The revised fixture list for December was published yesterday, and Celtic will play nine times during the month, which seems a little much.

It’s also worth noting the times and the venues, with early excursions to Dingwall and Perth, and an evening trip to Edinburgh, when all the drug dealers are at work.

There’s not one Saturday 3pm game, and whilst there are a few re-arranged fixtures in there, did they really have to cram them all in during the most expensive month of the year ?

Already having forked out for European quailifiers, season books and new strips, the raid on fans pockets continues.

The board have also yet to comment on the bizarre refereeing of Kevin Clancy at the weekend. surely there is a case there to make all referee reports available to the public, such as his thoughts on match incidents, and his summary of why he made certain decisions.

Football is a business, and each decision made by a referee affects that business. Those who invest in that business have a right to know why and how certain decisions are made.

And as for the ongoing Resolution 12 issue, combined with the doubts around the financial situation over at Ibrox, there has been not a word.

It appears they aren’t even worried about the lack of league sponsorship next season either. which brings us back to the ineptness of the game’s “leaders “.

In fact, it all seems a bit last day of schoolish, as rumours of a possible takeover continue to circulate.

“Said Willie , to Peter, as they sat down to dine,

His name is big Dermot, you will know who

and his time here at Celtic,

We hear some shite at Etims, but this one is on repeat…

And this is odd…especially now the Co op have been paid back, according to some sources at least..

Below is a copy of the Title GLA150218 which is Celtic Park.

Seems a low price even compared to Glasgow City Council’s usual discounting policy for land valuations given to Celtic.

How this sale can be done at such a low price under the noses of shareholders I dont know. Maybe that is why the asset was price so low. There is nothing in the companies notices to the stock exchange so it kind makes a mockery of shareholder protection.

If Celtic wanted to protect their asset it could have been put in a trust or something neutral rather than selling it for such a low price to a businessman – even though he’s ‘Celtic-minded’ and previously been a director:

Almost a year after Celtic Park was acquired by Willie Haughey then security over the asset was given to the Co-operative Bank for Celtic’s current 34 million loan & overdraft.

Now I don’t think there is anything illegal about a third party, Willie Haughey, offering up the security for a loan from the Co-operative Bank to Celtic but if I was a shareholder it would be a worry. What other assets have been ‘arranged’ in such a manner? Are players next?

Fergus McCann, talking of when he bought Celtic, says that the Co-operative Bank gave them a loan on much better terms than the Bank of Scotland. That was in 1994. But this was suddenly repaid by Celtic in 2001 under mysterious circumstances when the proceeds of a share issue did not get used for it’s declared purpose i.e. a training ground & team expansion. ( See previous post) Again Celtic shareholders did not have the full picture.

One thing is for certain is that Ian Bankier at the next Celtic PLC AGM will not be holding the title to Celtic Park unless Willie Haughey loans him it for the day. Somehow I think Big Dermot will be playing golf that day and may not attend the AGM.

Could that explain why the board don’t seem to care about several ongoing issues ?

Is their custodial period about to draw to a close ?

There is no pleasure on criticising the board, some would argue that is all some of us do when we get the laptops out, but there are times when questions have to be asked, and as a PLC, shareholders and supporters alike have a right to demand answers.

But as is often the case in the murky world of business, just as in politics, the issue isn’t finding the answers, it’s finding the right questions.

If we were simply to ask if what the board are doing about, say, alleged corruption at the SFA and Resolution 12, they would simply reply that they are collecting evidence, like they did when they asked for a smoking gun.

They got the smoking gun, so the follow up must be

As regards the SFA and their ineptness to efficiently run the game, why don;t the board at least attempt to hold them to account ?

More worryingly, why is a public company conducting any negotiations about any issue in private ?

Public companies should not be under the rule of institutions that do not offer transparency as a matter of course.

Caption
Ajer: I’ll distract him, you tie his shoe laces together. 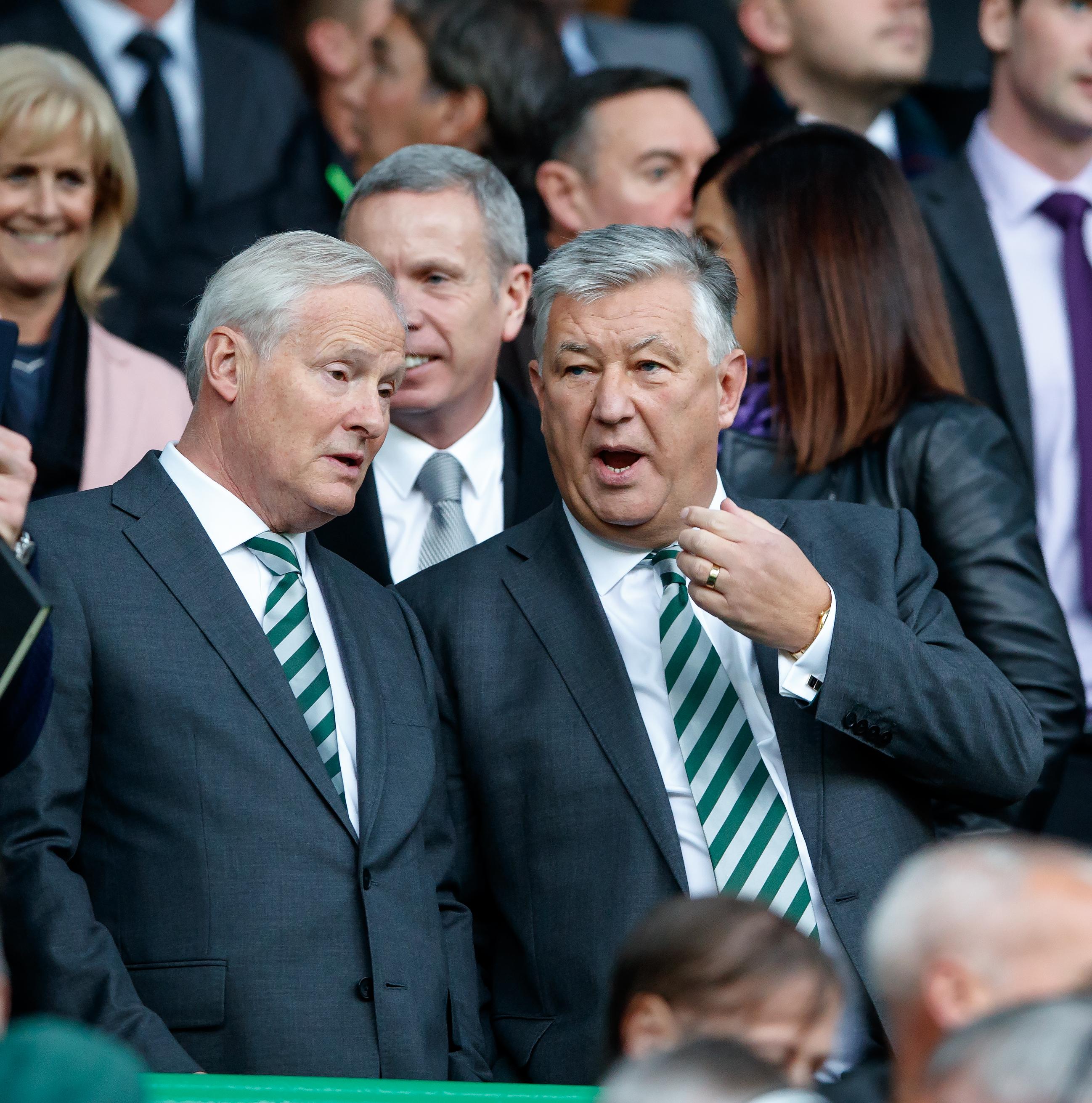 The Land Certificate copy shows a Superiority interest in favour of WH, not ownership of the land itself. This is a Feudal interest that existed prior to the Abolition of Feudal Tenure (Scotland) Act. Not entirely sure why anyone would buy this – especially in 2000 as the abolition of those interests was fast coming down the road (finally abolished in Nov 2004 I think). But anyway, it’s not ownership of the ground. If anyone has the time/inclination to do a quick search on Registers of Scotland, they’ll probably find the actual ownership of the ground is registered to Celtic. And the Charges Section on the sheet shown doesn’t disclose any security in favour of the Co-Op, so either they didn’t take security for a £34m loan (a tad reckless) or the loan is secured on another title – i.e. the actual title over the ground, likely held by Celtic (but that can be easily checked).

Yes, as i’d suggested – so there is nothing mysterious about the Title Sheet that Football Tax Havens have dug up. It’s an old interest in the land which will have very little practical effect (unless there’s a development burden which WH has sought to preserve post-abolition). It definitely does not mean that Celtic don’t own their own ground and the Co-Op loan is (or was) not secured by WH’s property. They were making a bit of a story out of nothing on that one.

My attention was the drawn to fhe name givemnthe tittle tattle flyong around.

Agreed that it’s a superiority title. Perhaps acquired as a vanity possession or to keep it out of the hands of others less, ahem, Celtic minded.

How does the chorus of that song go again peter?

“Oh grace just hold me in your arms ,and let this moment linger,

Caption: The pair of you fuck off!

Is that what they are saying to you and a mate

Look,Ian. Even when we’re in full public view no-one can see my right hand working you from the back.

Caption : ‘Have you any idea what this Resolution12 thing is they’re forever going on about’.

Some say the stewardship of the club is excellent, but the truth is the club is nothing without the fans, the CEO is ignorant of tha fact. Soon he will join UEFA, with a nice departure package.

As long as they do not rock the boat things continue, Sevco survives, for Bankier his comments about the fans says it all

Caption; ain’t it great to have a Saturday fixture at 3pm…

Caption “And another thing I bought with my bonus money wiz this invisible pipe”.

Caption:
“Not sure about these new Lite Werther’s… nothing to them.”

CJB that made me laugh oot loud ther WINNER

“Hey Ian, Have you got any idea why Lenny started with a right winger at left wing then brought on 2 left wingers?”

“Celtic are in the Green and White hooped shirts”

File under C for Clown.

0
The Cha
Reply to  San Miguel

It started in response to Rangers Tax Case and exclusively looks for dirt on Celtic even if its complete pish.

They reported about individuals loosely connected to Celtic who had some personal tax avoidance issues but ignored huns and others in similar situations.

The title is trying to claim impartiality, which it isn’t.

I don’t know if it is the same person who’s accurately described as “the state-aid nutter” but its the same loonball fantasy.

Caption: Lawwell- ” Can you believe the staff wanted the living wage “?
Bankier-” The cheek of it, we shall fight this “

Yes Ian, they’re called ‘fans’, supposedly? Just think of them as a necessary evil, for now….

….have you tried the minty lamb? It’s succulent.

Caption, so Ian, if you want one of those driveways I can get you a deal?

Caption: So Ian apparently it was a thousand pounds, I would have held off till the last minute then put my five hundred on the table…

Caption: I’m going to have to spit it out Ian one of the peasants I mean supporters gave me a pie.
My God Peter be a good chap and spit it out over the front into them below us, not in here beside us privalaged.Dont get caught out again Peter I mean we only pay 10p per pie and charge them £2.50
A club like no other my dear fellow.

Caption: Peter(Good Tim) says ‘Ralph doesn’t think that we should face the might of Ross County,Hamilton and St.Johnstone in the first 3 games in December despite having a massive,well paid squad?
Ian(Good Tim) says ‘Next thing you know,he’ll start on about tax havens and reproduce nonsense emanating from Sons of William’
Peter(GT) says ‘Bams keep talking about driveways,I wonder if they would care to have a shufty at the pay and bonus packages that those guys at Thomas Cook were on as their business follow followed that of the club/company still being liquidated?
Ian(GT) says ‘Thank goodness we are a well run business and not acting recklessly,financially,like the Sooside Sectarians.Surely nobody can criticise us.Remember the days we won fuck all?

Peter says ‘Did you see the fixture list for December? The might of Ross County,Hamilton and St.Johnstone in the first three games.Wonder if our massive,well paid squad can cope?….

Rangers are playing at the Wankdorf stadium on thursday. Their fans should feel at home

Caption.
Ian, it’s called association football, the object of the game is too…

0-2 Madrid down to Brugge

Caption
This lot have put our kids through private school isn’t it Divine?

Caption: Lawwell “Who will rid me of this troublesome (etims) priest?”

0
Desmond and The Dekkers

Caption: “you heading to the party conference in Manchester this year Ian?”

Caption: Bankier-” How is the John McGinn negotiations going Peter, are we close to the players signature “?

Caption: Yes the downsizing is going well Ian even the hoops on the shirts aren’t full hoops anymore.

Spurs tanked 7_2 at home by Bayern so much for the greatest league in the world.

Caption: Look venerable and esteemed at all times – that prick from ETims keeps photoing me. We can get mad on the crème de menthe later.

Caption: Lawwell-” Look, this ten in a row thing is getting out of hand, the fans are even expecting us to buy Hibs best player, John McGinn ”
Bankier – ” Ignore the fans, it’s just noise, Peter, anyway McGinn is at Villa now so don’t worry about that”.