Despite the best efforts of manager Alex McLeish, 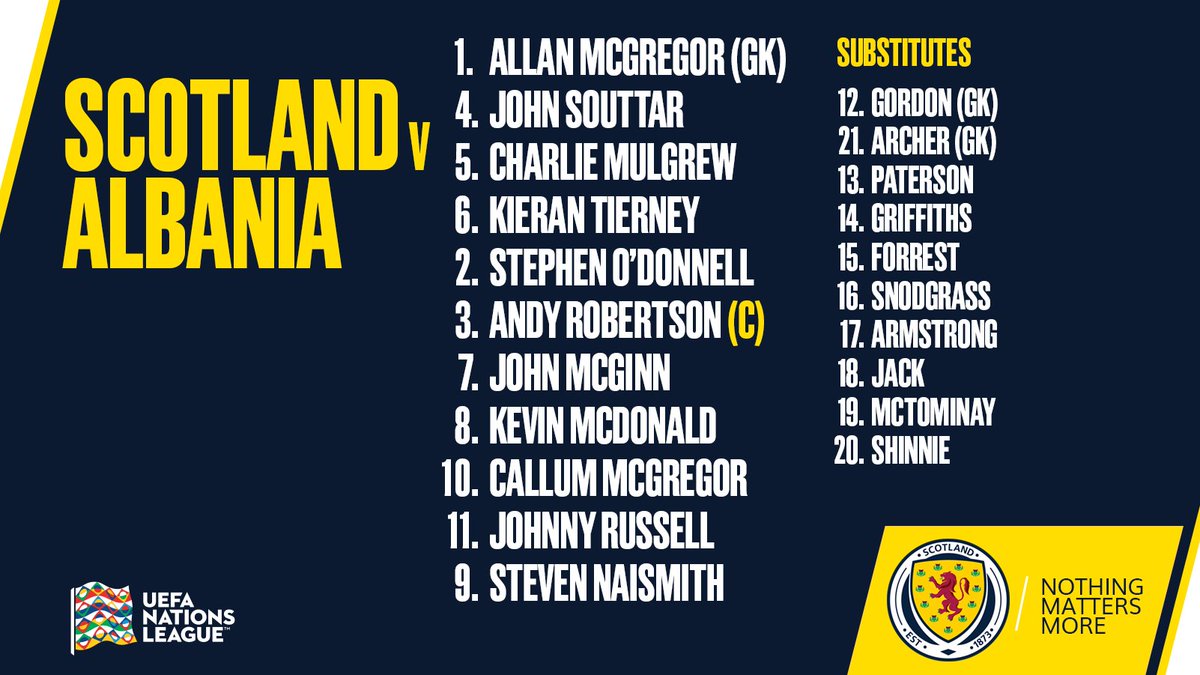 Scotland stumbled to a 2-0 win over Albania at Hampden in front of around 15,000 who couldn’t think of anything better to do.

Though to be fair to McLeish, his decision to field Kevin MacDonald bamboozled the Albanians, as they#d never heard of him either.

Credit for the win has  to go to SFA spy Malky MacKay , who submitted an in depth report on Scotland’s opponents..

An albanian is someone who is born with an absence of skin and hair pigmentation. This usually results in an albanian having pale hair, eyes, and skin. Some people who are considered to be albanian find the term offensive, although there are many different opinions about this in the community.

Steven Naismith continued his journey back to Ibrox with the two goals, although the first, as described on twitter by Fitba Tweets, was really a spectacular own goal.. 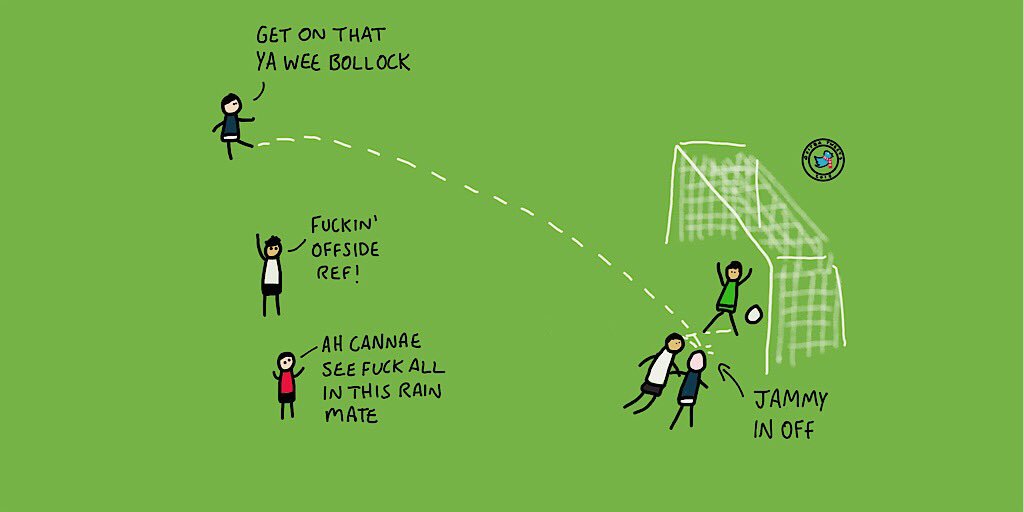 Meanwhile, the Scotland manager ignored the fact that he’d picked a banned player in Allan MacGregor, which was actually a decision taken to make sure the crowd went above the five figure mark, and claimed afterwards that

I’m building a wall, not papering over cracks.

He also said, when justifying the selection of Steven Naismith;

He might not look back, but he did look stupid with his team selection, which left out Stuart Armstrong, James Forrest and Leigh Griffiths, for an attacking  game against supposedly weaker opposition.

What is interesting is that the two players who should have been penalised for violent conduct by the SFa both started…MacGregor and Naismith, and had they not, the crowd would have been even fewer…

The media will ignore that, and push for some of the less appealing games to be played outside of Glasgow, yet the reality is that supporters are no lnger prepared to fund the corrupt regime currently in place at the SFA.

And as for the management team, they couldn’t even manage a game of rock, paper , scissors…

It means Scotland top their group, and its worth remembering that UEFA have arranged this particular tournament so that teams play other teams of roughly equal ability.

Thats a sobering thought when you watch Albania..

Scotlands next game is in Israel, and one wonders if they will have the balls to refuse to play over there. Some might argue that Celtic have and therefore we’re being hypocrites, but frankly I’d rather we’d taken a stance back then, and would hope we’d do so should the situation arise again.

The SFA currently has little or no credibility amongst fans.

This is a chance for them to regain some of it.

Having said that, there is nothing to stop individual players or clubs from refusing to take part… For me, international football holds little attraction anyway, and with news that both Leigh Griffiths and Mikael Lustig picked up injuries over the weekend, even less.

Thankfully , real football is back on Friday night.

Celtic travel to Paisley to face St Mirren, who have got themselves a new manager in a chap called Oran Kearney.

Its great to see them moving outwith the usual suspects when picking their man in charge, even if it meant removing Alan Stubbs before he’d chosen the wallpaper for his office, and this kind of forward thinking deserves praise.

Kearney, it seems , also knows how to work the media..

“I want to win the league because the day I started [at Coleraine] I wanted titles and trophies,”

Whats wrong with that ?

Had he come in and said the best he could hope for was avoiding relegation, he’d have been written off.

That sort of enthusiasm rubs off on players and supporters, and even if results do go against him, fans will appreciate the effort if he does get them working hard.

Good luck to him.

But not on Friday, obviously.

POLICE Scotland has been accused of trying to build an “informant ring” of football fans to provide intelligence on fellow supporters.

The force is alleged to have discussed offering financial rewards in exchange for information on the movement of fans on match days.

Fans Against Criminalisation, a group set up to defend the rights of supporters, said they had emailed Police Scotland Chief Constable Iain Livingstone about the claims on Friday.

A force spokesperson said: “We don’t comment on operational matters. If any individual has any concerns we encourage them to contact Police Scotland.”

I have a confession to make.

They asked me, and I couldn;t turn down the money-I’m like that-and what I did ahead of a recent Celtic match was inform them where all the trouble was going to take place..and they moved their forces accordingly… 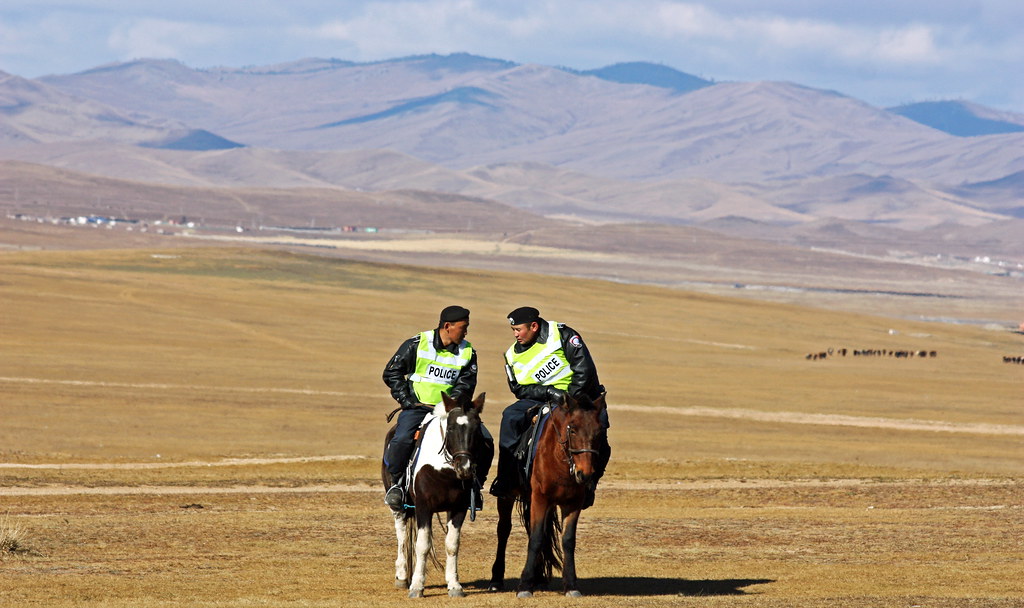 If you are approached by the forces of her majesty, please tell them everything you know.

I wouldn’t like them to think i’m in any way guilty of obstructing them in their duties.

Then they won’t trust any of us and will go back to beating up drunks and foreigners.

If in doubt remember this phrase..

The game has been moved to Friday night for television, which is not when football should be played. apart from the inevitable Friday rush hour traffic, it means that fans have to spend time with their families at weekends, which can be expensive and stressful. 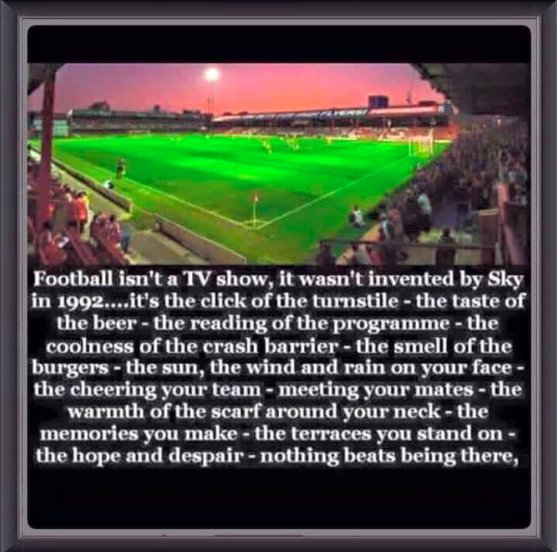 The old romantics among us will understand that.

Some of us even understand this, an early example of a keyboard manager, from and old Gola magazine… 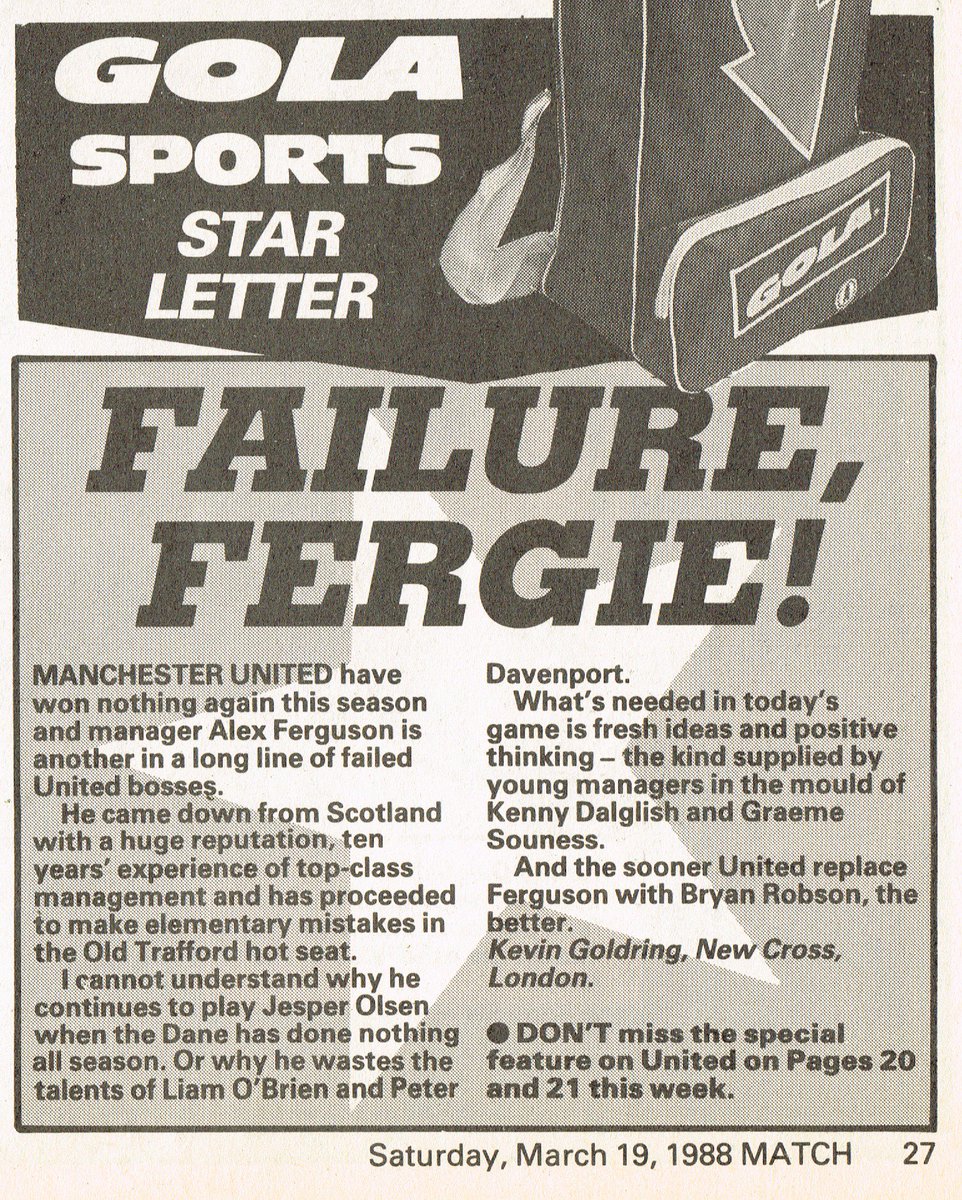 Thats the beauty of football…we all see things differently, though not quite as differently as the chap venting his rage above.

The beauty of the internet is the delete button.

The printed word remains…so that we can put it on the internet.

As Michael Gove, who wants to be a politician when he grows up, has discovered..

Though there is a campaign by the police to encourage it.. 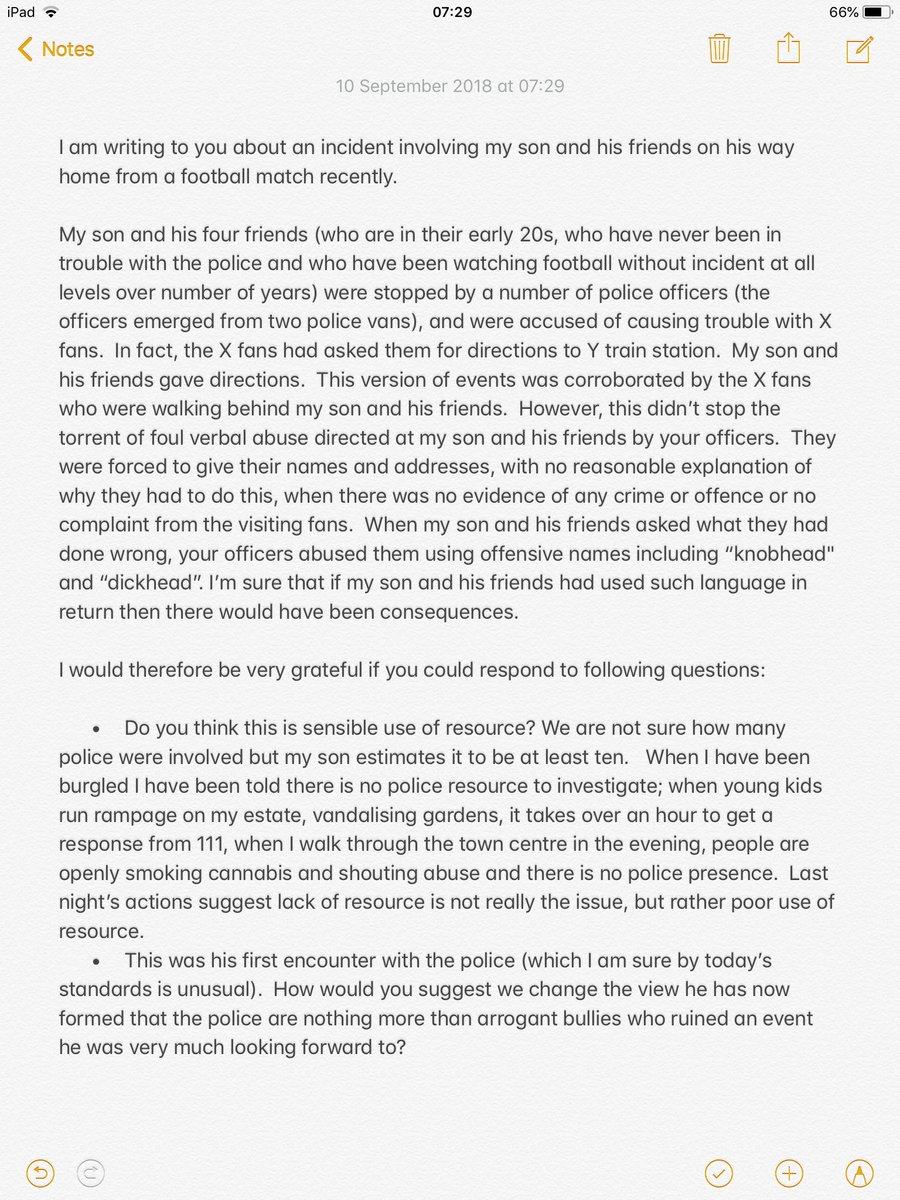 The police see football fans as an easy target. Their motto is simply “Approach, Aggravate, Arrest ”

Speaking of people who make things up… 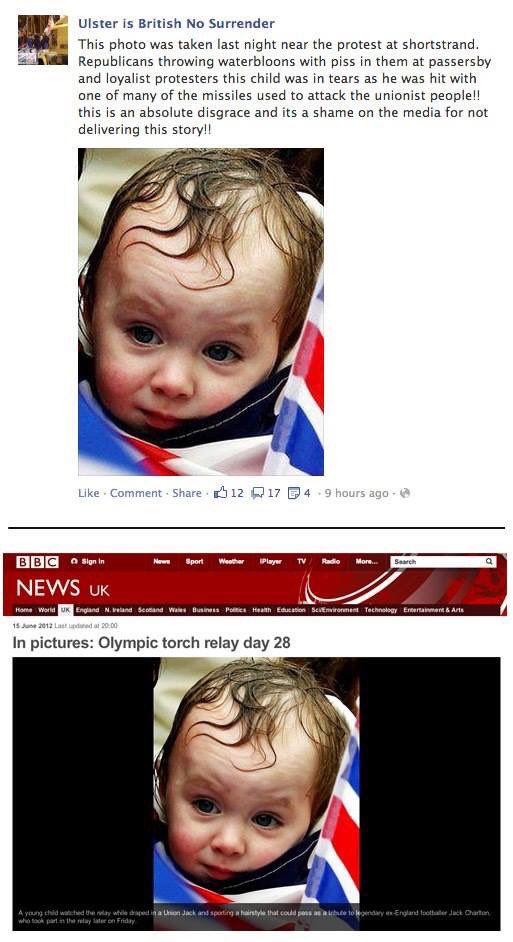 We’ve come to expect it from certain quarters, I guess.

Caption competition…yesterday we had this..

Of course,she’d be out of my league in Scotland,what with thon minimum pricing.

Today, at the request of the Scotland players, we want to know what he’s trying to say…or do..or whatever. 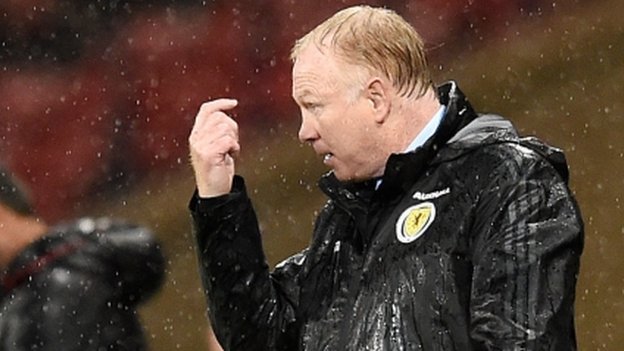 McLeish trys out some moves from the Peter Grant school of pointing. Shows promise but not quite there yet.

Caption…. Greegsy, quick come here. Has HMRC been in touch with you yet?

I would be really surprised if the cabal refused to play Israel.

Israel is an an apartheid,racist state.

A new inquest into the Ballymurphy killings featured in the Ballymurphy Precedent is to start in November 12 th at Belfast High Court. Maybe Weered could keep us advised if anything significant develops.

I sent an email expressing solidarity with the families of those murdered by the British state and received a great response from someone involved in the campaign. If anyone wants the email address and wants to do similar let me know.

Caption: I only had the one offisher, honest.

See me ? I’ve not got the brains to put my hood up never mind pay my taxes

Urm is there a game on

Know that thing when your drunk ,and you try to snap your finger and thumb to get someone’s attention and you can’t quite get it right ?..

Caption:big Ek tries to work out if it’s only corn under his finger nails

Caption “I don’t have a full bottle in front of me, as I’ve a full frontal lobotomy”

Caption…who the ferk are you pointing at..c’mon then let’s be having ye!!

Never doubted Peter Grants desire, determination and love of the club but I think his footballing ability and intelligence were limited. Still…where’s my medals and caps ?

He was amazing at pointing whilst getting nutmegged

You can’t get away from sand, can you?

Caption: Even Fingermouse wouldn’t turn up to watch that shite!

Fucking weird,man. See the closer I put my finger to my face,the bigger it gets. Right up close,it’s like The Loch Ness Monster!

I’m loathe to put stuff like that into print,first time for everything. AM is not a well man,IMO. I hope he wins the lottery tomorrow night if I don’t.

Oh, where did the bluebells go?
And why is it raining so?
It’s so cold
I won’t sleep tonight
Nobody’s saying everything’s all right
Still I can’t close my eyes
I keep getting pummeled with this friendly shite

New site which is slowly getting it right!

Thank fuck the real footie will be back again soon. Griff seems fine and I don’t think Lustig’s problem’s all that serious either, just a bit of cramp.

With Scotland finally managing to win a game at last, here’s a funny short vid about crime in our marvellous wee country.

Caption: McLeish encourages those who refuse to sing Flower of Scotland (and/or mumble GTSQ under their breath) to join him in a rousing redition of “I’m a Little TeaPot…”

see if that disnae winnit ralphs oan a ebt

I remember being in the old Blarney Stone before the cup final in 88. The door burst open and a number of polis came into the bar asking who the kids outside belonged to. One of them was my son and the other my nephew. I had been checking that the boys were alright regularly. The polis came into the bar looking for trouble and there was another van load down the street, just in case. They never got the trouble they were looking, lucky bastards.

CAPTION….
Scotland manager tries to galvanise his troops.” Look boys keep it simple. Football is as easy as E.B.T.. Naw, wait, that’s no quite right. Where’s that fag packet again. I’ll get it right in a minute. Just don’t let them have the baw till I search ma brain”.

Not a hope in hell them not playing the game… could be seen to be a country with some morals by playing Palestine in a friendly.
They kick off now 5 pm, against Qatar.

Of course Scotland would play Israel and any other country currently not on bans from FIFA or UEFA. North Korea, Venezuela, Saudi Arabia and plenty of others are all playing happily in international competition without sanction for their domestic political situations. If we are to take the moral high ground what list of countries would that be and who would decide that?

Caption; EBT Eck thinks that if he looks at the end of his finger long enough, he’ll go cock eyed like his hero Dave K……then the ibrokes job will be a shoe in when gerrard gets punted.

Caption: Broony… Yer not the first to say that there’s fuck all in there..

Caption: I’ve got some proper players on the bench behind me. Better do something!

Check out this dirty bastard……

Caption: Look at the bench, don’t make me being on a Celtic player.

Caption “Why Does It Always Rain On Me?”

jimmy remember in the bad days we used tae sing this

Jimmybee,
It was us, the support that are the lucky ones, lucky to have witnessed Tommy Burns play with such passion for Celtic.
God bless you Tommy Burns!

Caption
Where the Fxxck am I?

The Polis, shower of arseholes, in the sixties they aggravated Celtic fans, today still the same. You would neve see that attitude at a rugby matches.
I have raised concerns, but get the usual
‘ nothing to be seen here, move along ‘ letter