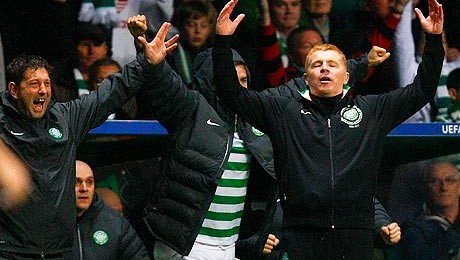 Thats me sorted for the final. My favourite nephew lives in Ealing, and therefore I don’t need to pay over the odds for a cupboard with a bed come May in London.

But I’m still fairly sure that he agreed to house the Lennon CSC purely because he doesnt think we’ll actually make the final. He’s not alone. You see, down in England I’m getting sick of hearing how we done well against Barcelona, probably in the same way David stopped doing press interviews after his sensational knockout of Goliath.

Its beginning to really irk me, but on a positive note, I got to use the word “irk” in a sentence. Thats unlikely to happen ever again.

Am i the only one, and this question is for others who are living in England, to improve the gene pool and raise the average IQ, who thinks that the media, having no special club of their own, are going a wee bit over the top with the unique atmosphere, the fantastic performance and all the other stuff?

And the constant pats on the back, and praise from colleagues at work, or in the pub. Look, I am fully aware of Celtic, fully aware of what we are, and that might explain why I’ve been going there for the last forty years or so.

Right, got that off my chest as well. No wonder people think I’m a miserable sod.

Neil Lennon will make a few changes to the side that beat Barcelona, as Mikael Lustig has hurt his hip, and the other ten are still somewhere in the stratosphere. The injury list pre Barcelona hasn’t shortened, so its a chance for a few fringe players to make a name for themselves. Although this guy should be a cert to start.

For about the next ten years.

Tomorrows game against St. Johnstone cannot be taken lightly, as there are an awful lot of teams who could overtake us if we slip up, and its essential to win this league. Footballers are a strange bunch, and we can well do without the Perth fans singing “Barcelona must be shite ” as well.

And we have a new “Performance Consultant”-Jim McGuinness, who led Donegal to the All Ireland title this year, will work at Lennoxtown will will help out with the youngsters.

Nope, I don’t know what a performance consultant is either, but Lennon and McGuiness are both delighted with the appointment, and that good enough for me.

As per usual, the media have not only decided that all of our players are ready to move on, and will continue to speculate on which English team will fulfill their career ambitions-in fact Talkshite had a feature on “Five players too good for the SPL club”, instead of one about “Fourteen Barcelona players not good enough for SPL”

Now it has moved on. Its Lennon they think will be out of here. Graeme Spiers, a man respected for his journalistic contributions by Graeme Spiers, claimed on Radio Clyde that it was “unrealistic” to expect Lennon to still be at Celtic in a few years time. aye, bullets, bombs , racism, physical attacks and threats to his family can’t shift him, but as soon as he is on Sky TV having masterminded a win against Barcelona, then he’s off.

Lennon himself has had something to say on this.

“Would I get a better night than that anywhere else in football, I doubt it very much. It is what makes the club unique, there is something special about the club on a European night,and it manifested itself in all its glory on Wednesday. The church service was a very special occasion and made me think about the history of the club more, the founding fathers of the club, and what it means to so many people, not just here in Glasgow, but all around the world.

There was a great ambience and I got an inkling that there could be something special in the air for Wednesday night and it was a very special couple of days.”

Rod Stewart seemed to think so, he was in tears at the end of the game.  I know, they kept that quiet, didn’t they?

Thing is, he wasn’t the only one.

There is the idea that a few players are up for a move, and we have heard of a couple of enquiries, along the “keep us informed ” style, for Wanyama and Forster, but other than that, its a case of pure specualation.

However, the players will have to want to leave, and Joe Ledley summed up the mood in the camp, as he is in talks over an extension to his contract, which has 18 months to run.

“There are talks going on. I have one more year after this season, and hopefully I can stay. Its a fantastic club, I love playing for Celtic.Talks have started and I have spoken to my agent, so hopefully something can happen. People are always going to criticise Scottish football for some reason. I think its a fantastic league. To play in the champions League is a huge honour too. It was a great move for me to sign for Celtic.”

Which puts me in mind of Joe walking round outside the ground last year, after winning the league, with his phone in front of him, filming the occasion, and loving every minute of it.

It is a special club, but we knew that already.

The dates for the semi finals of the League Cup have been announced, Celtic will play St. Mirren at Hampden on Sunday January 27, and the game will be on BBC Scotland, now that their favourite team are out.

And speaking of them, they have appealed for supporters at the Peterhead game today to help to distribute leaflets plugging the upcoming share issue. This move to appeal directly to the fans has come after the company dealing with the IPO (initial public offer) has looked through the pledges, and decided that Billy King, Mick O’Fenian, and Seamus Donnelly might not actually be serious bidders. Well I know for a fact the latter isn’t. So thats ten grand they’ll never see.

And the Royal British Legion has emailed me, asking if I want to contribute to the Poppy Lottery, to help those wounded in war.

Now , anyone who considers themselves a right minded soul abhors war of all kinds, and the damage it does to people, but perhaps the organisers might ask the Rangers for a contribution while they are glorifying the Army today, you know, the Army that they have cheated out of around £100m

Things are not going well at Ibrox. It seems Charles Greens promise of no redundancies is just another of his lies. But this time it seems to have upset the bears.

“Front door Liz”, the face of hospitality at Ibrox is getting her jotters. And although the demise of their club, and subsequent liquidation didn’t spur the legions into action, it might just be that this will.

Did I really just type “The face of hospitality at Ibrox”?

Bloody hell. are the pubs open yet?

Yesterdays teaser revolved around David Murrays dad, and the story, featured in Phil MacGhiollabhans excellent “Downfall” book that he used to have a few racehorses and a coalmine and didnt always fill in his tax returns correctly. He got eighteen months.

The link between father and son and their accounting shortcomings never made the news, which isn’t unsurprising, as the press at the time of Murrays peak were too busy with their heads firmly planted between the great mans butt cheeks. Well, I suppose if he put their tongues to good use, that would stop them from speaking out.

Following on from that question, as we meander through the years and our own memories, racehorses and gambling have often featured in the story of Celtic. So, who got the sack when Fergus McCann checked the phone bill, and what was that all about?

That would be Luigi Macari.who phoned a tipster hotline and forgot to hang up.

I have not been able to post my original again. Is there a word limit for comments? Maybe that is why. If so I will reduce it. I certainly can be a bit mouthy at times. Need to go off for a bit so might not respond to you immediately.

I thought louigi Macari got sucked for being shite at his job, nd living in England?

Maybe he phoned tipsters as well. Sure fergus would see the funny side……..

Though if you get sucked for being shite at your job, it puts Mccoists recent performance into perspective…..

On Satellite TV last night down here in Southern Africa there was a special on Celtic and Wanyama – about 50% Celtic, 50% Wanyama. Wanyama obvoiously worships Lennon (‘he recognised my talent and nurtures me’) – I didn’t realise that Wanyama’s elder brother played for Inter – comes from a family with a long footballing tradition.

I too came from a long footballing tradition but I still got sucked for being useless. I enjoyed it, I have to say.

i got sucked as gpt coventry third team manager for being shite – same day as kenny ogliesh got sucked from nowcastle in fact. so i’s not uncommon!

I’ve been trying for a while now to get sucked. Not a lot to report I’m afraid!

What a sucker, Lenny. But then, life does suck sometimes :>)