Stewart Regan has resigned as the CEO of the Scottish Football Association.

The news broke earlier today to a round of applause from everyone with an interest in Scottish football. Though not those that run it, obviously. 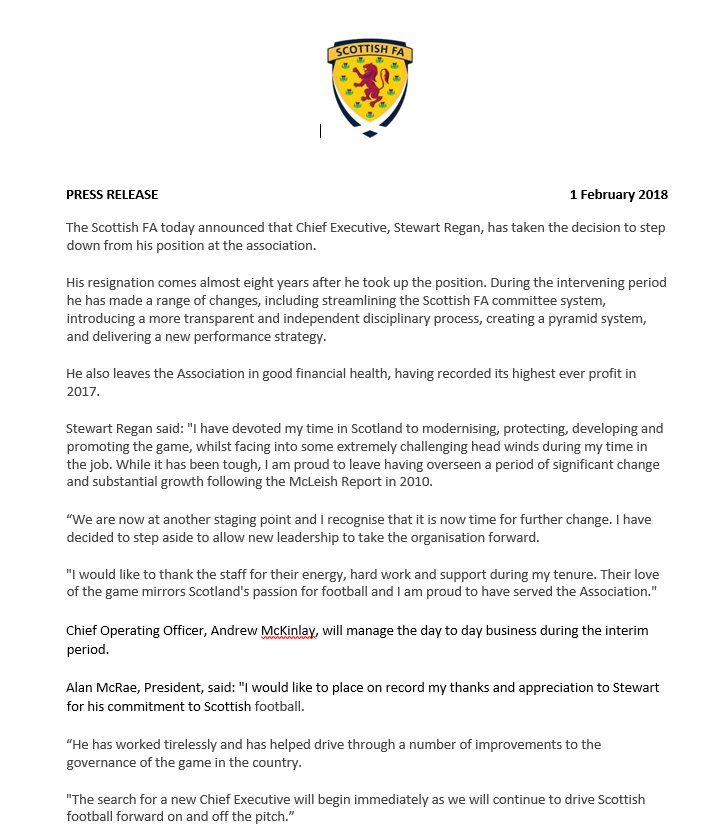 We thought we would look back on his near eight years in charge with a tribute to all the good things he has done for the game, but we couldn’t think of any.

What he could do, to perhaps change our perception of the way he did his job is to maybe allow us to have a glimpse into the secret world of the SFA.

How decisions are made, who makes them, that sort of thing.

Maybe he could give us the full lowdown on what really went on during , for example, the granting of a licence to play in Europe for a club that has an overdue payable.

Or perhaps he could enlighten us as to how referees are really chosen, and why Vincent Lunny felt he was told to drop a case against one who had been found to be telling an untruth.

what about the Five Way Agreement, and the accusations that lower league clubs were pressurised into accepting the promotion of a new club to higher division ?

What about letting us know who is responsible for the poor revenue raised by the television deals that have been struck over the years, or the lack of major outside investment in the game.

Does he have more answers now he’s not being worked by his puppetmasters ?

Until we know a little more about his tenure, and the goings on behind closed doors, then any golden handshake, and they do like their handshakes at Hampden, should be withheld.

But I’m sure he will want to clear his name and show us that he really did care about Scottish football, and perhaps help to apportion the blame onto who is really responsible for the mess the game is in, because of he doesn’t, we’ll have to assume its him.

And what about those on the SFA board ?

They are now in the front line for any criticism aimed at the authority, and the first thing they must address is if they feel , that as a part of Regan’s crew, they have done enough to stay in a job.

One of them will likely be chosen to take his place.

The most important thing now is that the clubs rally against this.

A change of face is not enough, its a change of the SFA that is needed.

With Regan gone, those who remain will be considering their positions, as this could be a major breach of the walls that surround and protect them.

We cannot expect the media to join in any demands for change, so the Scottish football fan must pressure their clubs into making sure that the changes to come are for the good of the game, and not for those who are in power at the moment.

After all, as CarlJungleBhoy tweeted, there’s a patern emerging..

The clean up has begun, lets make sure we leave the place spotless.

Thanks to Only4togo on twitter, we can play Regan out with a song.. 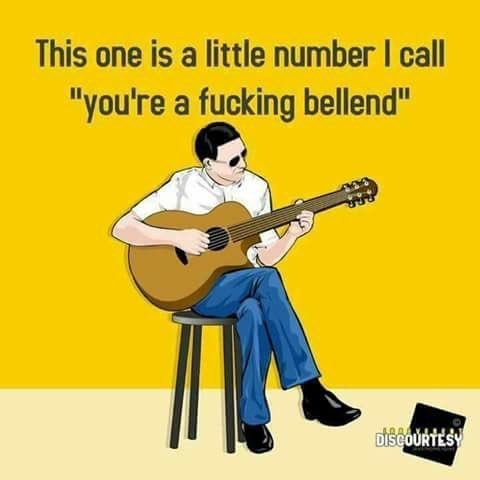 Great article, I’ve been trying many times to get Roy Greenslade involved but something happened at the Guardian when we tried to get the Res 12 ad in there, really weird. I thought he had balls but I was wrong. These Huns and masons have some power.

The Guardian coverage of all matters Scottish is strictly on the square.

I actually feel like Una does when a soap is about to start.

Monti are you damp

I am not one for falsely acknowledging someone who has been an abject failure. Regan has caused more damage to the game in Scotland than any five people ever could. He has lied, cheated and been turning a blind eye to the corruption for years.So why the “pat on the back”? He is a disgrace. The problem is, this is only the thin end of the wedge there. No-one on that SFA board are interested in promoting the game. They are only interested in promoting the newest club in Scotland, and what appears to be things they personally benefit from.… Read more »

Not before time,dirty scumbag.
An absolute disgrace to Scottish football,that’s what happens when you tried to keep Sevco at the top in fact you did your best to keep them as Rangers well that backfired well done.
Hail Hail

Nicely timed article today Ralph.Regan gone,good but who “follows” him? As an Englishman he wasn’t steeped in the Freemasonic fraternity,merely a puppet as you stated.The really dangerous enemies of Celtic are still lurking in the shadows and will be manoeuvring at this moment to cement their power positions.These “peepul” are the ones that don’t walk away,they are in with the bricks.

Wait til biggus dickus hears of this 🙂

Ralph you were pertinent, asked the right questions but I won’t celebrate. I predict we will hate his successor even more. Bawsman reminded me of the scurrilous events around the Guardian and why did Kheridinne Neitsen. (Sorry about the spelling) eat humble pie, we still need to know who the person or persons at the BBC, masons maybe, are who protect crooked elements in Scottish football. Did the Guardian get worried about some form of legal threat, sounds like it, but they don’t have to accuse anyone of anything just pose questions.

A while ago, i reviewed a book by a chap called Stephen o’Donnell. It was based around a guy who wanted to do a chat show on the BBC. He told me his research allayed to a bias in the corporation. We’ve a big battle on our hands, but the first victory was today. As auldheid said earlier ion twitter, it’s the beginning of the end…

Aye saw that too. Made me laugh. Regan’s departure is of less relevance than Farry’s exit. In fact it’s the exact same thing. Did you get thrown a bone last night amongst the continuing orchestration? I’m not having a go just asking.

I’ve been lucky to have loved, and listened to, all kinds of music in my life. From the ‘protest songs’ and before, including Soul and Tamla during the great era of the Stones, Beatles, etcetera! But, the IMPORTANT music, the music of ALL music was to learn that Regan had gone. This is but a crack in the levee, albeit a more important ‘crack’ than the little fucking shit who’s departed; It’s a real beginning for Scottish Football to rid itself of the perputually rancis scum of ‘rangers’ and those flies who hover over a new, disgusting, steaming shite; pretendy… Read more »

So farewell at last to this corrupt arse, to his lisp & lack of balls…
He quickly got the message there it was written on the wall…REGAN OUT!

As one door closes another opens as they say,
Only this time the door better be made of glass
No more hiding behind QCs and cloak and daggers approach to the running of the game, we all deserve transparency and a leader who will lead from the front, well done Ralph, a great article
Now lets go after that clown Doncaster

During the Sevco game last night the BBC Scotland commentator said he couldn’t tell if it was a penalty as he was behind a pillar. Yip he was watching the game in the lodge. I fear the new guy will be a fat bowler called Willie. Time for us to flex our muscles. No Huns at or in Hampden.

Methinks that the canary Regan will sing now 🙂

Weered he was probably told to walk to preserve the hidden truth.

Jimmybee I wonder if he got a golden goodbye

Jimmybee did he get a golden goodbye

It all depends on what type of send-off he got!

Im disgusted he was allowed to walk away.
He should have been sacked.

Agreed. Would love to hear him sing but it’s not going to happen. Resignation “deal” will have a silence clause and a pay off attached

SEE THAT MACCA …..HEES NO DAFT

no matter how hard the sfa tried they couldnae stop this

Well, having read, and partially re-read the total pish from Regan and the other free-masonic cunts at Hampden, I offer this, and only THITH: I (having witnethed Thtuart Regan’th tenure, and rethignation, I THAY THITH) He woth a light, in Thcottish Footie; mith-underthstood by motht. Okay, let’s go close to truth: Regan, a disgusting, self-centered little piece of shit was employed by the SFA in 2010. At this point, his credibility was shot to pieces as he tried to shoe-in a financial deal for Yorkshire Cricket against ALL of the principles of that club. Point is, his history was of… Read more »

heers wan for tic toc cause that crackpot misses hame

Aye, Charlie, a nice wee thing to do…….
I always understood ye’d rather dae a favour (tae a Tim)…
Ah’ve nae reason tae change ma mind. Thanks Charlie, Pal.
Long live the Gallagate and a’ its stars; those aware and oblivious too. Gallagate All Stars?
If there is such a thing as a god, ah really hope he has a special place for you, in His heart, Charlie.
HH FC not PLC and COYBIG, later today.
HH

this wans for monti …………even though hees been a greetin faced cunt awe week..

a dont no if bobs got hope …..but cagneys a tim

see if these 2crackpots urny tims it must be thur upbringinh

Right,Ralph.
Last two articles were on the money.
However,your diary is your bread and butter,a real labour of love.
Nothing since Tuesday ?
I’ll need to go back to Twitter,at this rate.lol
BR,” happy with everything he asked for in the window.”Would love to see your take on this,and Monti’s ? lol
We’re in a great position !
HH Brendan Rodgers CSC

CS,
Good morning.
IF these players were the ones Brendan wanted and the board have delivered these players,then i’ll just need to accept the manager has the squad he wants at this time.
There is a league championship, a Scottish cup & a Europa league to win, so it’s time to suck up the disappointment of the window, back the manager & players & fuckig go for it!

I remain disappointed in the recruitment process at Celtic.

Monti,
heres hoping that BR recruits better players in the summer. I was disappointed at who was brought in but still have faith in the manager. I hope yer good mate.

Morning,Monti.
Wholeheartedly agree,’re comments.
BR likes to develop young players.Ajer can be a top CB for us.Hendry also,has this potential.
Yes,I would also have liked,an experienced RB and another quality CB,but I faith that BR knows what he’s doing.
This,like last season,can be an historic one,as we dominate Scottish football.
HH,bud.

I,d be more than surprised if Hendry proves to be anything more than just another SPL player,Scotland just doesn,t produce players of the calibre needed to compete at a higher level,Karamoko Dembele the only real young talent.

Good post. You made your points and now it is time to move on.
If our performances dip or if we get gubbed by Zenit then you can return to your original issues.