Merry Christmas to one and all.

I hope that Santa Claus has delivered to you and yours not only the material wishes, but that feeling of warmth that comes from having those who matter around you.

Until about teatime, at least, when you wish they’d all fuck off again for twelve months.

My kids have all grown up now, and so the magic of Christmas morning has somewhat dissipated these days. I miss the look of disappointment on their little faces, and the screams and tantrums at four in the morning.

But how times change…after all, nothing is forever, and last night when I dropped one of my sons off at his place, I actually asked him not to get plastered and ruin Christmas dinner …

This from a guy who once cooked chips and mince because he forgot to defrost the turkey.

I’m up before everyone else this morning, and I can;t wait to see her face when she opens her present. I’ve put a lot of thought into it this year, paying careful attention to any little hints that she may have dropped, and after she has had the odd moan about me leaving the mud off my boots on the kitchen floor, then I think she will really appreciate her new steam mop.

At this time of year, I often wonder how other marriages can survive without these thoughtful gestures.

first, here’s a message from Brendan..

The holiday period has a couple more games to offer before the winter break, and Celtic will face Dundee at Dens Park tomorrow.

Its likely the manager will stick with the team that crushed Aberdeen 3-0 on Saturday, a win which puts Celtic eight points clear, as he attempts to hit his double digit lead before the break.

Those of you who watched that game on a stream would have been horrified to see it interrupted by one of thiose adult movies with a limited plot and even more limited clothing budget , though it could have been worse.

Imagine of you were watching one of those movues and a stream from Ibrox interrupted it ? The shame…

Then, on Saturday, Celtic host “rangers ” in what could be the last Glasgow derby with the fledgling club, after Lord Bannatyne upheld the Takeover Panel decision which casts Dave King into the clod shouldered wilderness of the financial world.

Although his poodles in the media are talking of his planned appeal, in reality he won’t get one. He can appeal only on a point of law or fact, and since the judge has already dealt with that, it can’t happen.

He’s staring down both barrels.

All they can do now is bumble along and hope there’s a massive uptake of season books, which will bring a few quid in, but its like playing monopoly when everyone else owns houses and hotels. Sooner or later you will drop out of the game.

Admit it, you’re grinning, aren’t you ? 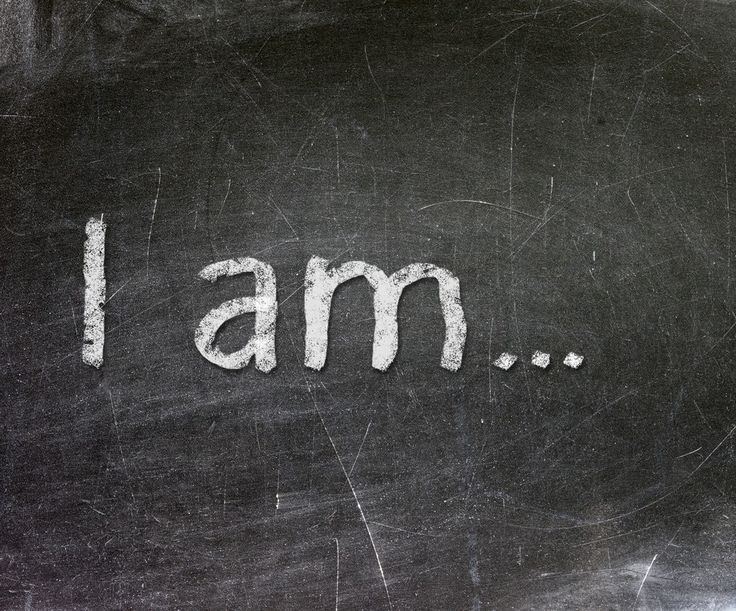 I might even go to the game. It could be my last chance to see the new club.

And after they lost to Kilmarnock, where a fat tv pundit scored twice against them, it could be quite a day for those of us who like to feel their pain.

Speaking of feeling their pain… 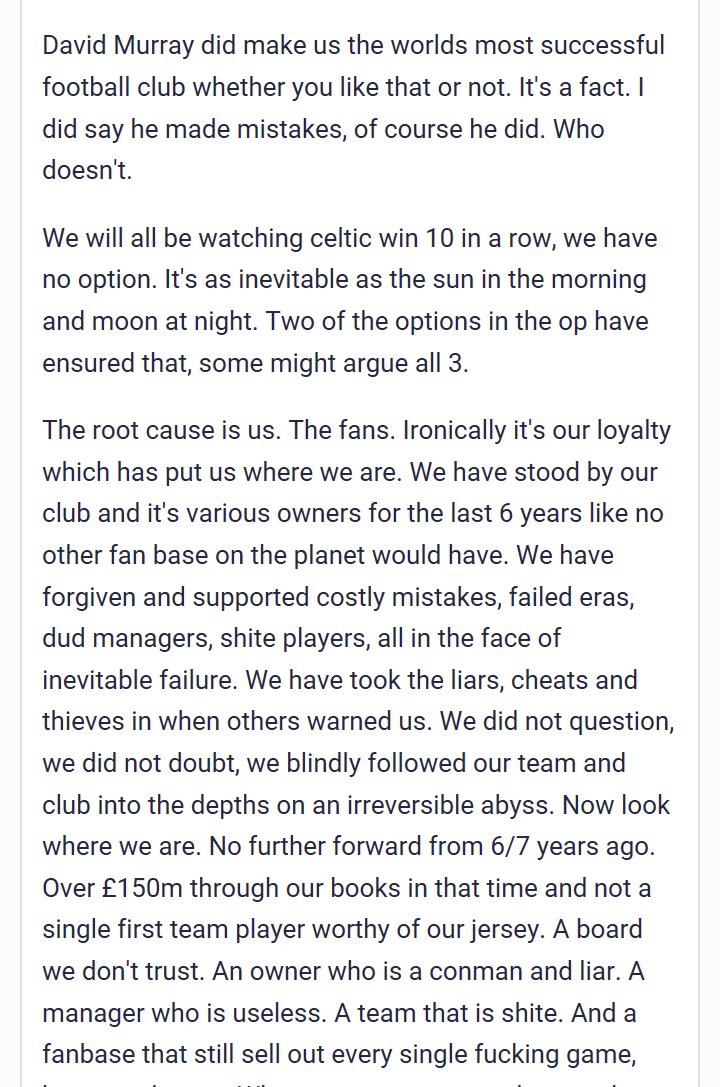 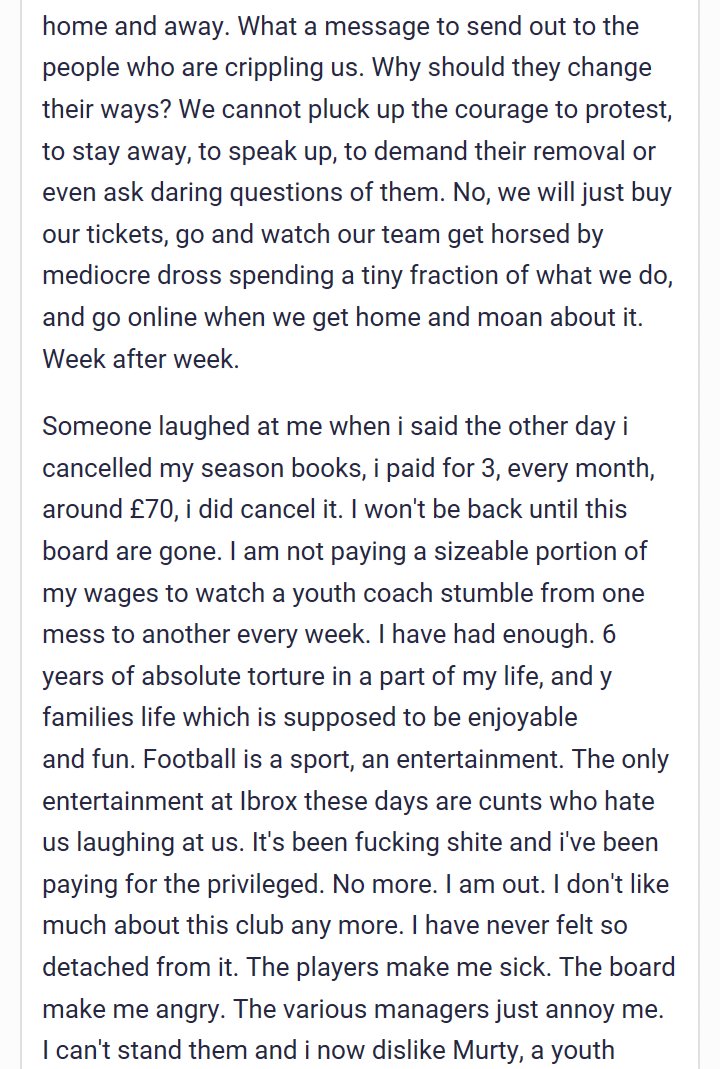 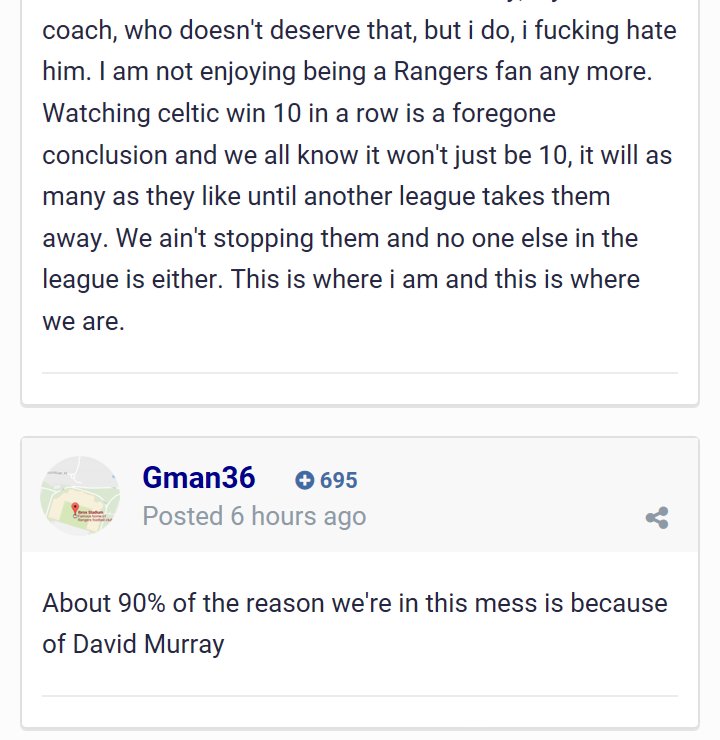 Tis the season to be jolly indeed. 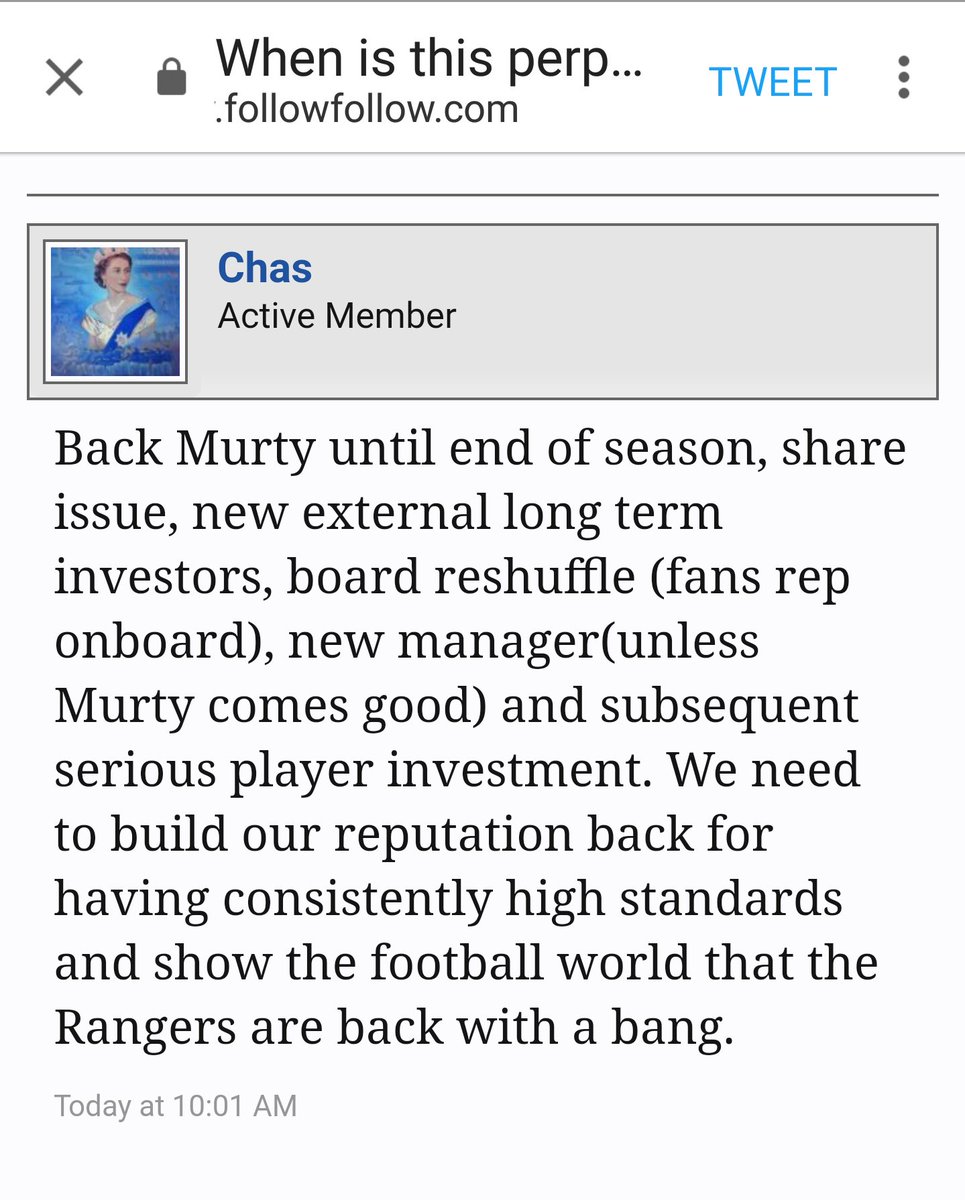 But theres always a grinch around.. 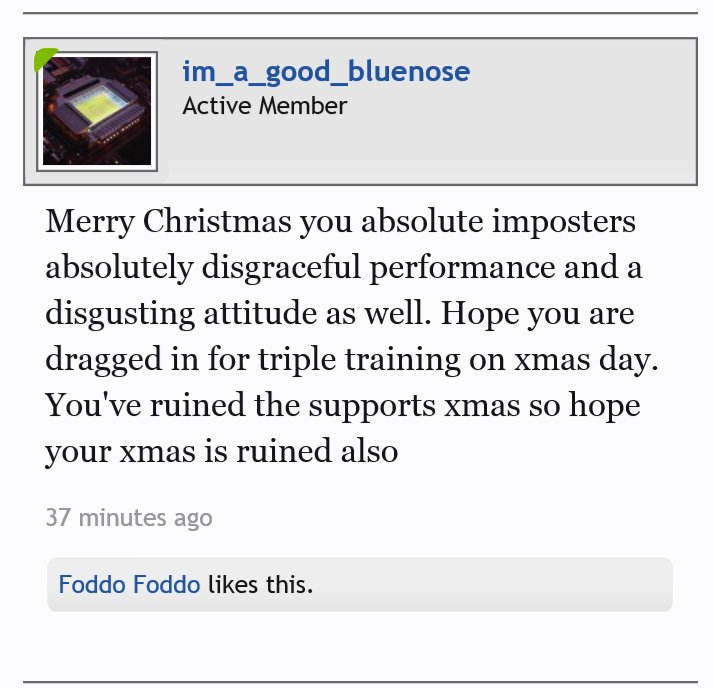 The players, though, appear to have their hearts in the right place..

Graham Murty took his players to Yorkhill 2day for the Christmas visit “some of their stories would break your heart” said 1 of the children.

On Saturday we showed you this.. 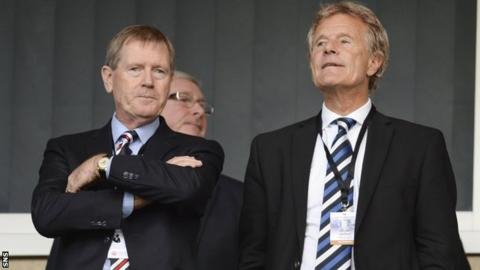 And now, a christmas poem…

‘Twas the night before Christmas,
and all through the house,
Not a creature was stirring,
not even a mouse…
I really should have invested in one of those carbon monoxide detectors.
Have a great day!
0 0 vote
Article Rating

Ralphy… 😉 Brilliant. Currently standing in the kitchen jumping up and doon trying to compact the turkey and please remember…..
Turkeys don’t shrink to fit inferior ovan’s.

Mike, I hope you didn’t buy that ovan from Dave in Govan?

Its not proven that the ovan came from Dave in Govan.

Just stick your nose up it’s erse & light a fire underneath it….skewered.

Merry Christmas Ralph and to everyone on etims
May the true spirit of Christmas be in each of your homes this Christmas morning.

Merry Xmas to all the E-Tims crowd!

Insert your suitably cringeworthy, but nevertheless very heartfelt and touching seasonal message in the space provided above

Merry Christmas Jimmy and if its true about Dembelle then there will be a big sell on Santa clause.

Merry Christmas Ralph and all etimmers! I hope it is all you wish for.

Im sure as a youngster in the early 70s i attended a game at Celtic park on Christmas day.
Im also sure it was against Hearts but cant remember for sure if my memory is playing tricks and maybe it was boxing day.
Anybody remember this fixture probably 1970/71 something like that.
All i can remember is my uncle John coming round and sayimg you want Christmas dinner or a trip to see Celtic a no brainer HH

Could be correct jb.Between 1897 and 1971 Celtic played 15 games only losing one, those were the days… Pensionerbhoy was a ballbhoy…

Could be correct jb.Between 1897 and 1971 Celtic played 15 games only losing one, those were the days… Pensionerbhoy was a ballbhoy…on Christmas day, oops

It was Christmas day Jimmy. I was there with my dad. 3-2 for the bhoys.

Caption: Graeme Marty practices his trademark manoeuvre for the “Dancing on ice” final.

P.S. The guy who invented the packaging wire/screws on kids toys needs a fucking shoeing!

What’s this pish about Celtic accepting 18m for Moussa, from Brighton?

Its on sky sports m8 looks like its going to happen

Why are we accepting 18m tho?
I thought his price was 27m?…….and fucking Brighton?

The story is being denied by Celtic.

It’s just that Monti – Pish – made up story

Caption:Dave says we have to practice as we are on thin ice over the next few months.

Caption: Graeme Decides football isn’t really for him and looks for a sport where he can do the “Murty” and be appreciated.

Caption. Murts celebrates being given the honour of being the last ever Sevco manager

Sky sports fly’s its Kite as per usual its talking shite!!

Merry Christmas one and all.

Merry Christmas Ralph and all at etims, also all the best for the coming year. Great Diary today as always, keep up the good work. Moussa story rejected by club HH

Ralph, bought the wife a matching bag and belt for christmas.
She was not amused.
Don’t know why, the hoover has never worked so well.

Merry Xmas to all.

Caption: Murty celebrates only losing 5-0 to Celtic.
You know I am getting to quite like Gary Liniker, imagine! On Match of the Day analysing Charlie Adams (Southampton) kick on the head of the Huddersfield goalkeeper he said:” what sort of player would kick another player on the head,” to Danny Murphy AND Alan Shearer. Cue Murphy grin, Shearer irritated look, so he says to them both, “ you wouldn’t do that would you, oh yes of course you did?” Cue Murphy, bigger grin, Shearer :, “ right move on “ ( more irritated).
Worth picking upon the IPlayer! Anyway on to Saturday and an epic struggle with Titanic FC, really looking forward to it, happy Christmas to all ETims posters and readers.

Merry Christmas to all at etims

Caption : Durty Murty on ice back for the festive period

Caption: Murty on ice becomes the first show since Ibrox was knocked down and became an ice rink.

Glasgow Council declare pavements and roads have been gritted..

“Feeling their pain”.
Loyalty without discernment is the harbinger of disaster.

Murty experiences the effects of the cold shoulder sooner than he expected.

Merry Christmas and Aw ra best from Texas to everybody here at Etims.

JESUS CHRIST IS THE LIGHT!

Caption
Another new sport invented by Sky for its subscribers

The Orcs still believe that an Arab or an Asian multi billionaire will ride in to buy their soiled hateful club, stupid stupid Huns

A merry and blessed Christmas to one and all.

Caption: Kenny Miller falls back to earth in winter

We’re walking in the air,
we’re floating in the Celtic sky,
the other teams well below us as we fly.

Supporters gaze with disbelief,
it cannot be a big surprise,
no teams below us believe the lies.

We’re surfing in the air,
while they all cry out “its not fair”,
we’re drifting high without a break,
leaving all the others in our wake….fuck sake!!

Well today has been a great success, my good lady was overjoyed with her new Ironing board.

Monti.. What time did A&E remove the aforementioned ironing board from yer arse…

Those are not lights for a Christmas tree
That’s dark long kesh son, you’ll grow to see,
That Christmas cheer does not mean thing,
In magilligan, Armagh or an H – block wing.

SOMETHING INSIDE SO STRONG!

FREEDOM’S FIGHT CAN BE WON, IF WE ALL STAND AS ONE!

Merry Christmas to all our Aussie posters,
lang may your lumb’s reek,
and your wallet creak. 😉

Ewan, hope your daughters all had a marvellous Christmas and your wallets feeling the strain.
Last Christmas I gave you my heart,
but the very next day,
you gave it away,
this Christmas i’m giving it to Brendan Rodgers.

Jimmybee… I hope you are well and had a good Xmas day. The temperature dropped like a stone yesterday here in Belfast but no snow.

It is a beautiful day in bonnie Dundee….so far, the sun is shining no sign of any snow, so the game should be fine.

So my team selection is….

Dundee news: Baltic with showers during the game.Broonie will wear his short sleeve top.Catholic Church disappointed that once again,no virgins or wise men to be found in the area……

Missus has been at me to get her a boob job/bigger nappers for Christmas for the past 3 years…
How surprised was she to ge up on Christmas to find a years supply of Andres under the tree?
Whit the fuqs this? a wanted bigger tits says she
Well It’s worked wonders oan yer arse I replied.