Never ever let it be said that Rangers fans dont have a sense of humour. Surely  we all remember them laughing along with Charles Green in his Orange Top wearing share-purchase tout,I mean tour?

Well we are glad to report that the infamous Gers sense of humour hasnt abated despite the turmoil and anguish which all Rangers fans are suffering right now.

Well done lads we say, its very honourable and none have kept their sense of humour more than the Rangers Report website who, with a bright blue tongue firmly wedged in their red and white cheeks, have uttered this classic comparison today in a piece covering the potential sale of the Rangers midfielder Nicky Law: (Please brace yourselves – Ed)

We will let that sink in.

formerly known as The Bald Iniesta!

We can only give an Armed Forces Day style salute to the Copland Road Comedy Genius who first came up with that doozy. Its fair brightened our day.

And just for the sake of balance, here is the Honours list of one of the All-Time Greatest Midfielders the World has ever had the joy to watch on a football pitch: 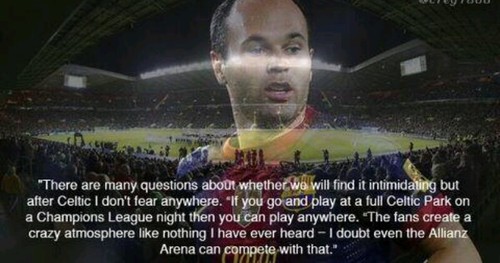 They really should now just go quietly into the night.

Humour,they don’t know the meaning of the word.
The Zombie Nation will bring their own style of Armageddon to Hampden.And anywhere in Scotland/
N Ireland,they will rear their ugly heads,on Feb
1’st,spoiling for a fight.

He is 16 years old and the world has gone mad!