Celtic managed a 1-1 draw with Dynamo Dresden in Germany yesterday, which,  sandwiched between the tense Second round Champions League tie with Reykjavik, was never going to get the pulses racing. The performance pleased manager Ronny Deila, though, which says more about his man management skills than the actual game;

“It was a very tough game with the heat and I’m proud of the boys as they worked hard for 90 minutes after I had trained them hard yesterday and then they had the long trip to Germany,” said the Norwegian. “The result was ok and now it’s all about getting energy into the game on Tuesday.

“The first 20 minutes were good, and I think we got the physical shape out of this. We had a lot of chances in the first half and again at the start of the game but we need those periods to be longer.

“Every player got 45 minutes in a nice stadium with a good atmosphere so it was worth it. But now it’s important to let the boys rest so we are full of energy and have no excuses going into the game on Tuesday.”

He would have been hoping to get through the game with no injuries to any of his charges, but this is Celtic, and someone had to cop one. This time it was the turn of Kris Commons, who had opened the scoring before most people had found their seat, and thats given us something else to worry about and its not even bloody August yet.

Ouch. My knee is just below the thigh, where it should be.  That sounds sore if its dropped.

“It can hurt but I don’t think it’s very big and I hope he’s ready for Tuesday.”

So he’s suffering from a little knee where his thigh used to be. Maybe we need to check with someone who would know a little better- Mrs Kris Commons.

My mans just walked in and he’s fine, a wee bit of TLC is all that’s needed! 🙂

Ah, he’s just got a dead leg. Makes you wonder which of the two deserves the title Mrs Kris Commons more.

Mind that time he cut himself shaving ? 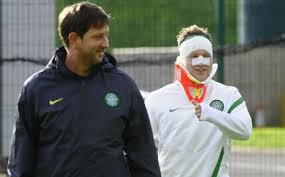 Craig Gordon, a signing which has split the Celtic support in a way Nir Bitton can only dream of, made his debut yesterday, and you have to say, based entirely on this game, we might have fallen on our feet with this guy.

He made more than one good save and looked more like his old self than any of us probably dared-or wanted -to hope.

Deila was full of praise for the stopper;

“I was very pleased with Craig. It was a fantastic performance and he was like a cat in the goals and everything seemed easy. I am happy for him after two years and three months since the last time he played.”

This comment, with the addition of the two years and three months line, hints that he may have needed a lot of convincing to add Gordon to his squad. I think he was stating here exactly what he had told those who recommended him a few weeks back, except he may have used it as a reason not to sign him.

Although its good to see we may have got ourselves a first class back up, it will also increase worries that the club will find it easier to sell Fraser Forster, even though no-one has expressed an interest yet, despite one or two furtive attempts to remind clubs he’s available by the Scottish Press. And Sky sports, to be fair.

One final word on yesterdays game, and it concerns the way the Daily Record reported the game, with David McCarthy the man who wrote this tasteless paragraph;

Comvalius’ goal would have brought some relief to the home fans and a city that woke up to the devastating news that a bus crash on the outskirts of Dresden had claimed the lives of nine people.

Yesterdays diary commented on the way that tragedies and serious international issues can be somewhat trivialised when mixed with the world of sportsmen, not the brightest sparks, and sports reporters, who are several shades dimmer.

Yet that comment said just as much about the sheltered world we all live in, and how we sometimes cannot possibly understand what others are forced to go through.

And there we will leave the political comment for now. As one or two stated in the replies, its not the right place. It was mentioned only because of the whirlwind swirling around the comments of Nir Bitton, and the potential witch hunt of a young lad, who probably didn’t understand the depth of feeling that the rest of the world has for the actions of his country, which he has probably never had a chance to look at objectively.

There may be a new arrival at Celtic this week. A Mexican winger .

Javier Aquino did play in the World Cup, but I can’t remember him. ( Neither will you. He got half an hour against the Dutch, oddly enough, that was roughly about when it started going pear shaped for the Mexicans. )

He is lined up-some reports in Spain say the deal is already done- for a season long loan at Celtic, because his club ( Villareal )don’t want to sell him, and they can’t play him either because of the Spanish league rules on non EU players. No-one has asked them why they bought him in the first place. His record actually makes you wonder why they bought him regardless of eligibilty.

There is interest from outside Spain and one club in particular is at a very advanced stage in the negotiations.

“But we have been assured this is just a loan and not a transfer and only for one season.”

The player appeared 33 times for Villareal last season-in Division Two, most of which were as substitute.

When the World Cup was over, the player seemed quite happy with his lot, and made his forecast for this season.

It was a wonderful experience to be part of such a great tournament, although we are disappointed to have been knocked out in the circumstances we did to Holland.

“Now I have to concentrate on getting back to playing for Villarreal and having a good season again.”

Of course, he wasn’t to know that playing for Villareal and having a good season would become mutually exclusive.

On the face of it, it looks like we have just found another reason to call in the fellow who scouts our forwards and ask him if he thinks scouting is the career for him.

Left back Emilio Izaguerre has given a rare interview to the press. He felt he had to come out and defend accusations that his country, honduras, were playing it a bit rough before and during the World Cup.

“Everyone has been talking about the Sturridge incident and the England game.

“But I said sorry many times to him because that is not the type of player I am. I don’t like to hit other players. It’s not my style of game, so that wasn’t nice.

“We shook hands at the end of that match with England.

“Then at the World Cup, the Honduras team were criticised for our physical style of play. But I think teams such as Argentina and Uruguay, all the Latin American teams, play this way.

“Honduras were penalised too much for the little things in Brazil. It was as if the referee was waiting to punish us, which was very unfair.

“In our first match against France, it was 0-0 when Wilson Palacios got a red card and that really damaged us.

“We then had a lead against Ecuador and lost – but I felt we were affected by
everything that was said about the team and the way the matches were refereed.

“Nothing went in our favour. I don’t want to use it as an excuse but the same things didn’t happen to other teams who played the exact same way.”

He enjoyed it nonetheless, and then confirmed we got our Izzy back…

“It was a special feeling to play for my
country in such a great tournament.

“But the World Cup is finished now, it’s in the past. I’m focused and looking forward to the new season with Celtic.

“I’m just hoping this campaign can be even better than the last one for the club.”

And he even mentioned that shot against England, when he was denied a rare goal by Fraser Forster;

“That’s why in the last 10 minutes I shot from the left wing – I think it was about 40 yards out – to try to get a goal against Fraser.

“I really wanted to score a goal against him because he is always annoying me.”

And despite offers to appear in the new “Expendables ” action film, he reassured Celtic fans;

“I’m very happy at Celtic. I’m grateful to the team, staff and fans for everything they have done for me. I have a long contract and I’m not planning on going anywhere.

Elsewhere, we haven’t mentioned the troubles of Scotlands newest club, Second Rangers for a while. They are currently touring the United States while there’s still some season book money left, and yesterday were one of the attractions at the California State Fair, where they beat local side Sacramento Republic 2-1. That particular match programme will no doubt be a favourite amongst fans…

We couldn’t help but notice the official tweet from the club….

Things you don’t normally see at a football stadium: a monorail.#GersOnTour vine.co/v/MQVPLKZelUb

Well, I’m sure someone mentioned it to them before. Ally Les Verts over on KDS took time out to remind them who; Ian Andrews was the keeper in Saturdays Diary, evoking memories of his “Five Past Andrews ” punchline that he gifted to supporters of the old Rangers.

The all conquering Celtic side of the sixties won everything they entered. Including this lesser known trophy, tweeted by Celtic Collectibles on the social media site. 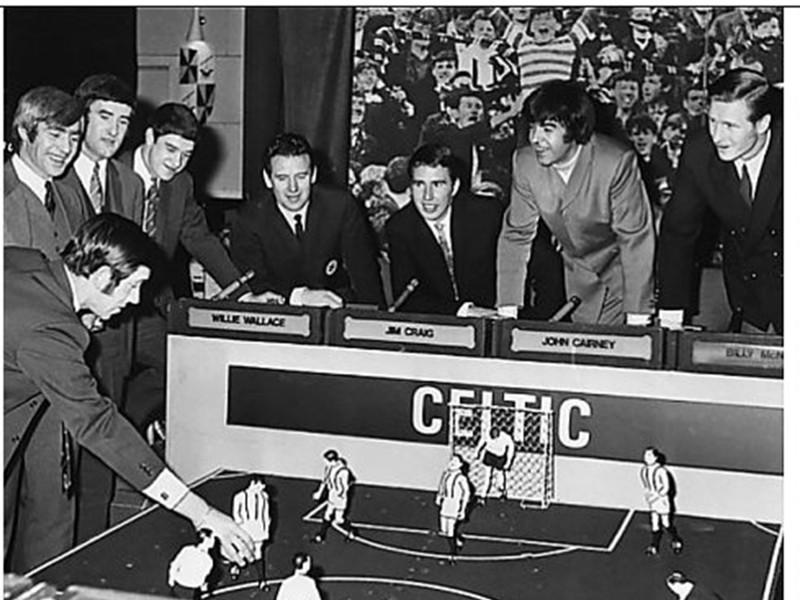 On quizball, “what is the correct name for the dog star?” wille wallace…….”pluto”. Priceless 🙂

Re- Aquino,
Villareal finished 6th in La Liga last season. It was the previous season that they were in 2nd div.

I misread the Scotsman article. Apologies. Eye being poked out even as I speak.

No probs Ralph Malph.
33 apps in 6th placed La Liga side ;
maybe he can play after all. Let’s hope so.

Just to say R.I.P. Bob Torrance, a golfing legend and father of a fine man Sam. Condolences to all family and friends.

quizball indeed. I believe the expression “route 1” for hoofing the ball into the box came from this show – somethng to do with the choice of question difficulty offered to the team

I have seen quite bit of Aquino and heis as good as what we have middle/attack.Intelligent, good user of ball, would do more than a job.

Is That Jim Baxter and John Gregg on the side lines?
HH