Celtic moved a step closer to the league championship after a convincing three goal victory over St Mirren today at Celtic Park. Strangely enough the Saints started well and had large passages of play controlling the game in midfield and passing the ball around really well as a sluggish Celtic took time to get into the game.

But settle they did and it wasn’t long before they started zipping the ball around quickly with some neat interplay causing the visitors many problems. A beautiful Griffiths ball across the face of goal saw Commons lunge in but he could only deflect back across the six yard box. Stokes competed well with the defender and keeper before playing a beautiful pass to Henderson who looked set to score his first competitive goal but only a brilliant block by a Saints defender denied the 17 year old.

With Saints playing a dangerous high line it was providing Celtic with many avenues to exploit. With Saints pushing out Commons played the ball to Griffiths. The striker took it round the keeper and steadied himself but his effort but was expertly headed away by a defender when the better option would have been a simple inside pass to Commons or Stokes for the easiest of finishes.

The high line was causing Saints defensive issues but they were ably assisted by a dire North Stand assistant who couldn’t wait to put his flag up when on many occasions players clearly looked onside, with one of those decisions denying Griffiths a goal from a terrific Stokes pass.

Celtic were finally rewarded on the stroke of half time after a well worked goal. Commons and Stokes linked to feed Griffiths who put over an accurate cross for the onrushing Johansen to powerfully header his debut goal in Celtic colours into the net.

Saints came to Celtic Park to play football and looked dangerous at times. Kenny MacLean in particular showing terrific skill on the left with his crosses not being attacked well enough by his team-mates.

Celtic going forward looked dangerous all game with Stokes at the centre of most things. The arrival of Griffiths has Stokes revert to the level of play he showed when linking with Hooper. The Irishman’s natural position is playing off a Number 9 and you can the major improvement in his game as his link up play with Commons and Griffiths has been terrific at times.

It was from Stokes selfless play that saw Celtic double their lead. Impressive play by Johansen and Commons saw the ball arrive at Stokes feet. With the strike on goal available on the edge of the area he instead played a simple pass to Griffiths whose right foot effort beat Saints keeper Kello. 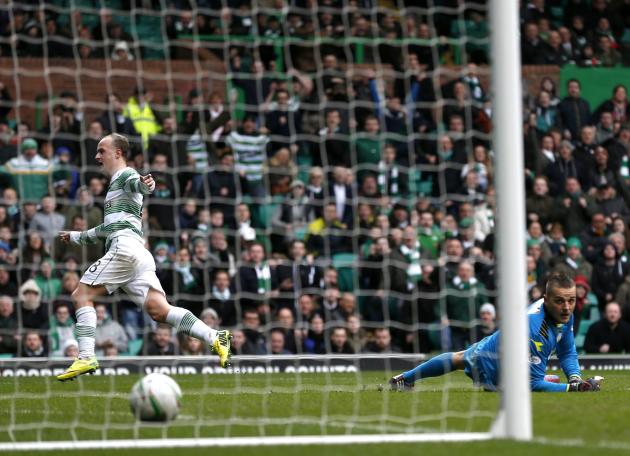 Not long after a terrific one-two between Commons and Van Dijk saw the midfielders effort rattle off the inside of the post.

Pukki (on as a sub) then had two great chances to score. First that man Stokes released him and he should have at least hit the target but instead hit his effort wide and then with a free header he once more put a weak attempt wide. There’s a player there but he just looks bereft of confidence unfortunately.

The third and final goal deservedly fell to Anthony Stokes. A good passing move on the break saw the ball land at his feet and he smashed it into the net.

Special mention to the match officials who were dreadful once again with their decision making. If they can’t get basic offsides or basic fouls in the penalty box correct they shouldn’t be at this level.

So Celtic move s step closer to being crowned Scottish champions, quite possibly next week. Get your tickets and party hats on for a three-in-a-row party!

ETims POTM: Special mention for Johansen who as excellent but Stokes was a level above everyone else today. He was at the centre of most of our good play and was rewarded with a fine goal as the final whistle approached.

I thought Griffiths was twice the player of Stokes today. Stokesy could copy some of this guys appetite for work!!

The match officials were shocking.

The closer we get to the title, the more I cannot stop smiling when you hear the commentators trying their best to avoid mentioning 3 in a row!!

Hail Hail The Celts are here…..

Your comment is correct, the media are bluenoses.HAIL HAIL,it’s a grand old team to play for..

If I have said it once I have said it a Hundred times Anthony Stokes is the perfect SUPPORT player for any mains striker. Hoopers goal average was greatly supported by Stokes in their time together as a pairing and I can see the likes of Griffiths benefiting too. Don’t get me wrong he can be handy in the box too but his real strength lies in his ability to turn defenders inside out and lay on a terrific pass into a great space. Pukki is a very similar type of player in my eyes but for me nowhere near… Read more »