Whilst we were all at home watching Eastenders kill off any remaining festive spirit, Celtics players were fully focussed on todays trip to Perth.

Neil Lennon spoke on the official website to give us all a feeling of what its really like for professional footballers;

“You get used playing around Christmas time,” he said. “You have Christmas Day at home and then you´re away, and it´s the same for the players this year. They trained on Christmas Day and then travelled to Perth.”

He warned us not to expect an easy game against St. Johnstone, and reminded us of their home form;

“St Johnstone at home can beat anyone, they are a very good side and have been very consistent in the last couple of years,” he said. “If you look at the resilience they have, they were away to Hibs and down to 10 men for a long period, and didn’t get beat, so they are a very tough nut to crack. ”

Lennon  also tok the opportunity to praise James Forrest, who came off the bench to score against Hearts last weekend, which means that he will probably play today;

“It gives everyone a huge lift to see him fit and healthy,” he said. “He gets people off their seats, with not just his goals but his all-round play on Saturday was brilliant and I really enjoyed watching him.”

He’s right, after he came on on Saturday, it wasn’t long before people got off their seats and went home.

Forrest is blowing hot and cold, and thats what wingers do. Because their game involves a lot more risk taking than most players, a lot of the time it won’t come off, and the internet and television age means that they are  subject to more scrutiny than other players.

Still, it seems Lennon has faith in him, and we’ll just have to hope he performs. Adam Matthews and Tom Rogic are back in contention for this one. Rogic had been previously promised a run in the team by Lennon as he wants to play for Australia in Brazil next year, so who knows, he might be looking forward to a Boxing Day game in Perth.

Until someone pulls him to one side and tells him which Perth it is. Rogic needs a wee bit of cheering up after he was voted out on Australias Strictly Come Dancing last week; 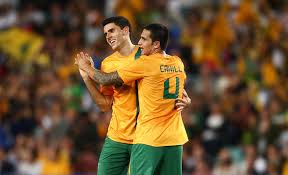 The big controversy over flags and banners at the game was put to bed finally when Police Scotland, St. Johnstone and Celtic all agreed that you can take your flags into the ground.

I wouldn’t be too optimistic about your chances of taking them home with you afterwards, especially if they have something that could be deemed controversial or  provocative on them, such as the name of your CSC, or “Happy Christmas ”

Manager Lennon gave us his thoughts;

“It would be nice to see some colour, so long as there is none of the sinister stuff like pyrotechnics or flares.

“We want it to be an occasion and an atmosphere.

“The colour and the flags add to that atmosphere.

“But I’m not keen on flares or anything that can be harmful to people on the pitch and off it.”

He wants it to be an occasion and an atmosphere. He knows its Perth we’re going to, right ?

Well, Perth that you are going to. I’m going to watch it on the telly, like real fans do. The wife has decided that its too expensive this time of year for the jaunt north, and thats fair enough.

Like she said as we sat opening the presents under the tree yesterday, “we really need to get a house soon. ”

The club is putting on a free bus service for those attending next Thursdays big Glasgow derby, its also giving out free tickets for the game, and still some people moan about the tight fistedness of the board :

CELTIC are delighted to announce that the club will be providing a free bus service for supporters to make the journey to Celtic Park on New Year´s Day for the Glasgow Derby against Partick Thistle.

Around the greater Glasgow area, several buses have been hired by the club, departing at 1:15pm from the following points:

Supporters accessing this special bus service will be able to use the same buses to return home to the same pick=up points after the match against Partick Thistle.

Each Bus, operated by First Group, will follow a single route to Celtic Park. However, the bus should be available exclusively to fans travelling to the match only.

This service is available to fans from both Celtic and Partick Thistle with no charge for transport to and from the game. Details of the service can be found noted below:

– All 1:15pm services will drop off in Gallowgate at Coalhill / Society Street pre-match, after which they will make their way to Buchanan Street Bus Depot.

– A shuttle service will then be available for any fans travelling from Buchanan Street Bus Depot to Celtic Park up until 3pm.

– Post-match buses will pick up from Gallowgate at Holywell St from the First Bus Stance.

– Buses for return journeys will depart at 5:20pm and will return to the original pick-up point. Buses will be signed to indicate their drop-off point.

– In the event that there is spare capacity on the bus for return journeys, this can be utilised by supporters who did not utilise the buses for their trip to Celtic Park.

– An Inspector will be on duty to support the buses and help ensure supporters are on the correct bus for their return journey.

– All free bus services provided by the club for supporters are on a first come, first served basis.

Congratulations to all who thought of this and..hang on, what time is it picking up from Stoke ?

Miserable bastards. All those who live in walking distance of the ground, who have got a full day off work to get there, they get a free bus to go with their free tickets.  Us who traverse the highways and byways of the country are left to fend for ourselves.

So thats how they divide the support …

Meanwhile, Celtic have made a move on Egyptian attacking midfielder Mahmoud Hassan, a nineteen yearold from Al Ahly. He’s already used to playing in front of arenas with crowds like Celtic Park;

Recently, he made the headines in his home country when  he managed a credible second place in the Round Egypt Leaning on One Leg Competition.

But its more about who’s leaving than who is coming in at this stage.

The Express has this;

Celtic keeper Fraser Forster is not on the move

Nothing to do with defending high balls, more a statement of intent to keep the big lug at Celtic for the rest of the season.

Neil Lennon told us where we are up to;

“Looking at how the situation is, we have no offers for him and there is no apparent interest in him.

“I am sure there will be further on down the line, but I am pretty confident we will have him for the remainder of the season.

“He is quite happy here, for the time being anyway. Inevitably, it will be difficult to stop his progress as it is with most players now. But in the short-term future he will be here.

“In the summer we sat him down and I spoke to him myself. He had a good chat with Peter Lawwell and that sort of reassured him on all aspects.”

He had a chat with Peter Lawwell. Why ? Surely the manager manages the players, not the chief executive ?

Then , a very insightful and thought provoking line or two from the gaffer;

“Fraser has been a real success story in my time as manager. One of the best things I have achieved is getting a player into the England squad in such a specialised position.

“We just want him to concentrate on his club football here.

“Hopefully he will be on that plane to Brazil. I’m pretty confident he will be.

“I don’t think being at Celtic has hindered him – far from it. It’s been the exact opposite. It’s done wonders for his career.”

That last bit is spot on. Celtic has been good for Forsters career, and it does beg the question, why would he be in a hurry to move on ?

Ah, we’re back to Lawwell again. Still , the Record are doing their get him out of here;

” England boss Roy Hodgson is understood to feel that six months of only Scottish football will not be enough to force Forster into his squad.”

It doesn’t  say who its understood by, but you get the drift.

Meanwhile , Georgios Samaras has said he won’t be downing tools for Celtic, as he feels he owes the club too much. Though his thoughts on a move show that the big Greek is somewhat detached from reality;

“I would like to play in a more competitive league but it would need to be a club where they want to be winners.

“There’s no way I’d sign for a team whose objective is to finish 10th. I want to be at a team who are the best in their league.”

Somebody tell him Barcelona were only kidding…

Finally, back to todays game, and some advice from the Dundee Courier, as Police Scotland warn that bad behaviour will not be tolerated;

“Further discussion has taken place between all parties and a request from the clubs made to Police Scotland that the ban be lifted has been accepted.

“The two clubs are now putting their faith in all supporters that they shall support their respective teams in a manner which befits what should be a great game.”

The club also warned spectators that offensive banners or inappropriate behaviour will not be tolerated and that a “rigorous” search policy will be in place. ”

And we all know how friendly Tayside Police can be;

Remember what happened to that guy who crossed the road before the green man was showing ?

Boxing Day quiz time, and it’ll give you something to think about..

There is a connection with todays opponents, but whats being celebrated here ?

Rogic. Is he a figment of my imagination?

He may as well be Doc.
I would slot him in behind a front 2 of Stokes and Commons and see how that works?
I can see him disappearing out the door in Jan on loan to get some game time in for Brazil.

I would if I was him.

Was my first ever cup final.League Cup 1969, 3 days before my 8th birthday 1-0 v St Johnstone. Auld scored the only goal 🙂

Ah them were the days………all cuing up for a wash in the Team Sink as the Suitcases headed across the Sea bulging with £ notes…….

If you read the full Samaras interview you will see that he rubbishes that Barcelona story and explains how it ended up in the media. Which provides quite an insight into how the media works.

Maybe if games weren’t scheduled for days when there is no public transport then we wouldn’t need free buses laid on.

I had a much longer version but I think Santa forgot to drop it off. Another good read and no sign of Christmas exhaustion just symptoms of too much drink! I hope your wife does not take today too literally. Two black eyes and a bloody nose would not be good preparation for next year’s diaries.

I just listened to the game on CTV but have no idea if it was good, bad or indifferent. I guess a win is a win or is it?

I think I recall having similar feelings the day of the League Cup 1-0 – jist! But then, I also think I can remember many a game like today’s. You know the type, will they won’t they?