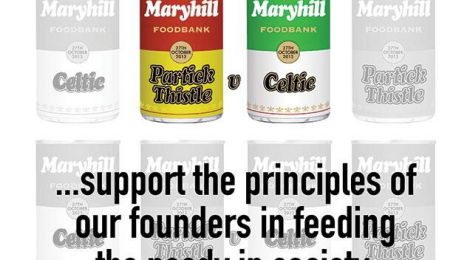 Yesterday 121 soup supplies were given at the kitchen in Maryhill, a trifle less than on the previous day. There was also a fairly large number of orders for provisions and coal granted. Although not as keen as in other districts of the city, there is obviously at Maryhill a considerable amount of genuine distress. Five men who were lodges in the muster room were supplied with bread and hot tea before being sent out in the morning.

Superintendent Beddie acknowledges the receipt of the following donations:-

In addition to Maryhill, there were also updates from the work of the Soup Kitchens in Northern, St Rollox, Central District, Eastern and Southern. Also Hillhead, Govanhill and Polmadie, Kinning Park, Govan, Partick, Paisley, Airdie, Coatbridge, Greenock and Renfrew.

It further noted that an increase in temperatures had temporarily relieved the suffering caused by fuel poverty another cause of real hardship over a century later.

Also
one congregation alone in the centre of the city has taken charge of between 80 and 100 poor families and their work of rescue has assisted materially in lessening the call made on the public fund.

October 16th 2013. A day designated as World Food Day.
And once again the people of Maryhill are in need,

On Westendreport.com an article on the newly established Greater Maryhill Food Bank quotes one of its volunteers, Sheila Ramsay.

“Its not just people who dont have jobs who use the food bank, its also people with jobs on low incomes. Were seeing 20 different families each week. Its a growing need and were responding to that. If this service wasnt needed then that would be lovely. But thats not the case.” 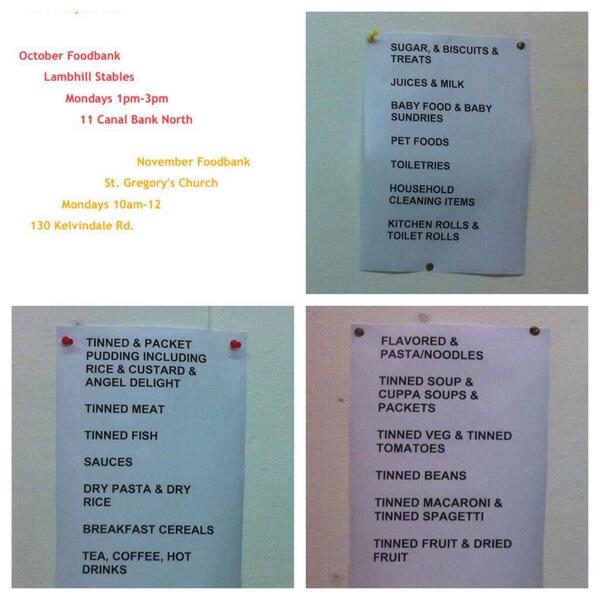 118 years on and the people of Maryhill are once again helping those in their community in greatest need. On a small scale, locally and largely unreported.
They are there in spite of the sneering of government ministers that food bank users just need to budget properly

Perhaps some of the items donated have changed over 118 years. For Ox heads and a Quarter of a Sheep read Dry pasta and Dry rice. Sadly whatever the item, it would seem the need is very much there again for a growing section of our communities.

That it should have come to this again is something for debate elsewhere however the outrage felt at the need for Food Banks in 21st Century Britain is very real. Many of us grew up in challenging social and economic times in a Scotland scarred by unemployment. We had needs and we went without so-called luxuries more times than wed admit but how often were we actually hungry?

That there are people in our society today in need of food donations is truly depressing. However as in Victorian Britain there are those whose priorities are first and foremost to attempt feed their fellow citizens. Such as Greater Maryhill Food Bank.

This is where we come in. We know our history. We know that 125 years ago Celtic Football Club was founded with these words,

The main objective of the club is to supply the East End conferences of the St. Vincent De Paul Society with funds for the maintenance of the “Dinner Tables” of our needy children.

As we approach the conclusion of our 125th anniversary we have one simple request.

Help to feed your fellow citizens as the founders of the club did 125 years ago.

From 10.00 am on Firhill road at both sides of Firhill Stadium volunteers will be taking your donations. They will have the usual buckets for cash donations but they will also have vans parked ready and very willing to take your food donations.

We would appeal to Celtic supporters to support the work of Maryhill Food Bank by bringing donations of any of the items listed above.

Bringing a few cans to the game will take on a whole new meaning when the cans are full of beans, fish and rice pudding!

This year has seen spectacular levels of support for the charitable aims of Celtic. Huge sums of money have been raised to the credit of the club and the support.

This appeal wont change the world. Louis Tomlinson wont be on Maryhill Road and we may have no press coverage.

You can guarantee one thing though.

Just as it did 125 years ago, it will make a difference. 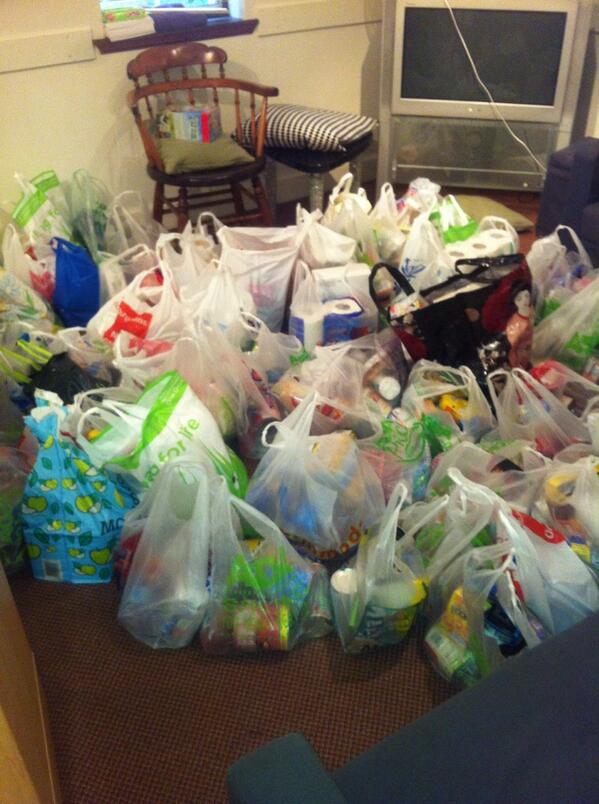 * Article courtesy of @Celticresearch and main image from @Cartuja

I cannot believe in this day and age we have got people using foodbanks, well thanks must go too our Draconian government full of millionaires who are getting richer while the poor die in need of a crust of bread.
ABSOLUTELY SHOCKING!!!!!

Guys thanks for showing this. Excellent thing to support and subject matter close to our hearts. I’ve just emailed it to 3 people im working with on Monday asking if they fancy an early start to make time for a Costco then maryhill trip. They’re in! Thank you

Its a national disgrace that foodbanks-the modern name for a soup kitchen-are around again. Budget properly ? How can someone budget if the amount coming in is less than the amount going out ?

Celtic FC, a club founded on the principle of helping the poor , need to do their bit a well.

And in the same week as British Gas decides to hike energy prices. These are the stark choices for some; Be cold and starve!

Unbelievable but oh so true and I see this first hand evry day in the job I do. Do politicians give a shit? I don’t believe the majority of the careerist fuckwits do give a toss. And they are promoting austerity at this point whilst wanting to give themselves payrises? Some necromancer out there please resurrect Guy Fawkes now!

So welcome to the UK, a developing country hoping to maybe in decades to come be regarded as a 1st world nation!