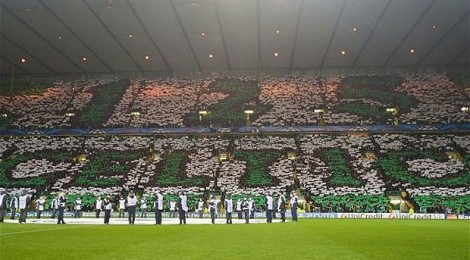 The Evening Times John McGill waxed lyrical tonight with an article emblazoned ‘500,000 reasons for Rangers to be Cheerful’. Nothing wrong with that I hear you cry. They’ve received an offer of £500k for their entire first team and Charlie is doing cartwheels along Paisley Road West on his way back to Yorkshire. For those unaware Charlie’s a Yorkshireman.

The squad value of £500k is as you all know way overpriced so instead John McGill focuses on every Sevco fans favourite topic this season. Yes, you’ve guessed it, attendances. The article advises their next home game will see Sevco “smash through the half-million barrier in home league attendances”. Again, other than an unhealthy obsession with attendances, no real worry as far as Celtic is concerned. Well, not quite. You see whenever an official or unofficial Sevco publication generates an article on attendances they somehow manage to bring Celtic into the discussion, normally to try and put one over their illustrious Scottish Champion and Champions League last 16 big time city neighbours. Normally, other than for comedy value we wouldn’t take much notice of a newly formed third division team but once our clubs name is brought into the equation to justify some half-baked pro-Sevco article it’s only fair we provide additional facts for completeness so here we go.

Celtic “smashed through” the 500k barrier months ago when you include all home fixtures. In fact we haven’t just “smashed through” the barrier, we’ve continued on our merry way and smashed / broke / demolished several more as so far 785,000 fans have been to Celtic Park this season – Yes, we are closer to the 1m mark than 500k!

Sevco on the other hand have had a total of 663,000 through their gates.

Over 120,000 fewer fans than Celtic having played one game less.

If you remove domestic cup games from both clubs overall numbers – early round matches very few people are interested in for many obvious reasons – then this makes a rather significant difference. Celtic’s average jumps to 49,420. Almost 3,000 more home fans per game than Sevco. After the Hearts & Juve games in the next few weeks Celtic’s average will be over 50,000 per home game excluding minor cup matches.

We will also “smash through the 500,000 league attendance” barrier ahead of Sevco (don’t let this get in the way of a Sevco good news story though) this weekend when only 35,000 fans is required to do this. As it’s against Hearts and is our first game in a couple of weeks it wouldn’t surprise me if we get around the 50,000 mark.

And then for overall completeness it would only be fair to include cost of ticket prices. With Celtic playing in the top league average season ticket prices are in the £550 range. Factor in significant costs for the Champions League adventure and you are talking serious outlay.

Sevco’s travels playing against fishermen, plumbers, joiners and men with full-time jobs outwith football sees a significant reduction in their season ticket cost. £200 will get you one of those or with a sleight of hand and dapper negotiation skills a groupon voucher may just close the deal.

Fck the Evening Times and fck the Scots’ MSM, let them peddle their pish, it’s only the degenerate eejit knuckledraggers who buy into the bollox anyhoo.

I saw one argument on the forum of said newspaper reports mentioning overheads and profit margins. It would be interesting to find out just how much Sevco are making. Their wages to income ratio, etc, compared to Celtics… I’m sure it would make for interesting reading. I did have a giggle to myself when I read the article and it smells of Traynor leading Green’s PR maching giving out the feel-good effect to fans who, lets face it, can’t be THAT far away from losing interest in watching what they’re watching week in, week out. Green knows, Traynor knows it,… Read more »

On the subject of overheads and profit margins, you’ve got to wonder if they’re paying anyone again. If you take it as read that Green and his circle of spivs don’t have to produce books until the 31st of December 2013. Then someone in a position of responsibility really should be asking more discerning questions, you would think!

You’ve done it again, guys. Here was me thinking I was congratulating Hector on a well researched and enlightening article, only to find it has not been posted – AGAIN. I know I have a lot to say but I can’t sleep till it is off my chest and I am not turning to pills as an alternative. Well done, Hector. I pay not the slightest attention to these sham word-smiths. If I could, I would stick a fork in their lying tongues. For impartiality, put your trust in the bampots. They are more reliable and will soon be the… Read more »

Great job at uncovering the facts. Personally I ignore anything I see on the new third division outfit. They really don’t atract my radar. But the fiction you highlighted is still nice. I am impressed though at a new club who can find all these fans whoare willing to pay a tenner a week to watch the new founded club. I can only imagine there were a load of ex fans from that old extinct club who used to be called rangers who ad nothing else to do so there were some people at a loose end with a tenner… Read more »

Good news for them an bad news for us make the msm money. The fact so many good Tims keep writing about the newly formed 3rd div club keeps up ‘the myth’ they are our rivals. rangers are deid, Huns and Hunishness behaviour is still thriving, and is something that will always be here after 400 year of them breeding in the same gene pool. HH

To use an analogy stolen from KDS, this is the equivalent of Primark phoning up Harrods and saying “we’re rammed, get it up ye!”

Sevco supporters must dread every Saturday coming around when they have to kid each other on that they are making a stand for their new club. To have to pay to watch such utter drivel week in and week out must grind on their nerves.

Moreover, the quality of the supporter that flagellates themselves for such a meaningless and pathetic cause every week melt like snow of a dyke when the jingoism dries up and no one pays them any attention. What’s their name again?

Am I missing something or does all this hstuff (whether skewed, lies and truthful) about such high attendances at a Scottish bottom tier game not merely HIGHLIGHT the incredible mess THEY created (ie the huns NOT the SFA, the SPL, the clubs, HMRC, Peter Lawell, the RC church, or in fact anyone else but themselves)?

Funny how unofficial articles like this are allowed to be published

Hi we all know we are a bigger support the Scottish media pander to SEVCO to sell papers don’t listen too any of the knuckle dragers they are cheats and liars look at what their greed did too our game .i am sure one day they will work it out till then let’s Celtic keep up the good work . Hail Hail

I am glad somebody has put all these facts together. Good job.

Both have played 10 home games this season.

If that keeps them happy who cares?

I suppose that you have to have something tom shout about when you are watching 3 Division dross every week!