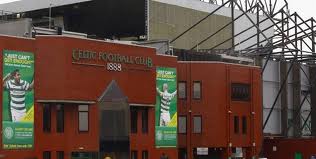 Every single Preier league game this weekend kicks off at 3pm on Saturday-like it used to in the olden days, before Craig burley had an opinion. Crowds will probably be down as the fat person with the beard takes prominence due to the time of year. Still, I married her, so I’ve got to grin and bear it.

Thankfully, she doesn’t read this diary. But if by chance she does, I’ll be looking for a typist tomorrow, and some straws to eat my food with.

Celtic host St. Mirren tomorrow, and since both Lennons have been in charge, the Paisley side have failed to score against Celtic, especially now Cha du Ri is away. These things don’t last forever, and hopefully neither will Celtics less than inspiring home league form. Manager Lennon says that smaller crowds, due to the economic climate have had an effect, but really its the age old question-do the crowd inspire the players, or is it up to the players to inspire the crowd.

Well, the players don’t pay to watch us, do they?

Lennon wants Celtic Park to return to its “fortress” reputation, and I suppose tomorrow is as good a time as any to start.

“We have achieved something very special (the last 16) and now we can concentrate on SPL duties. Everyone thinks it is pretty mundane compared to the Champions League but I wouldn’t say mundane.I think it is our priority and it is important to play like the champions we are, consistently in the league. You can look for all sorts of reasons and excuses for the home form but its something we must remedy and we want to remedy. Our away form has been fantastic but sometimes the atmosphere at home has been a wee bit flatter, especially after European games.”

Well, tell the stewards and police to stop harassing people and it might improve.

Up until Kilmarnock beat us, we hadn’t lost at home for over a year so I want that back as quickly as possible.”

Three points, a bit of pre Christmas cheer and a bigger gap at the top, please.

Lennon, perhaps pre-empting the usual transfer window press campaign to unsettle or sell as many Celts as possible has said that ~Celtic don’t need to sell, although”every player has his price” and he will definitely not do business on the last day of the window.

We’ll see. But the attitude is spot on. Keep this team together as long as we can. And only sell for EPL prices, and stop being a bargain shopping place for mid table English strugglers.

Elsewhere, the Celtic View, the glossy insightful magazine that allows readers access to news and views from Celtic Park, has been living up to is old nickname of Pravda again. It got that nickname under the old board when some of its articles were so obviously biased (kids-think James Traynor talking in the Record about Rangers) that comparisons with the old Soviet Union newspaper of that name were drawn. The people in power simply printed what they wanted the masses to hear, however ludicrously wrong it was, and the Soviet paper did the same.

Anyway, Stephen O’Donnell, author of Paradise Road, and winner of the most blatant plugs for a book on Etims competition, was due to be interviewed by Paul Cuddihy, who edits the View, about his fictional account of growing up in glasgow, and following his favourite football team. The gritty book has earned  great reviews, but the View decided against it, as it has “too adult a theme for its readers. ”  Stephen was dismayed that the interview was pulled, and even more surprised to learn that his book will not now be stocked in the Celtic shop. We can “Let the People Sing”, but want to make sure that we check what they read? Thats not the Celtic Way.

Surely it can’t be because in the book a character refers to the View as “pravda”? If so, its a little churlish, and makes one wonder if its the staff who are , in fact, the delicate souls who need not to be offended. The readers usually can make up their own minds. In fact, I’m going to send a strongly worded picture of my dog in a Celtic hat to complain.

Elsewhere, as the pantomime season gets into full swing, Charles Green is determined that his own show will be a roaring success-despite closing on December 17.

Called” the share issue”, he reckons it will make more money than the equivalent show staged in 1994 by former rivals Celtic, and has begged-well, not quite, not yet anyway, supporters of the dead club to pledge as much money as possible.

Oh, and he wants the SPL and its clubs to apologise to him. Because they are all innocent, and a big boy did it and ran away.

The yorkshire tarrier-if that doesn’t upset him, nothing will, – has moved into overdrive to publicise this feast of festive fun, and don’t be surprised if he extends the show by a couple of weeks….

Yesterdays diary had a picture clue at the beginning, an anagram to help, and a hint at the previous days quiz to help solve the teaser.

Thats right, it was Brian Whittaker.

Of course, it was ronnie Glavin, an early pressie for Run, Sammy run, who had waited for this day.

Today, while researching a few facts and dates for my own short story effort, I noticed that he actually played in the first game I went to-for Partick in 1971. If its the same Glavin , that is. The report didn’t give first names. Celtic won that game 3-1 , and Glavin gave Connelly and McNeill a hard time.

Small world and all that.

Which other ex Partick and Celtic player said that Rangers fans used to say to him;

“Aye you, you scored that goal against us at Ibrox.”

Merry Christmas to you all

Joe Craig for his wonder strike from the edge of the box in 76/77.

Hahaha, funniest opening paragraph yet and great diary overall. Well done indeed.
Prob won’t get the chacne to log in much over the next week so Happy Yuletide when it comes folks, after the 21st, the days start getting lighter! (unless you are a Mayan of course).

If I said that about my wife, I’d not be concerned with my fingers getting broke, but rather my peter getting the chop …

Ralph, by the sounds of things we are sharing the same wife. How uncanny is that?

I am back. I posted earlier but my comments have not appeared. I will just say that I agree with blinkabhoy and ask if you received my email with the attachment? I sent it a few days ago and hoped you would post it as a thank you to those that expressed concern at my absence. Look forward to hearing from you.