You have to give credit where credit is due.

The Westminster government has managed to get the old Dunkirk spirit back into the country’s psyche, with thousands of lives lost and tons of equipment abandoned and beyond use.

The latest wheeze from the spin doctirs at number Ten is to ask footballers to take a pay cut, as they are all very rich and can afford it.

There’s no mention of the people who pay the footballers, the wealthy, being asked to do the same thing.

In fact, the billionaires are asking for bailouts, because a couple of weeks of lockdown has left them a bit short, and they’ve had to lay people off.

Not as short as me or you, i hasten to add.

I’m at the stage now when I open the back door the birdies throw bread to me.

For the seriously wealthy, which includes most of the Government and their donors, this tactic is a much needed deflection.

What contributes more to the government, the NHS/police…etc….. A PL player taking a pay cut that stays with the clubs owners or paying more than 45% tax through PAYE on a large salary which goes directly to the government?..

How about the government asks certain people who own airlines and are worth billions to start paying tax, or the sportspeople who are tax exiles. Now what about bankers? The majority of players I know give a lot of money to charities and help communities…

Sit back and take a look at exactly how much is contributed to the government and economy through their wages and taxes. Everyone has an opinion on what they should earn but don’t forget what they contribute.
I’ll take his word for it that they pay full tax, as given our experiences in Scotland there are several refreshing outlooks on fiscal duty, but there is little doubt that footballers do contribute , on the whole, vast sums to the Treasury.
They are role models, and people do look to them to set examples in behaviour , and having a high public profile means that they will come under scrutiny…Walters in his tweets above is almost pleading poverty, but his take home pay in twelve months would, for a guy like me or you, mean we’d never have to work again, and whilst it’s understandable he has a distorted view of money and it’s availablity, there is little doubt he will gain much sympathy for his plight.
However, there are several club owners paying several players that sort of money on a weekly basis, and it is they who should be asked to explain their wealth and contribute more to the public purse.
If it wasn’t for public education, health and transport, they would have no one working for them, as they wouldn;t be clever enough, healthy enough or within walking disatnace of their businesses.

However, as most of the seriously wealthy contribute what money they have registered in this country to the Conservative Party, the government are unlikely to bite the hands that feed them.

All it would take is a simple proposal to link bailouts to tax paid in this country to turn attention to the parasites at the top, although that won’t happen.

Instead, pressure is on players …. 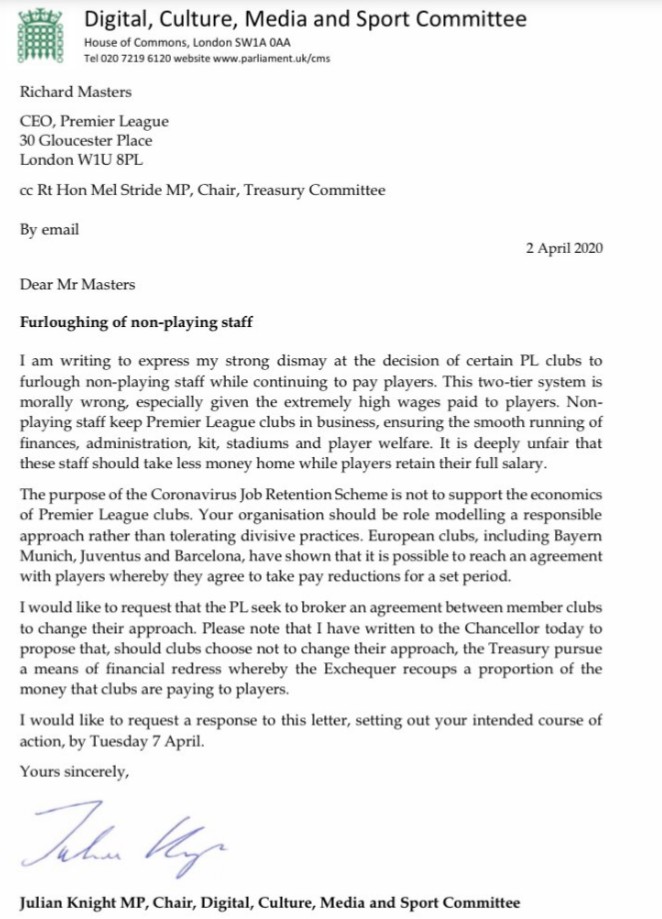 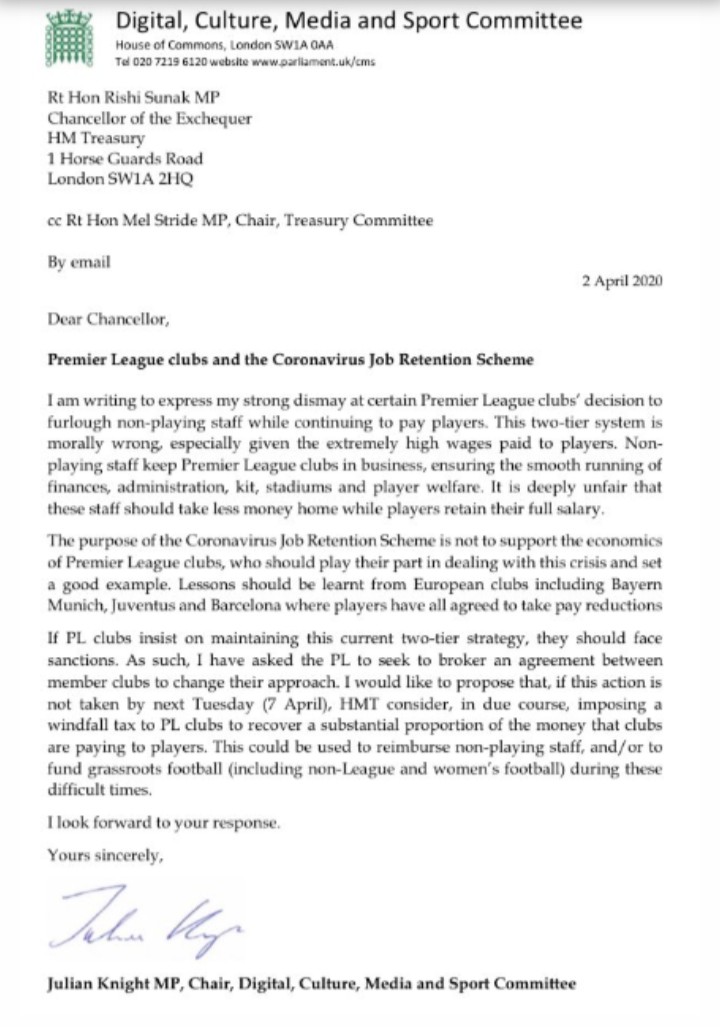 There is no equivalent letter to billionaire Richard Branson, asking him to consider actually paying his staff, although it should be the reply to his bailout request.

Meanwhile, over in Belgium, Bruges have been declared champions with eleven games to go.

No fuss, no debate, it’s done and thats that.

What we need is someone who understands how things work over there to see if that should affect a decision in Scotland, someone preferably with a working knowledge of legal matters…

Former Celt Mikael Lustig, who used to control the defence when he was in the team has been missed this season, but he made a valuable contribution to nine in a row when he said;

“It is not any surprise that I think Celtic deserve to win the league and be named champions.

“I know Celtic would prefer to play the rest of the games and to win the trophy after that but that doesn’t look like it is going to be possible.

“As things stand, Celtic is 13 points clear and they deserve to win the league.

“There are going to be other teams who want the season to be null and void but Celtic are well ahead and deserve to win.

One of their fans was furious… 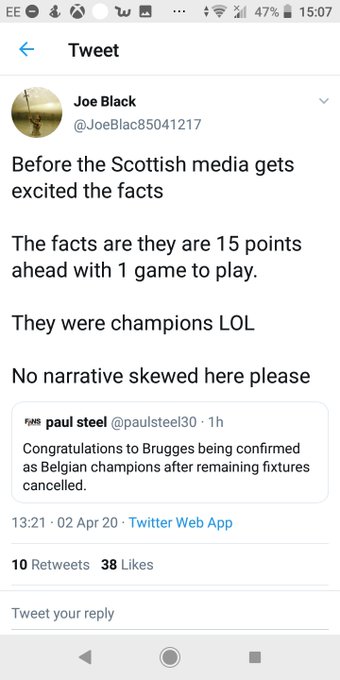 Er, that was quite a loose interpretation of the word “facts “…here’s a better one…

Moravcik67
@Moravcik67_
Quick point on the news that Belgium will crown Club Brugge as champion. They’re 15pts clear after 29 games. However, the Belgian league splits after 30 games – top 6 have points halved before playing another 10 games. It’s effectively a 7pt lead with 11 games to go.

The media will maintain the line that mathematically Celtic have not won the league, claiming the new club/company still have a chance, which is odd, because this time last year one Ibrox cheerleader conceded the title when the new club were thirteen points behind unlike this year, when they all want it scrapped… 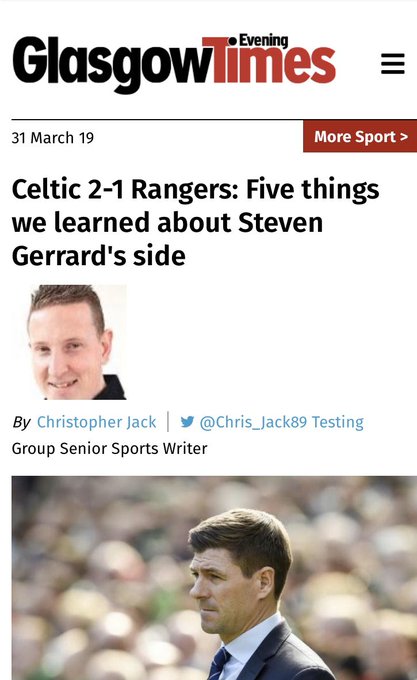 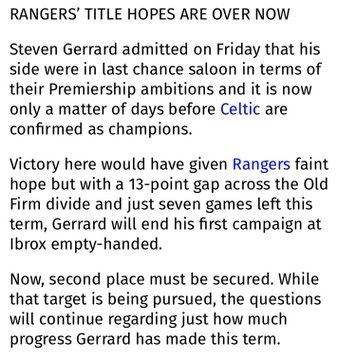 “Hopefully, that will be the final decision and Celtic will be named as Scottish champions again.”

The SFA are waiting for others to lead the way so they can say that they are doing what everyone else is doing, largely so they don’t draw any attention to the clusterfuck that is Scottish football.

Incidentally, there is kind of a pattern to how the media spin the bad news at Ibrox….

As we know, they are skint again, and recruitment could be a problem, so the Record thinks it’ll be Gerrards contact book that will save them..

which it appears is a prerequisite of being a “rangers ” manager…

Thanks to James ebt Kirk on twitter for pointing that out…

The National lottery have upped their game, and it suddenly became worth the two quid a ticket it costs, and can no longer be seen as just a tax on poor people who have vivid imaginations… 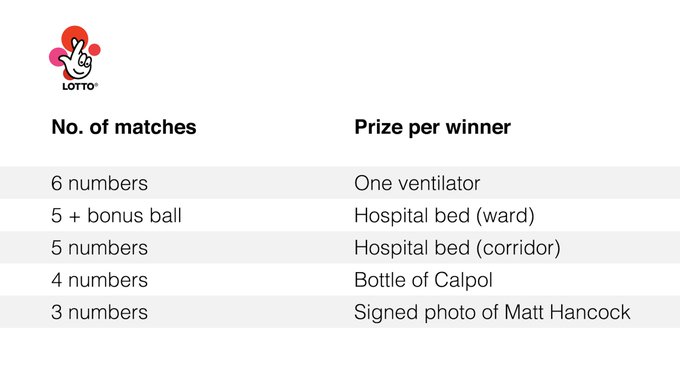 Stay safe, and for fucks sake don;t take any notice of the shite thats eminating from Westminster.

We’re on our own here.

Do what it takes to look after yourselves and your own.

I’m considering an open letter to boris johnson, in the hope that I’ll get a similar response from him to the one i got from Peter Lawwell to talk things over.

If I get in a room with Johnson, kids will learn about me in school…

Monti
Caption: Larkhall bear looks amused as his cooker is finally removed from his front garden.
Puts me in mind of a tory who said during an election campaign that elections were not won by people with cookers in their gardens…
today…

Finally, does anyone remember this little ditty, which was sung many , many years ago on the terraces…. 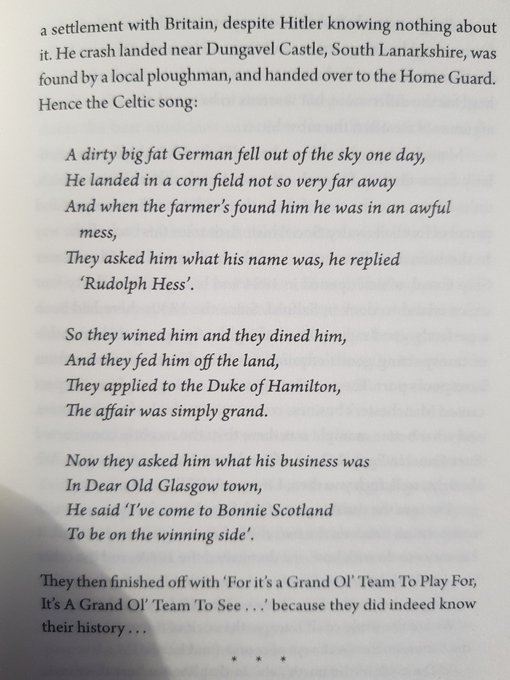 And what was the tune to it ?
0 0 vote
Article Rating

Ya couple of fannies.

Caption: you gave me a used wan ya bitch

Caption: Just cause their yours doesn’t mean you should always get the fresh ones.

Caption : ‘Mommy, why are those people wearing bats?’

Caption: I think Ebay’s ripped us off with these Deputy Dawg face masks

Caption: How to catch a Whoopsie! in ASDA

Last night my internet went down & the engineer said it could be anything between 24 hours & a week?

No Fifa for the next few…ah fuck sake min.

Quality service m8, i got a semi when i seen the openreach van pull up!

There’s a pube in this one.

Ah the banter about footie players, the issue is furloughing support staff. Large EPL clubs are taking the piss a bit like Liewell.
Simila to the Null and Void brigade with their smoke and mirrors.
The truth is sporting integrity and integrity in general is now a game of greed. Look at Uefa in total denial about the crisis

I just felt that our gimp masks wouldn’t have been appropriate, yet you’ve come out in that fvckin shirt.

Caption … All together now ,to the tune of the wheels on the bus…

Caption “Betty where did your granny get these second hand face masks, i’m sure i can smell a hint a pish”

Caption: New! From Ronco – the Boris Johnson accent generator! Amaze and amuse your friends as you put on the generator and immediately sound like a massive, waffling fanny! (Ronco cannot be held responsible for any assaults by blind people while using the generator).

Caption.
How long do I need to wear this Shona?
ALWAYS.

Totally agree with your tax analysis Ralph. We need a rethink on how the wealthy contribute , and what the government can do . But as we all know , it wont happen. This whole stimulus package is costing a load , and it wont be tax exiles and billionare businessmen who foot the bill. it will be increased taxes for workers and more cutbacks to essential services.In my view we now have the biggest bunch of heartless , lying 2 faced ministers of any UK government. Like you say, WE are on OUR own here.

Caption : you worried about corona virus?

Naw mate, got a nose bleed

“Look Senga, dae ye no think it would look better if we jist stuck twa aye them tampon thingies up wir nostrils”.

CAPTION
Darling I feel a bit of a count wearing used panty liners.

Caption,lil lets the best a man can get