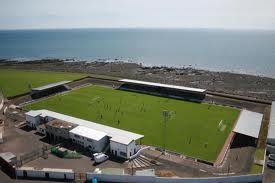 “Very cold, with a few wintry showers continuing from throughout the day.”

Anyone travelling up to Arbroath tonight would do well to put on a sturdy warm jacket, as the glamour of the cup returns to the fixture list. The picture at the top gives an idea of how exposed the ground is, and thats the artic ocean in the background. Nearly.

Failure to dispose of the second division side a couple of weeks ago at Celtic Park means that they have to do the business tonight, and Neil Lennon adds Mikael Lustig and Paddy McCourt to the squad, with Gary Hooper also reportedly having shaken off a virus. There will be no Kris commons or James Forrest, so you kind of wonder where the goals will come from, but frankly as long as they do come, none of us will care.

Manager Neil Lennon is wary of a possible upset, and this game could prove tougher than most, as the Red Lichties will be up for it, as will the whole town , in fact.

“We are taking this game very seriously, ” said Lennon “It is a different competition but one where we have had no recent success and we would likw to progress so it is another important game. The way things have been going in the last week to ten days , you want to keep that feel good factor going and this is potentially very dangerous. I have been on the end of a few cup upsets as a player and a manger and I don’t want that to happen on Wednesday.”

Celtic do have a habit of losing to smaller clubs, and another good performance away from home will see a huge sigh of relief tonight. The game is on Sky TV for those who can’t make it, and you really couldn’t fault anyone for choosing that option as the Mayan end of the world approaches and the temparature drops.

Lennon is also a little surprised that the SPL have refused to alter the fixture schedule to help the current logjam that Celtic have. Actually, he’s surprised because he hasn’t asked them to , and doesn’t “know where this story has come from”

He goes on to imply that he wouldn’t ask them for help anyway, as he wouldn’t get it. Probably still smarting from the two games in two days that are likely in May, the champions league final and the Scottish cup final.

He’s been busy, has the gaffer, also being involved a in a managers meeting with SFA compliance officer Vincent Lunny, to clarify what managers can say, and so on, in public. He didn’t reveal details of what was discussed, but added that it “was very productive”

Which I think means he didn’t pick up another ban.

David Leggat, the blogger who truly defines the word bampot, was smarting yesterday after Talksport pulled his interview to promote his book about Scot Symon, the unfortunate Rangers manager who was in charge when jock Stein was at his peak, and when Berwick put them out of the Cup. Leggat apparently has used this tome to besmirch Stein, and it appears the radio people figured  the loonball didn’t deserve airtime-or oxygen-and he was told he couldn’t go on.

True to form he has blamed Celtic supporters, the IRA and catholic schools for this, whilst blasting the cowards at Talksport.

Speaking of loonballs, charles Green was on the telly last night to put the record straight on the dispute that 67 players have with his club-whatever it called these days. The bold Chuckles said its not 67-like it says in his prospectus-and continued to bluster about investors and what a damn fine guy he really is. He kept saying he keeps all of his promises and can be trusted.

He also said that the titles will not be stripped from his club, as he has “bought them, along with the history”

Enjoy him while he’s here, you’ll miss him when he’s gone.

Speaking of gone, where is regular contributor Pensionerbhoy?

The minutes silence for the Queen mother was the other event when Celtic ftook five off Livingston to secure the title a hundred years ago, and other great days out when leagues are won remain stuck in the memory.

How many of the nine in a row were won at Celtic Park?

Any chance of a question that us under 45’s can answer ?

Did they win any of these at Ibrox per chance ?

fuck knows im too young although judgin by the level ae sectarianism and bigotry that ruled scottish fitba back then lol back then see what i did there a would go for three coz every trick in the book wouldve been pulled to stop us.

Good to hear Leggat did not get air time. I actually Bhoycotted Talksport yesterday after the diary saying he was on. Good to hear I can go back to listening today.

if none is true thats a great wee bit o info. Pretty amazing when you think about it. Hittin a few auld tims wi that soon

aye where is pensionerbhoy? i usually steal his answers for oor homework

man i wont shut up today. But i fully recommend “Paradise Road” Stephen O Donnell (as featured on podcast)
along with”not playing for Celtic” David Bennie among the better celtic books i ve read.

right i ll shut up

“He also said that the titles will not be stripped from his club, as he has ‘bought them, along with the history'”.

Finally the Huns admit they bought the titles, rather than won them.

Right, i’m starting to get worried about Pensionerbhoy. Can someone who knows him give him a nudge?

The 9 in a row titles were won as follows:

He’s alive and well. I think the pre Christmas shopping frenzy has left him in a victor meldrew style craze.

Cheers Son of – tell him we’re asking for him!

For those going to gayfield tonight the picture up above whilst appearing to show a nice white sky is actually a massive ice berg that sits off the coat of angus all winter & sum o the summer!!! You have been warned!!!

Yh I thought we had managed to secure one o the nine in a row at paradise but that ws the hampden one great days!!

Vote Up0Vote Down
tam the tim

Was at Arbroath just once must have been late sixties/early seventies, can’t remember properly, the eldorado old tawny dulled the memory banks. Was at most of the nine in a rows,all away from home, don’t exactly remember where, that old tawny was potent stuff.

ah want to know when we’re gonna get a question where the answer is Ronny Glavin? Been waiting ages for that!