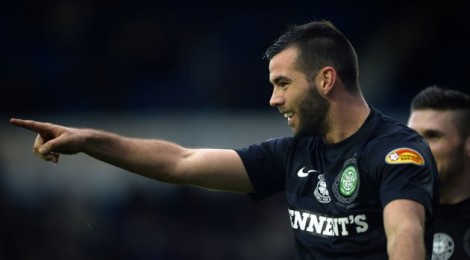 Another Monday, another belated match report. Blame the drink, blame the post-Spartak match euphoria but don’t blame it on the boogie.

Celtic won 3-1 at Kilmarnock with a result that flattered the hosts and arguably witnessed Celtic’s most controlled domestic displaying of pass and move attacking football this season.

Lenny tweaked the system a bit going three at the back – a ploy I think we’ll see far more of in the SPL – as Chuck tucked in to play beside Wilson and Melrose, as one of our twitter followers Da’s calls big Efe. Oh the shame of it!

From the first whistle Celtic were impressive. Wanyama, Brown and Ledley completely controlled the midfield leaving Matthews in particular ample space to cause havoc in the right wing back area.

It was the young Welsh international who was at the centre of the opening goal when his great run and pass allowed Broony an opportunity to put his left foot shot past Killie keeper Bell, whose wrist wasn’t strong enough to prevent the ball crossing the line – oh aye!

Despite Celtic’s control the home side had a great chance to equalise early in the second half but a brilliant block by Mulgrew denied Heffernan what appeared a certain goal. This merely pushed Celtic on a gear as they upped the tempo of the game and soon got their just rewards. Another fine passing move set Brown free in the area and from a tight angle he played a lovely ball across the face of the goal for Ledley to bundle over the line

That was good but not a patch on the 3rd goal…

A move consisting of 22 passes and involving all 10 outfield players resulted in Matthews playing a beautiful cross onto Sami who bulleted a header in off the underside of the bar. Quite exquisite. Watch and enjoy.

Killie got a fine injury time consolation from ex-Celt Cillian Sheridan but in all honesty Celtic were first class and worthy of a four of five goal victory.

With the Champions League now safely tucked away until February I expect to see Celtic regularly turn in performances like Saturday’s with Lenny looking to deploy three at the back more often.

← This Team is on Fire
Celtic Diary Tuesday December 11 →