Skip to Content
Home Home Page Latest Celtic v Hibernian : Outfoxing The Hibees
Ralph Malph 7 Comments on Celtic v Hibernian : Outfoxing The Hibees
Yokerbhoy gives us the lowdown on a possible classic this afternoon in Glasgow
Fresh after our League Cup Final and Europa League exploits we come up against a happy Hibs side at home this Sunday.
What a difference a new manager can make! Playing their trademark brand of attacking football, the Leith boys have suffered only one defeat in their last 5 matches. In a traditional sort of vein, they continue to be entertaining but also a tad erratic, they score a good few
goals but they leak goals as well. In keeping with their character, they generally don’t like to sit in and defend unless they have to face a superior team but even in those cases the Edinburgh men can be very effective on the counter.
There is an unpredictable element about them, a team capable of the best and the worst all in the space of a few minutes. Countless times this season they have taken the lead in games only to recklessly throw it away. The ‘anything can happen’ sensation always makes encounters against this type of team interesting and difficult to predict.
This tweet  explains..
John Bradshaw
@JBLuvsCeltic
Celtic all-time league v Hibs. Hibs have given Celtic more trouble than any Scottish club during the Treble Treble run, losing only 6 of 12 v Celtic in that time. By contrast, Rangers, Aberdeen, and Hearts have lost 41 of 49 v Celtic during the historic run. 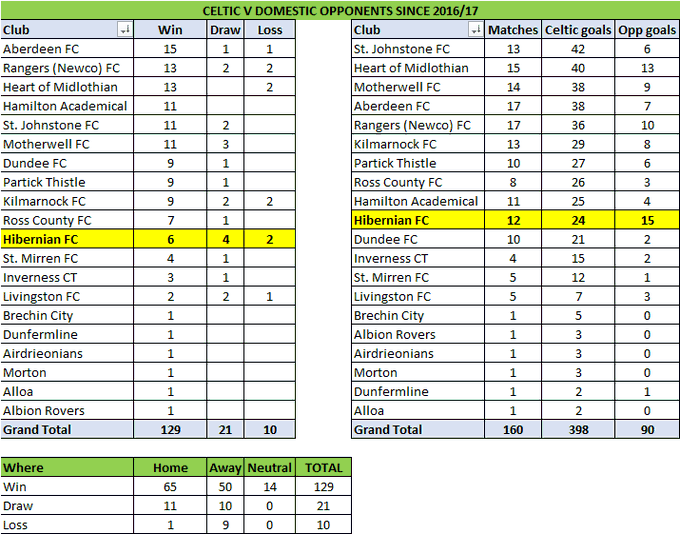 Lately they have been deploying two main strikers, a tactic which reaped its rewards last weekend against Aberdeen. Bustling nº9 Christian Doidge is their top scorer with 7 league goals so far and his speed coupled with his aggression and good positional sense are beginning to provide an ideal foil for Flo Kamberi, who can be a real class act when on song but has been playing through a troublesome ankle issue for several weeks now.

That might explain his lack of consistency. A rejuvenated Martin Boyle, who had been sidelined for months through injury, is also starting to make a huge contribution to the cause with his two fine goals against the Dons being testament to that claim. ‘Boyler’ has blistering pace, good technical ability and an eye for goal. The Aussie
international is a wide player who likes to cut inside to provide tellng assists and/or to get himself into dangerous scoring positions. He’s particularly dangerous when given plenty of space allowing him to go on surging runs with the ball at his feet. All their front runners were excellent last weekend and the pick of the bunch in their 3-0 triumph against the sheep was, of course, the last one where Flo superbly dribbled past three defenders before picking his spot and ramming an unsavable shot into the bottom left-hand corner.
In recent games, Scott Allan is another one who seems to have found a new lease of life. He played very well against us at Easter Rd in our recent 1-1 draw there and he clearly has a point to prove. There is a marked competitive edge to his play while he possesses a tremendous knack of providing sublime through balls and killer passes into the danger zone.
During the early part of the season the Hibernian midfield was a bit disjointed and lacking cohesion but in recent games the ex-Celt has begun to develop a special understanding with young prospect Stevie Mallan. 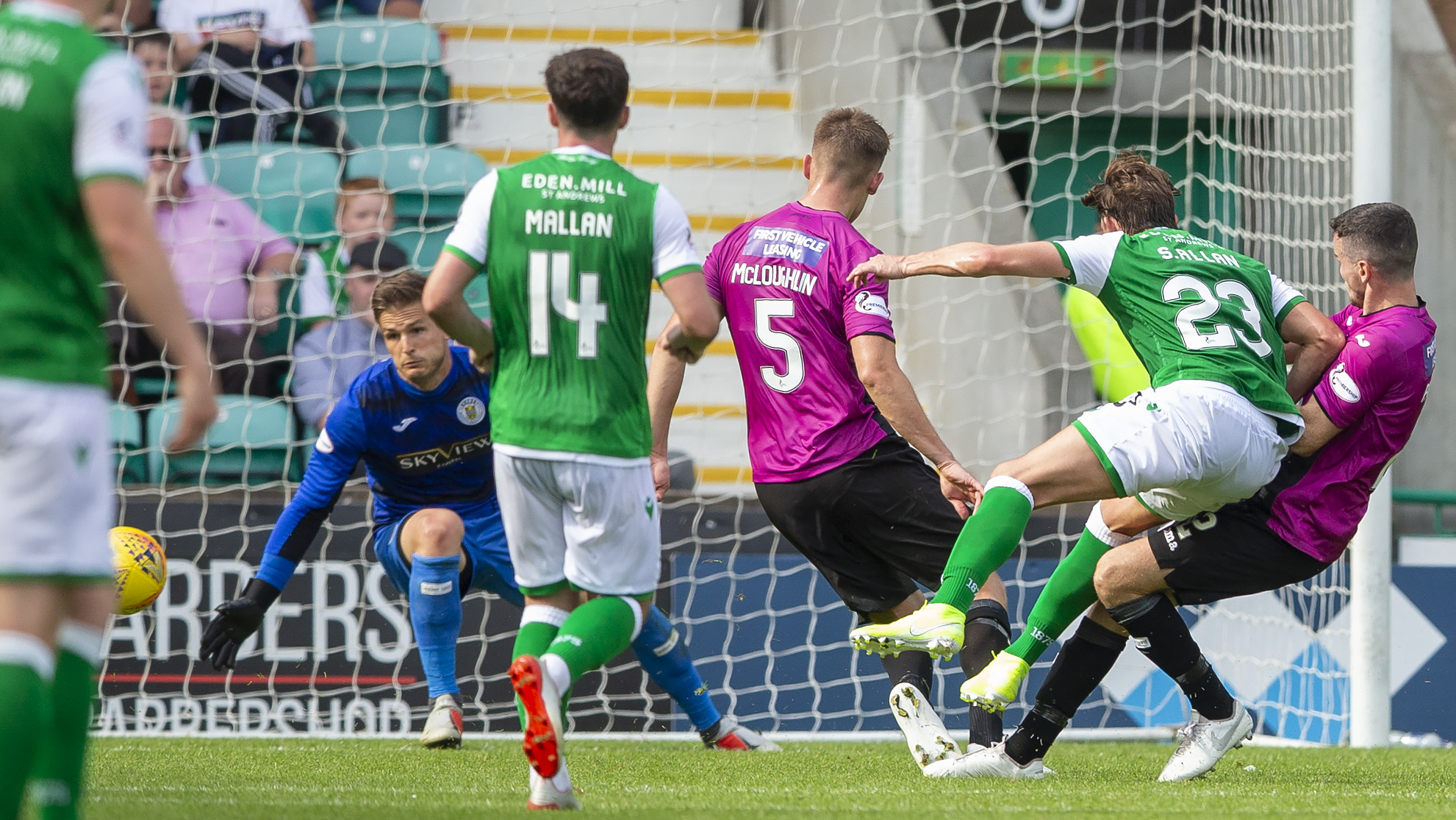 This Allan/Mallan double act has been another key to Hibs’ recent success as they are a quick-thinking and creative
duo that add a great deal to their engine room in the middle of the park while Swedish DM Melker Hallberg is a useful ballwinner who shields his defence well.
In defence lifelong Hibee Lewis Stevenson and Peterborough loanee Jason Naismith are very industrious full-backs who are both keen to charge forward and give their front runners support while Ryan Porteous has been one of their top players of late. Having been awarded MOTM in a couple of recent games, the portly CB has been very solid with a physical no-nonsense approach to each game. The ungainly Hanlon, on the other hand, has been a bombscare for them in the other centre-back position this season and that is a weakness we would want to exploit.
What is likely to become another vital improvement to the side is the reincorporation of goalkeeper Rocky Marciano. 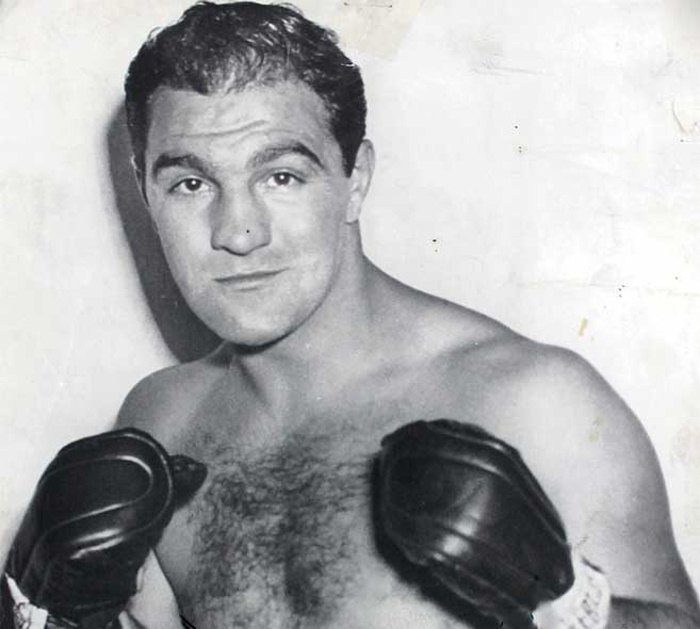 Excellent assessment once again Yoker. Jack Ross is a great signing for the Hibee’s. A manager on the up, one who is always ready to learn. But we too have an excellent manager, one who knows the Hibs players inside out and that is one of our big advantages. Ross knows how to set his team up and his teams have always played well against Celtic. I don’t know how much money we lost by resting most of our top players against Cluj, but IMO. it was money well lost, because A: we needed to and B: it is very… Read more »

How’s it goin’ Mike? Hope everything’s grand. I’ve been a bit snowed under with work lately so will be glad to have a nice rest during the Xmas hols and see a generous dosage of the Tic in action. I wonder if Lenny will follow BR’s tradition of taking the lads out to the sun of Dubai for the winter break or do something else. Here’s hoping the huns seriously stumble at Fir Park and we enjoy a great game and another 3 points at CP.

Totally agreed that Lenny did well to rest his best players in midweek. I know that these results affect the Scottish club coefficient in Europe and we missed out on a couple hundred grand’s worth of prize money, which we weren’t guaranteed to get even with a stronger team on the field but why risk injury and further fatigue to our top men for that, especially with the amount of games coming up?

Morning CS, I’d hope to see Elhamed back in contention before the end of the month but I doubt he’ll make it today. Shved is a bit of a forlorn hope right enough, I probably stuck him on the bench because I was getting a bit fed up with Morgan. 😉

I haven’t heard anything but the fact they never even made the bench is a bit of a worry.

Superb summation Yoker and pleased to say almost all of what you predicted could happen from Hibs didn’t happen. We are missing two and three great chances a game then catch that give the ball away disease bringing needless pressure on. Best by far again was Frimpong and Brown. Bitton did well in the three but midfield is misfiring. Easy to see from the stand but poor movement is followed by great movement but the ball isn’t correct. Big FF slow at distribution then brings off another brilliant save from Ajer’s header.Forrest poor again and Eddy off the pace yet… Read more »

BBC Sport are running a competition for ” moment of the decade”. List includes Aguerro, Suarez , Rooney .Steven G is at no 6 for “that slip”. Could we please all vote to cement his place in history ? Real history, not the convenient made up kind you get down Govan way.