Tom Campbell reflects on a previous encounter between Celtic and Lazio in Glasgow. It was raining.

Well, the last time we played Lazio was on September 4, 1950 ….  and it was a miserable dreich day in Glasgow, rain falling steadily all day long … but it could not stop a crowd estimated at 47,000 turning up at Celtic Park to see Lazio, the first Italian club to play a match in Scotland.

Celtic’s team lined up:  Bonnar; Haughney and Milne; Evans, McGrory and Baillie; Collins and Fernie; McPhail; Peacock and Tully, (and, sad to retate, all of those Celts are now dead).  Lazio looked a stylish side, wearing sky-blue jerseys (similar to Manchester City),  and  started off playing attractive one-touch football) … but eventually they were over-powered by a hard-hitting Celtic, revelling in the Glasgow rain.

Celtic latterly swept aside their Italian opponents to win by 4-0 … and all four goals were scored by ‘Big John’ McPhail There was a pleasing symmetry about the goals rhat buried Lazio: two goals in each half, a matching header and penalty kick (awarded correctly by Scottish referee George Mitchell). 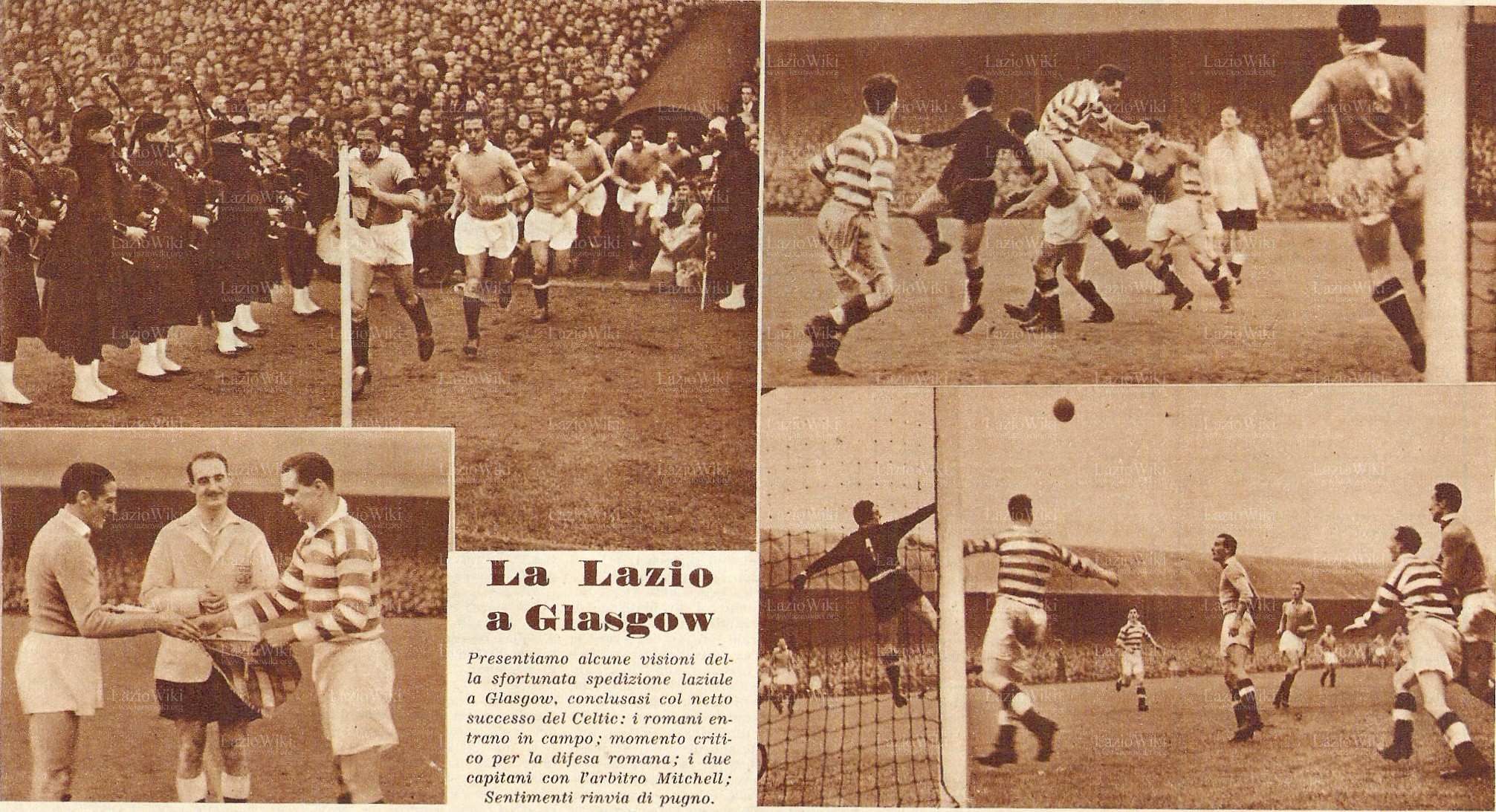 John McPhail, only recently given an extended run at centre-forward, was a man with something to prove and turned in a remarkable performance.   What had Celtic’s captain to prove?  After several seasons as Celtic’s most versatile player (with appearances at right and left-half (even long before his heroics in the 1953 Coronation Cup of 1953), and innings at all three inside-forward positions … at last, he had been given the time to establish himself as Celtic’s centre-forward (arguably a problem position for Celtic to fll since the heady days of Johnny Crum back in 1938).  And John seized that opportunity (eventually leading Celtic to the Scottish Cup of 1951).

But that was not his only motivation in September 1950.

Back in May, Bob Kelly had decided to award his players with a trip to Rome after the 1949/50 season.  It was a Holy Year and Celtic could see the historic sights of ‘the Eternal City’, would be given an audience with the Pope … and play ‘a friendly’ with Lazio, based in Rome and celebrating their 50th anniversary.

Unfortunately, it was not much of ‘a friendly’.  Bobby Collins, who in a long career in Scotland and England proved himself a fierce competitor, described the match as ‘the most vicious of them all’ … The Italian referee awarded more than forty free-kicks and ordered off John McPhail and his immediate opponent.

An urban myth has grown about John McPhail’s  dismissal.  According to John, the referee dismissed his marker for a series of fouls (and a scuffle with him) but then turned to Celtic’s captain and told him to leave the field “to calm down the crowd”.

It doesn’t quite ring true, that account.  Almost certainly (judging by the number of fouls awarded by a capable referee who apparently performed well later as a World Cup official)  and the rarity of matches between Scottish and Italian sides), this must have been a difficult match  to referee.  Certainly, there would have been a culture-clash on the pitch.

Would love to have your memory. I can vaguely remember playing a “foreign” team around that time and my father talking about how “dirty” they were. Being a bit of a yokel from the outback, I had a rather naive image of “dirty”. It was long before more regular experiences of European teams clarified what it meant. It has always confused me how teams that could play such exquisite football could turn to the most insidious methods to achieve success – or rather to prevent defeat.

Even if my memory cannot recall the details of matches such as the ones your article describes, I thank you very much for reminding me of the giant that was John McPhail and his contemporaries that graced the green and white and I saw in my football infancy.

You have made my day 🙂

These tales are tales of wonder, so a big thank you to Tom Campbells wonderful writing and memory. As a two year old in 1950, it would be a few years until some of those Celtic names would take on meaning. Yet I was still able to see some of them play from the safety of my cot.
So a big thank you to Tom for all his historical references and archival works.
Stadio Olimpico with a capacity of over 70,000, as its name suggests once held the “Olympic Games” and the World Cup finals. This Rome’s second Coliseum will only field football players, they will be the Lazio Gladiators and the Celtic will field their “Lions”. The Lazio Ultras also like a Pyro party, fireworks and a lively banner, so the green brigade will have some good company. Did Paul Gascoigne play his flute to a different tune, when he played for them? While Lazio play in Serie A’ Glasgow Celtic, the “Star of The See, The Holy See”. The passion of the Celts.

My pyros are fizzling out and while I used to enjoy a good cocktail party, I am left now with just a droopy tail. It’s a bad day when the hair o’ the dog is the one and only drink 🙂

More importantly, I hope you are well. I really should email you but life seems to be busier than ever. Either that or I am getting a heck of a lot slower at doing things. The latter may be nearer the truth.

Anyway, I only hope Eddie can do a McPhail on Thursday. I do feel a win against Lazio just about guarantees progress to the next round. I believe we will get at least a draw against Cluj and will defeat Rennes at home. Our problem is ourselves. I wish I knew why but we are still blowing hot and cold from game to game and you never know which one will be which. In all honesty, “on their game”, this Celtic team could quite easily go the distance. Unfortunately, they are not consistently “on their game” 🙁

P.B. Good to see you posting, your quality shines through, my Pyro point was about my post not getting through “another one bites the dust”. Once we set off “Fizz Bombs” and now the Fizz has fizzled out. I agree with you, this team can still get better, but they have been together for a wee while and some of their play is extremely good, its great to see. Its the number of the games and on three plastic pitch’s in the top flight? its helping to destroy the Scottish game, all Scottish clubs played on grass previously, this modern concept is not so good, progress ? I do not think so, that and the standard of refereeing is going backwards. The SFA are in denial. Take care my friend and all the very best to you and yours.

Excellent piece, Tom Campbell, and I wish you peace and good health, aye. I was only 8 months old at the time of the events you describe so well so have no memory of them! A great read.Like many on this site I wonder why good footballers from a good footballing nation resort to cheating and amateur dramatics. I hope we don’t see any of that on Thursday night. Many thanks!

In the lead-up to the Scottish Football League match against the Italian League in Rome in 1962, one of the Italian newspapers ran a double page spread on the debt Roman football owed to the students of the Pontifical Scots College, Rome. I can’t remember all the details but apparently the Scottish student priests set up a club which eventually, in about 1900, became Lazio.

The way Charlie Tully described that game in Rome it seemed like the return game against Racing or the home game against Atletico,

Always a pleasure to read TC