Well that was an interesting wee game eh?

Celtic showed some lovely wee passages of play and won easy enough despite the usual gift to the opposition. That gift was the only downside really and there were a few highlights on view.

The interactions between Christie and Edouard were very nice and could really light up the season. Big Eddys touch is a sight to behold at times and Christie has really started the season with the look of a man ready to take on all comers. Hopefully both can avoid the hammer throwers out there.

The tenacity of Morgan was welcome, made a few mistakes and lost a few balls but never stopped trying and sent in some great crosses and passes and has merited a good chance at claiming a jersey.

The industry of Boli almost matched his keenness and it was good to see him really going for it. The mistake for their goal was a bad one but he will learn from that and good to get those moments out the way at this early part of the season.

The cover provided by Calmac, let alone his goal, was excellent, At one point he was positively Broonyesque as he raced to catch up and then leant into his opponent and simply guided him off the ball to tak ethe ball away to safety leaving the Sarajevo man running into empty space.

Sarajevo were abysmal when it came to leaving the boot in. Awful tackling and Ajer, Christie, Forrest and Broony all stared open mouthed at the inept Referee wondering how the hell the team in burgundy(?) were still showing 11 men on the park.

Bitton and Jozo are never a centre half partnership. The Sarajevo goal was initially caused by Boli’s dreadful pass but the placing of Jozo and the ineptness of Bitton allowed Sarajevo to lift the ball into the centre, calmly head it down and then take 2 touches to lash beyond Bain.  This square peg in round hole approach is a nonsense and we need to stop the same nonsense at the start of every season.

Speaking of square pegs and round holes…Ajer is never a right back either so lets stop this nonsense which is detrimental to 2 positions in our side. Lets get our 2 best centre halves playing time together ( Please God let Jullien just be fragile rather than Comperresque) and get a decent sturdy right back in place for next week.

Speaking of right backs; The end must be nigh for Anthony Ralston given Lenny now talks of bringing in 2 Right backs so hopefully we let the boy go as soon as we have cover, he deserves a chance elsewhere if hes not in our plans.

Lenny loves a late sub eh? The side were looking a tad tired on 70 mins but he didn’t seem bothered about getting fresh legs on, even after Sarajevo had been kicking anything with MAGNERS ( whats that all about on the back of the jerseys in a WHITE hoop with names in a green hoop and barely readable?). It was good to see young Henderson get on and Griff get 15 mins but hopefully Lenny gets that Number board up a wee bit earlier as we start to really hit multiple games per week.

Injuries seems to be a constant as always…hopefully just an early start of season, wipe the cobwebs away sort of thing but Jullien, Bayo, Johnston have already joined our clinic regulars like Rogic…hopefully the Curse of Lennoxtown can be exorcised.

So its now onwards to compete against Nomme Kalju,who apparently are not a character from Star Wars but actually are a team from Estonia. Hopefully we have a right back in place and with the home leg first, we have Christie and Edouard firing on all cylinders to get a healthy lead to take over there.

Never mind Winter is Coming, August is Coming and bring it on we say!

Bain 6 – Not a lot to do really bar pick the ball out the net at the goal ( one was also disallowed but that doesn’t count). Came and claimed a few crosses and no complaints.

Ajer 7 – Got stuck in but never a right back. Lost possession a few times and made customary 3 slide tackles each half. Always protective of our ball players which is always good to see.

Bitton 6 – Decent enough but limited opposition still showed big Nir should be far from our first team in this position at least.

Jozo 6 – Like Bitton, he didn’t have a lot to do but understandably theres no sense of partnership there.

Boli 7 – Being positive about his positivity. raced up the park and even had a shot or two at goal, one even on target. Will score a few this season but might need some defensive direction to ensure he doesn’t cause a few more like he did with last nights gaffe.

Broony 7 – Took the game in his stride and calmly reminded the Sarajevo hackers that he knew how to hand it out when they stepped out of line.

Calmac 8 – Up and down and all around..a great showing capped off with a goal. Broonys Apprentice looks ready to be the master soon enough.

Forrest 6 – Tried to hit the by line, Ran into his man a few times and met a few hacks here and there. Switched wings to alternate the play so at least good experimenting with Morgan.

Morgan 7 – Industrious and enthusiastic. Made a few mistakes but played like someone with a true goal and really kept going. Lots of positives on view especially his final ball into the box. Could do with an extra yard but an overlapping right back would also help him so lots to look forward to.

Christie 8 – A lovely footballer. Takes the ball and strides forward in one motion, no 2 touches or 3 point turns to kill the momentum. Linked up great with Eddy and scored a peach of a finish. Took a few free kicks too so clearly ramping up on responsibility. Could be a big big season for the Love Island devotee in the Hoops.

Edouard 8 – Took a wee while to get up to speed as ball seemed to be getting caught at his feet or he would stumble between defenders. Then just as you think “its one of those nights”, out comes the twinkle toes and Eddy has made a yard and made 2 defenders look stupid just with a shoulder dip and a drag back. Made Christies goal for him and these two should be hoping for at least 40 goals this season between them if not by Xmas!

Griffiths 4 – Won a shy after chasing a lost ball down. Will have to bide his time but least that’s him back and getting game time. Hopefully can kick on soon enough.

Sinky\Henderson 3 – Just on and game was done really. Hopefully more game time in weeks ahead as Lenny uses full squad..

Lenny 6 – Straightforward win and good to see him set out positive side. Hopefully he is pushing the board for Right back signing as clearly needed. Some earlier subs would be nice but also that’s 2 daft goals in last 2 games so need to get the concentration levels worked on as well as physical fitness. So far so good but the journey has just begun and the mountain looming into view.

Get that Magners in the white hoop on back of jersey to buggery please! 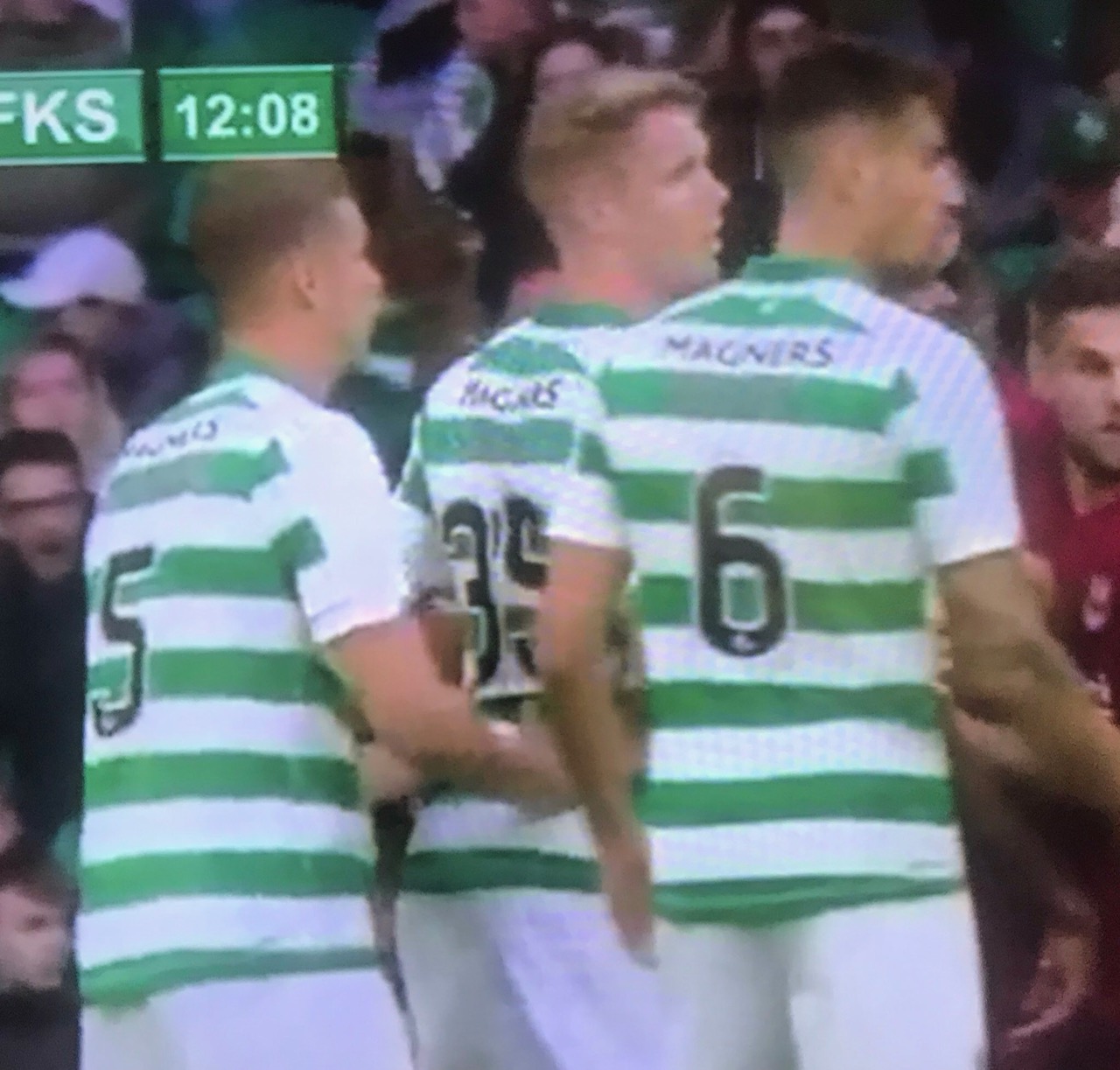 Desi fair comments, I know if you are looking poor against a better team the temptation is to kick out but Sarajevo did themselves no favours. Some clubs in their position try to make friends and see what that might bring them in the future, frankly glad to see the back of them, don’t care if we never see or hear of them again. Still can’t undrrstand why we can’t get a right back even if we have to pay a bit over the odds 8 months later who will care? I wondered if Bain had a wee twinge, the… Read more »

Lennon is signing nobody,dictator of football Lawwell and his favourite agent are running the show

Vote Up0Vote Down
B Boru

What happened to the CELTIC DAIRY today, Ralph?

Run out of milk tokens?

Don’t forget they had the ball in the net in the first 2 mins and Boli was to blame there too. Bolingoli is not a right back, maybe an old fashioned right half, but not a defender.

But at least he knows the difference between right and left eh Paddy.

But Boli passed the perfect ball to a seasoned forward who fluffed it.

Till the next game.

This`s going to be good.

A player out of position player.Either side.

You cannot read too much into these pre-season ties, usually the opposition are made up of lower league opposition, its taking the rust out and putting the players touch and energy back into their legs. Man the breaks are getting shorter for player recovery and the number of games seems to be getting longer, you must feel for the players, yes they are highly paid, but physically and mentally there must be huge pressure on them all the time. Eight games for champion’s and just to qualify for the C.L. ridiculous, while the richer league teams have longer breaks so… Read more »

FFS Pal! Ime gladd yoo got spillchick oan yer compyooter, but FFS twy an’ dinny state such prophundity oan here….yi’ll end up with yir bell-end up a bull’s erse. FFS Pal! FFS Pal, as a FN addendum, “spillchick” diznae spot plagiarism; do you suffer from that wee Achilles’ heel too? Just askin’, but FFS Pal, eh? Hail! Hail! The Celts are here, ***unbroken Hist’ry here now…unbroken Hist’ry here now….(all MY own invention) (and I’ll plagiarise someone from another Tim site, “Fritz a grand old team to play for……” *** Copyrighted from *’plagues’ (*an infection of no marks). * This too… Read more »

RALPH!! Get this FKN moderator sorted Pal. Please.
Ma comments keep me laffin’ a’ day!
Dinny join the pygmies from the Fuckarrwie tribe who were 4 fit tall and lived in 5 fit high grass and were often heard to proudly scream: “We’re the Fuckarrwie” or was it “where”? 🙂
HH

The best the defence we`ve had has been was when Lenny played with midfielders outside the box picking the ball up.

Second nature is to know where your player is without looking.
It`s expected from all.