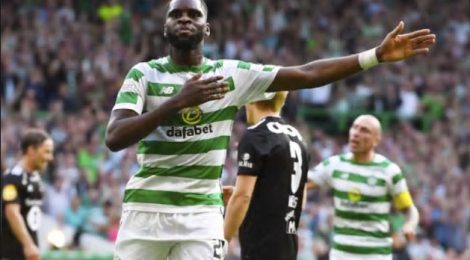 Here we go again…
As I had recently been on holiday, this game was my first time back this season.
Parking down by Shawfield ( thanks new parking restrictions!), i enjoyed the latest crazy rays of summer sunshine, walking up

passed dalmoarnock station, passed the regular charity bucket shakers and with a final couple of nods to the busker singing “Rhebel

Rhebel” and the wee Piper (who has definelty taken a streetch!). i crossed over London Road and headed up the Paradise Way. 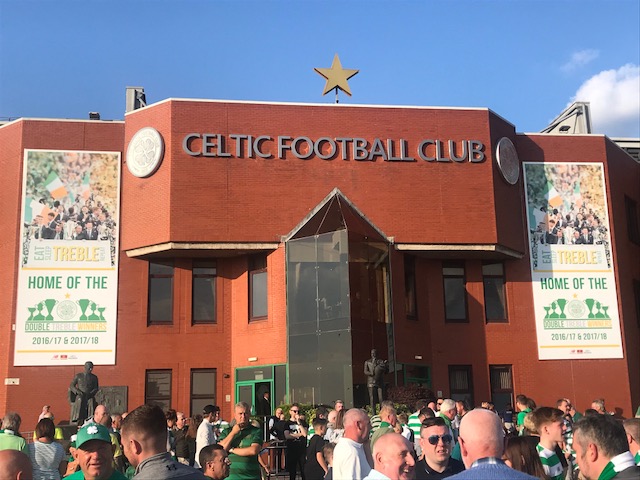 Into the stadium and I was hoping to enjoy the new multimedia setup but still in Work in progress mode it seems.. 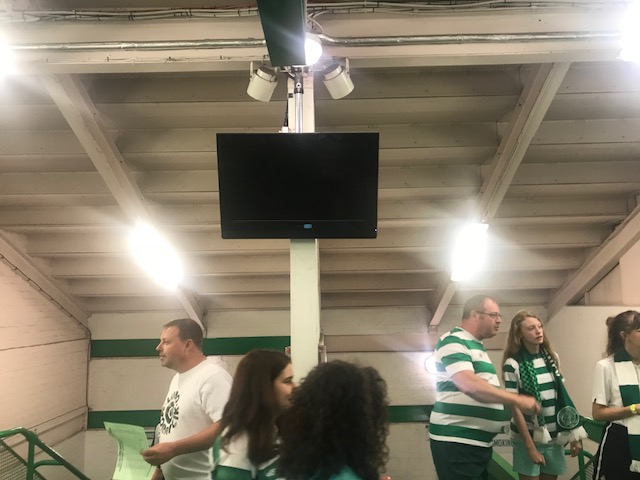 I was hoping to check the teams out via the screen but had to resort to the Retro-Celtic approach and look at the wall. 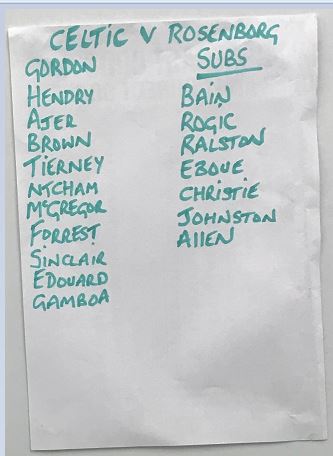 After a  quick punt on James Forrest any time goalscorer(doh!) and a Paradise Windfall ticket (dont even think I was in the same alphabet!). it was down to the seat.

A wee “Awright” to the regulars and soon enough out came the sides. 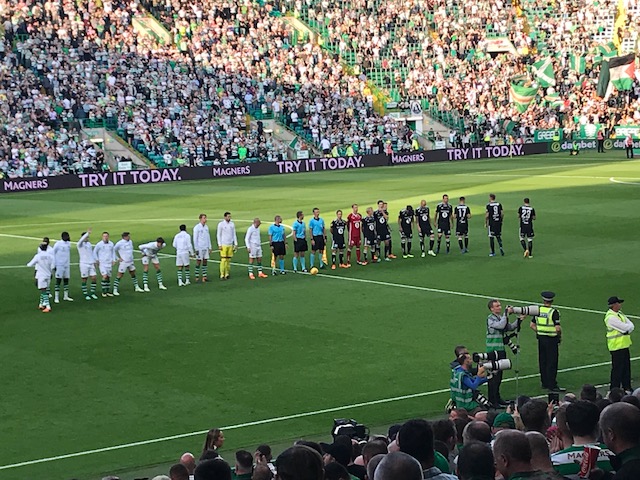 The crowd went into rapture and everything was looking and feeling good under the new LED lights and summer sunshine as the team went into the Huddle. 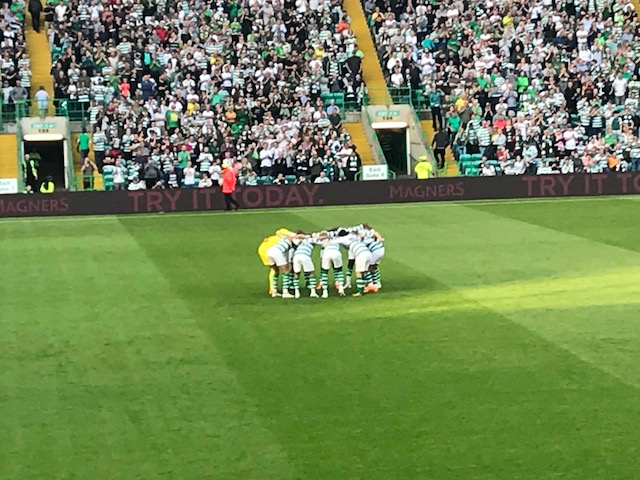 Sadly 15 minutes later and it wasnt looking so good and it was basically all Brendans fault.

Celtic started the game with a formation that was all askew. Brendan tried the old “make players fit formation” gambit rather than the clever approach of making a formation to fit the players available.

Despite Moussa being injured and removing the recent partnership between him and Eddie, brendan persisted so James Forrest was placed inside beside Edouard and they two stood just in front of Callum MacGregor so none of them had any space to move or pass. Meanwhile out on the left Scott Sinclair and Kieran Tierney were trying to remember what 2017 felt like.

In the middle, Scott Brown and Olivier Ntcham seemed to be  standing beside each other in a daydream discussing holiday highlights.
That left the defenders…

Cristian Gamboa had been added back into the squad and somehow Brendan  expected the guy to play right back, right mid and right wing, all at the same time.  And in middle of defence, Kristoffer Ajer was combatting well with human tree Nicholas Bendter  while Jack Hendry was looking about thinking “Am I really playing?,,really?”.

As we have come to expect, theres always “one” and this time it would be Hendry that would gift Rosenborg the goal.

With a packed Rosenborg half, Hendry was forced to bring the ball forward and on seeing a crowded area with every Celt blocked, Hendry duly passed the ball straight to an opponent who soon launched a counter attack into our sparsely covered half. The Norwegians passed the ball about a few times and after a nice wee spin away from Broony, the ball came to Meling who duly passed the ball into the net beyond Craig Gordon.

It all wasnt looking good at all but Brendan finally gave up with his wacky plan and called James Forrest over for a touchline chat. The crazy maverick tactician Brendan decided he would try to balance the side and make space by moving Forrest back to right wing.  After the rejig the team managed to finally settle their nerves after half an hour and found some momentum.

With Forrest aiding Gamboa, this allowed space both in the middle and up front. Suddenly N’tcham shook off the cobwebs and Broony began to find his rhythm. MacGregors was getting on the ball and switching wings and Edouard was able to dribble without running into his own team-mate.

After a few close calls, the equaliser finally came via nice work by Sinclair who played the ball into Edouard who took his hime and stroked the ball home passed the Rosenborg keeper. The Hoops pushed for a second but the referee seemed intent on going in level and it was 1-1 as the sides went down the tunnel.

Barely had I got over cursing that Paradise Windfall carve up and Celtic were 2-1 in front. Good work from Sinclair and Tierney made some space down the left and the ball was played into Ntcham. With poise, patience and pure skill, the Frenchman, created half a yard before curling his shot into the net from 20 yards out. A peach of a goal and the crowd and team went wild. The best celebration was from Olivier himself mind. 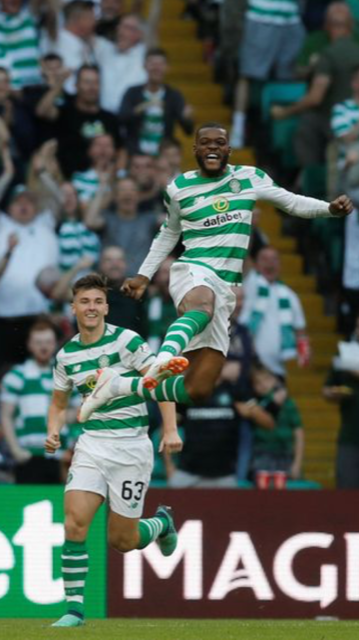 The hunt for a good win was now truly on and Celtic went for the jugular. They would in fact hit the woodwork times in the game as well as have a few penalty claims waved away. The only other goal however would come from a sublime finish from Edouard who raced onto a through ball and gently lifted the ball over the desperate keeper with the Rosenborg players screaming for offside. I watched the ref who had immediately raced over to his assistant but after a quick chat, the ref gestured that the right back of Rosenborg had played Edouard onside. The goal stood and it was 3-1.

Thats how the game would finish but in reality 5-1 would have been a true reflection.

Over there we need to be calm and professional but we could have Jozo back and maybe even a few others. Tom Rogic also got 15 minutes last night so that should also aid any need for ball retention over there.

Next week is next week though and sticking with last night, it was a pleasure to watch Ntcham and Edouard demonstrate their class, vision and skill. I was also impressed by young Ajer who really does take command and had a few great direct runs through the Rosenborg spine. Special mention too for Gamboa who did very well and deserves to keep his place on that showing. we just need to be professional and Brendan to keep the tactics sound.

After the game it was the long walk back to Shawfield for the car but the result meant I hardly noticed the walk bar enjoying seeing a new hero in town being celebrated. 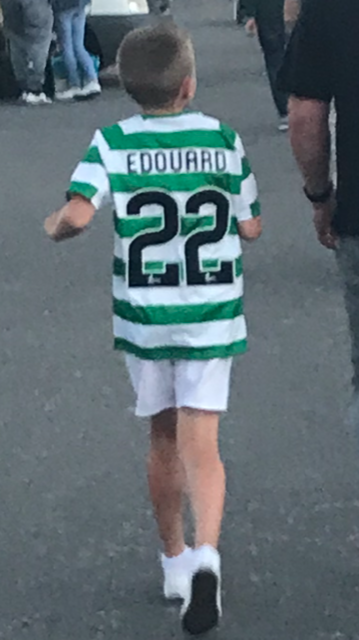 And we achieved this without the need to sign Barrie McKay from Forest! According to footballfancast.com, celtic should be hunting down his signature!!

As the Rosenberg manager said – Celtic are a different level from them meaning better. Could have easily been 5 or 6 -1. Play anywhere near the intensity of the second half in Norway and we will be good for a trip to Athens. If we get to AEK and beat them do we have one more qualifier?

Yip, that when the other “big” teams arrive but at the very least we would know we had qualified for Europa as a backup by then.

I know i know, but a pressure lifted after last nights first 15 minutes had me wondering if they new lights would ever be on in the autumn nights of 2018 and beyond

Pretty sure the parking restrictions idea has been binned.

D.Mond?…..Please don’t take photos of wee Bhoys…..these days the BBC will have a helicopter flying over your mansion while hunners of polis check your browsing history….

I hope the club learned a few lessons from the game last night. Not least of which is if you spend a bit more on players you get match winners. Both Edouard and Ntcham cost considerably more than Hendry and they won the game for us…possibly won the tie and opened the door to further riches. On the other hand, project “Hendry” could have lost the game for us. When will we learn not to buy players like this? He could turn out to be a bargain but at the moment he looks every inch the type of player that… Read more »

Whatever Brendan said at half time should be bottled and sold.
Superb in the second half and unlucky not to get another two.
The team d fensively should get stronger, but Lawell has to provide funds for a strong defender or two, I am sure fans marched to Paradise to marvel at the light show.
Eddie is pure class, Ntcham makes it look like a stroll in the park.

Post gone missing! I have looked in my bin, can someone look in the etims bin?

I thought McGregor put s great shift in last night could easily have had a wee brace himself with a bit more luck with his shooting.
Very underrated footballer who I think is blossoming under Brendan?
Could save us a small fortune in years to come with the amount of positions he can cover.
Great result,