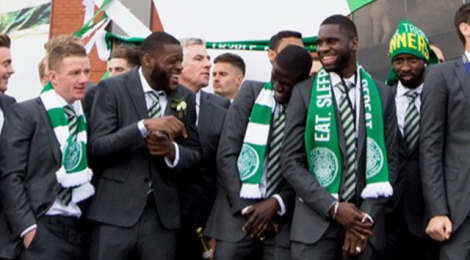 In the end it was all quite straightforward, a brilliant pick up and half volley by CalMac and then a pinpoint precision drive into the bottom corner from our smiling acrobat Olivier. 2-0, game done and the Double Treble achieved.

The sun was out and the champagne flowed, the tears flowed, the pish really really flowed. It was a flow flow quick quick flow sort of day. How lucky we all are to enjoy such happy times.

Celtic duly join the ranks of lowly PSG and the mighty New Saints as the only DT achievers in European football.

“Quite remarkable!” as David Coleman’s puppet used to shriek on Spitting Image back in the days when Trebles only came in the singular or in reality, only appeared in pipedreams for Celtic fans.

Of course that was then, and this is now, and now is a very different landscape. In fact its a whole new world if not Universe.

We are masters of all we survey, conquerors of new historical horizons and drivers of the big open top bus called Legend. 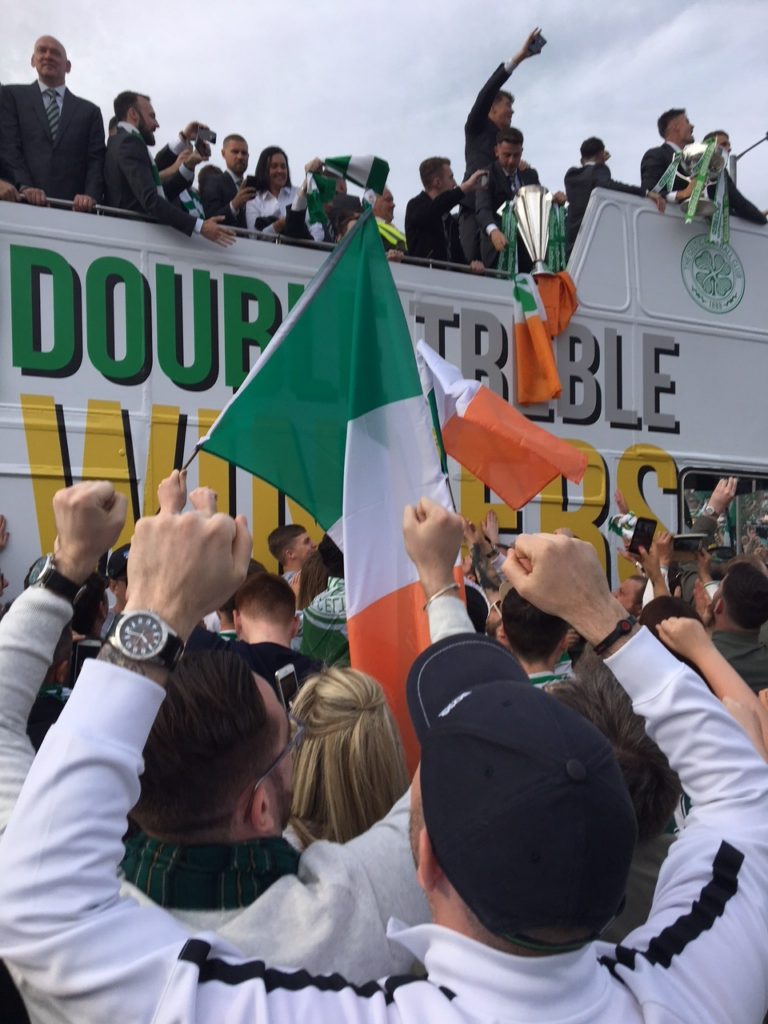 I could write for ages about the gulf between us and the rest, but why worry. Brendan isn’t worried and in Brendan we trust. We should expect to see some changes over the summer to go along with some of the excellent reinforcement and reinvigoration that comes with rewarding new contracts for current stars like Safe Second Scott Bain,  Twinkle Toes Tom Rogic and the expected deal for Exocet Eddy. ( He has signed, honest! — Ralph)

Best of luck to all of our lads who are off to the World Cup. The Double Treble may be amazing but I’m more in shock  knowing Cristian Gamboa will get to see what a current Duty free shop looks like!

In a few days I will write up a review of the season with some of the key pointers ( high, lows and wtf’s!) over this season and ask for everyone’s thoughts . We should all have sobered up by then, well a little bit at least.

A big thanks to Ralph for dragging the brilliant Diary out that mixed up mind of his and keeping the site going along with our best wishes to Hector resting up in his caravan.

Most of all though, thank you all for your support and remember the site would be nothing without fans and fandans alike.

Hail Hail everyone for what has been a great season, one we should never ever take for granted, well not until we get the Holy Trinity – Trebl3 Trebl3

Great day it was and even better night.

A terrific season great diary and read my posts yiu know they make sense, congrats to Boyata off to the World Cup with Belgium could Celtic have a World Cup winner in the ranks next season?

BJF… that might shut Monti up for a day or two 🙂

Naw it would not

It is wondrous time we live in..
The world needs its dreamers…may we never wake up 🙂

Thanks for all the diaries over this season. For my fellow crackpots on here, thanks for the laughs, the opinions and all the new information I’ve not garnered from yous. Most of all thanks for talking a whole load of shite it’s made my day pass a lot quicker. GG&W

Vote Up0Vote Down
The wee man

Great time to be a Celtic fan. Ignore the detractors and enjoy the ride. Champions league is something I feel we punch above our weight in and some of our support have unrealistic expectations of. Without being unambitious I like to see us reach the group stages. Anything beyond that is a bonus to me given the limited resources
of the league we play in. Think I’d be happy with a treble treble 10 in a row and regular CL to be honest. Mon the hoops. Make it happen.

Good one,Des.
Like the line,the pish really really flowed.lol
For male Tims mainly,getting up 6 times in the middle of the night for a pish,after major celebrations,you still think,what a wonderful day it has been.
As for Eddy ? Ralph has gave us McGinn has signed or will sign.Does this apply to Eddy,as well ?
Ralph puts in a lot of work,’re Diary.A real labour of love.
I always read,don’t always comment.
Have a great summer,to all at Etims.Thanks for all your pieces.
Cheers.

I think beating the reprobates 3-2 at the Stade de Tears was our turning point and it totally demolished any thought that there might be a challenge from William. I don’t have any Hun pals but looking at all the comments on social media it was cruel according too them. More cruelty in the pipeline? yes please.

Noel…is that the same pipeline that the huns steal water from the Church int ibrox lol?

When the middle aged men are racing to the railings after a goal, you know there`s a reason to celebrate in this day and age.HH

I have said this B4 and I ll say it again 10inarow lets stay focused and Brendan & Co will lead us there and beyond if he stays, it would seem that most fans will be happy with C.L. FITBA’ and the Holy Trinity of trebles , sounds like a plan to me , we have the hunnish hoards fae hades in a arm lock lets keep them there 4ever I Love feeling their pain.Long may it continue DEO GRATIAS & HAIL HAIL THE GHODS ARE SMILING ON US FROM ON HIGH.

I truly think with a good draw and some luck, we have a team gelling that could win the Europa League and even do better in the Champions League.
Next season, we have to be more ruthless domestically and make Celtic Park a real fortress once more.No more drawn matches at Celtic Park.
It will be fun slapping down Sevco and their unproven manager….think John Barnes.
I think Christie and Morgan can really help and John McGinn too if he’s interested.
But for now, I am the cat that got the cream.
Onward and upward, Hail, hail…

RThank you for the diary. Brings a real cheer to every day. Love your humour and banter (and pish!)

Monti… Good day all round HH

His name is Jimmy Bell 🙂

he hates all the kafflicks.

I finally watched Brown’s testimonial game and thoroughly enjoyed it even although it was a makeshift Celtic team playing. It is dangerous to try to draw firm conclusions from a game like that, but when did that stop me? If the displays by certain players were typical of their abilities then I risk the following observations. Jack Henry will not make it at Celtic. Because he is a BR signing he will get more chances than he deserves but he will cost us games. Mikey Johnson has the skills to make it if he is given a chance. He will… Read more »

Rebus,
Regan Hendry is the young midfielder who came on. He is the capt of the Development team. When Roberts first came Hendry linked up well with him and set up a few goals for Paddy. Not sure if he will get a chance but he is a reliable player with a brain.
WW Willie Wallace

Vote Up0Vote Down
← Celtic Diary Monday May 21: All Done
Celtic Diary Tuesday May 22: Any Other Business ? →

RT @Jim_Gardner The Pope reportedly isn't feeling well with a respiratory infection. Vatican won't say if Francis is being tested for #coronavirus pic.twitter.com/toaMbRoisE

RT @lanPaisleyMP I've stocked up on face masks, Detol, rubber gloves and bleach. Fuck all to do with #CoronaVirus - we are flying out of Dublin on Monday and there's a terrible smell of Mass about the place.

RT @_youhadonejob1 Chinese wallet is speaking the language of all of us. pic.twitter.com/SM1gqK5z64

RT @I_be_MarkB When they invented the Internet, I’m sure they had this in mind? twitter.com/chrishawkinsuk…