Browse: Home   /   So Tell Us About Rosenborg 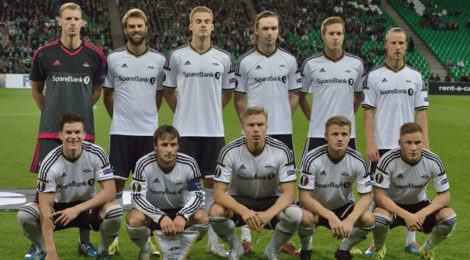 So Tell Us About Rosenborg

We asked our old ETims friend Wolfie “Wolfie” Smith to give us his detailed local insight into Rosenborg. Enjoy…

Rosenborg BK is a name known to Celtic fans. From their tremendous 13-in-a-row league wins from the early 90s to mid 2000s, to their regular appearances (and victories) in the Champions League, it was a Club that demanded our respect. With an attacking style – developed by the legendary coach Nils Arne Eggen – based upon teamwork, workrate and rapid transitions from defence to attack, they regularly punched above their weight. While a wealthy team in Norway – aided no doubt by the lucrative CL monies – they operate with a budget substantially below that of Celtic. Without doubt over the years, more than one envious glance was cast from the East End of Glasgow to the Lerkendal Stadion in Trondheim, both from the Boardroom and from the stands.

The departure of Nils Arne Eggen precipitated the decline of RBK. The won another couple of Tippeligaens but the magic spell was broken. It was a club in decline. Winning the League only once in the next four years, the Club ran through a succession of managers and tried to buy success, losing the distinctive style and ethos that had made them so successful.

2009 and 2010 proved to be something of a false dawn. Rosenborg won the league both years but they were eclipsed by a resurgent Molde, who won three of the next four Tippeligaens. Strømsgodset, managed by our own Ronny Deila, took the other.

In 2015, former player and Nils Arne Eggan disciple, Kåre Ingebrigtsen took the reins in the Lerkendal stadion. In his first season, he delivered the double. A feat he repeated in his second. A very impressive turnaround for a side that had been struggling. This season, Rosenborg sit atop the League again, with 25 points from 17 games, 5 ahead of Sarpsborg and 7 over Molde. This is closer to the Rosenborg of old. A team that likes to attack, that keeps the 4-3-3 formation, that presses high up the field, whilst not quite hitting the heights of their illustrious predecessors.

It’s a team that gains its strength from the collective, from its willingness to work for each other, rather than through technically gifted or exceptional individuals. It is a team that is organized, disciplined, where each player knows exactly what his role is and what is required of him. It’s a style of play where high tempo and workrate trump technique and artistry.

Their strength is undoubtedly in the midfield three of Jensen, Konradsen and Midtsjø. Konradsen anchors the midfield three and, despite failing to make much of an impact with Stade Rennais, has been a key player for Rosenborg. Captain Mike Jensen, formerly of Brondby, is another tidy, industrious player who was voted Player of the Year in 2016. He will play on the right hand side of the three. Fredrik Midtsjø will play on the left hand side.

While, for my taste, lacking creativity and technique, the Rosenborg three work very well as a unit. They will maintain a high tempo, press our midfield players and look to break quickly when in possession. They prefer to move the ball forward quickly with direct, incisive passes rather than our own method of possession football and moving the ball quickly from side to side, probing for weaknesses. It’s noticeable that they like to find space wide and fire balls into the box, where they seek the target man or the midfield runners arriving late.

In attack Dane Nicklas Bendtner has replaced the departed Christian Gytkjær and takes over the target man role. Pål Andre Helland plays on the right hand side of the front three, while Yann-Erik de Lanlay will play on the left hand side. Bendtner is a known quantity and has had a decent enough start in Norway, scoring 6 goals in his 16 league appearances. The Dane’s physicality might cause our defence problems, especially given the absence of Boyata, and the wide attackers mean our fullbacks will have to be more mindful of their defensive duties. I don’t particularly worry about how we would handle the Rosenborg front three however. As ever, I think preventable errors are our most likely cause of conceding.

Perhaps surprisingly for a Norwegian team, I’m not impressed with the Rosenborg defence. The goalkeeper, André Hansen, is solid enough, if unspectacular. The Icelandic defender, Hólmar Örn Eyjólfsson, seems to be missed in the centre of defence after his departure to Maccabi Haifa. Jørgen Skjelvik has been moved from left back to central defence alongside Tore Reginiussen. Viewers of the games against Dundalk will have seen how suspect they were at dead balls, the Dundalk goal coming from a corner and an extra time chance that struck the bar was similarly from a set piece. I expect a line lead by Dembele and flanked by Sinclair and Forrest will be able to cause them all sorts of problems.

When evaluating Rosenborg players, it’s easy to slip into a like for like comparison with their Celtic counterparts and come to the conclusion that none of them would be first team starters for us, ergo we should win easily. Unfortunately, it’s not as easy as that. You can easily make the same points when comparing Celtic to our nearest challengers, Aberdeen. We are undoubtedly a better side, no Aberdeen player would start in our team – their best player has become our backup wide man – but they have given us decent and challenging games.

Rosenborg’s strength is their teamwork and their system. They know exactly how they should play, they know the formation and they stick to it. They are also well into their season while we have played a grand total of 2 competitive games. Going back to the Dundalk games, it was clear they enjoyed a fitness advantage over the part-time Irish team. I think they will be hoping that their fitness and match-sharpness advantage over Celtic will overcome the technical gulf.

I would prefer to be at Celtic Park for the return leg. I can’t imagine that Rosenborg would fancy travelling their needing to gain a result. However, I don’t see Rosenborg changing their style between the two matches. They’ll press, harry and try to get the ball forward quickly whether they are home or away. We should not be afraid to try and dominate possession in both games. We have the technical and physical players to do so.

Individual errors or bad luck can change a tie in a moment, especially with conceding the dreaded away goals. However, there is nothing we can do about that. These things will happen or they won’t. When I consider both legs, I think the main determinant is how we play. If we are on our game, if we can stand up to the pressing and physicality of the Norwegians, if we can pass the ball quickly and accurately, we will cause them many, many more problems than they cause us. We are a technically superior side and, hopefully, just as organised and just as tactically astute.

If we play to our potential, we should progress to the next round. We’d better. We need Champions League football and I have a bottle of Aquavit riding on it!

As a celtic fan living in Norway for a long time this is s pretty accurate analysis, if celtic play with no fear they will beat them soundly if not it should at least be a messy scrap

Excellent summary, Without the physicality of Dembelle and Griff. being banned, the semantics change by a small degree. Our front 3 of Sinclair, Forrest and Hayes will provide them with a stern test, and when you add Rogic and Armstrong into the mix plus Ntcham, that plus being at home should make us big favourite’s. For me the biggest threat that Rosenborg face is oor Brendan and his management team, they will have the threats of Rosenborg firmly in their minds and will have the team well briefed. Like the wolfie says or wis it you hector, (well done with… Read more »

Good stuff very informative bud. Organised sides who press us high do tend to give our defence problems at times. Craig Gordon tends to be a bit edgy and panicky with the back pass when teams press us l feel so here’s hoping he has a good night. For this reason l Hope Brendan doesn’t alter the back line too much and keeps it fairly straightforward perhaps bringing in Ajer as a deep lying DM instead of messing with the wing backs Lustig and Tierney. Extra cover for the ball ove the top and a quick outlet when in possession… Read more »

Excellent article. Thanks. Makes me a bit nervous though. Norwegian teams can be hard to handle. They are usually fit and well-organized.
I think Brendan will go with 3-1-2-3 again.
Gordon
Lustig/Simunovic/Tierney
Brown
Ncham/Armstrong
Forrest/Rogic/Sinclair
2-0 to the Bhoys but we would want more.
A tricky tie.

RT @DalaiLama The purpose of life is to be happy. This is what all human beings have in common—the wish to lead a happy life. Many think that happiness is to be found outside us in material things, but actually it’s something that comes from within, from warm-heartedness and concern for others

RT @Wiznyme1 @BBCDouglasF The BBC, died defending the Tory government & a Union that stabbed it in the back. pic.twitter.com/2VMakSvCUX

“See who’s on your side” There’s definitely a parallel universe out there for those of us in Scotland watching the BBC since pre-2014 to date in their coverage of politics and football! twitter.com/bbcdouglasf/st…

RT @SmnLlyd5 The word gets overused but Harry Gregg was genuinely a hero. Sad news. pic.twitter.com/uV7xSOWsBi

RT @paullewismoney The new Chancellor has been asked to put off this April change. It may be too late. pic.twitter.com/KIITjntxrJ