Browse: Home   /   An Away Day with the Lisbon Lions 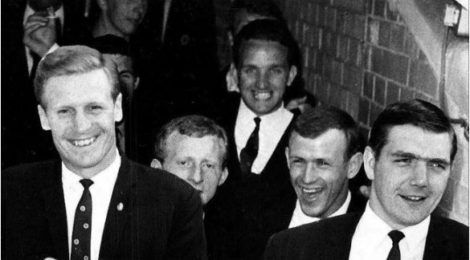 An Away Day with the Lisbon Lions

An Away Day with the Lisbon Lions

Being a season ticket holder at Celtic Park for many years, my dad was on nodding terms with many of the Celtic squad/management team of the day. In addition, as dad worked as a sales rep in the Glasgow drinks trade, it was no surprise he knew personally many Celtic football players and coaches, as they drank in or owned pubs across the city. In addition, mum and dad attended regularly the Vintners dances in the west of Scotland, where they mixed with the players, ex-players, managers and their wives. This helped immensely when dad, brother Martin (10 years old at the time) and I (12 years old) had a few days spare during one summer holiday. Dad asked if we would like to travel to St. Etienne in France to see Celtic play in a friendly – we excitedly volunteered to go on the trip, which we would leave the car behind and hitch-hike instead. What an adventure this turned out to be:

We left Baillieston one evening and walked a mile or two downhill to Broomhill, at the corner outside Glasgow Zoo, and started thumbing for a lift. In those days this was second nature for travellers, and every main route had the usual thumb jutted out along with a placard indicating M6, SOUTH, BIRMINGHAM or whatever. After approximately 15 minutes wait, a large fish lorry turned the sharp corner from Baillieston to join the main road south. On seeing the raised thumbs, the lorry pulled into the lay-by beside us, and on opening the large door above us, is dad not greeted with “ Hello Vincie, where are you off to then?” by the smiling driver. When told we were off to France, the driver enquired if Dover was far enough!!! What a stroke of unbelievable luck, as we started a journey down to the south of England in the company of Sammy.

I can still recall sitting astride the carpeted engine compartment between the front seats in the huge cab, in what was the highest machine we had ever travelled in, sitting above the cars down below. We spent many hours driving down south in those days, and enjoyed stopping off at the transport cafes on a regular basis, where dad insisted not surprisingly on picking up Sammy’s tab for huge steaming mugs of tea, slices of bread and large platefuls of food. Strange how the smells of the cafe, the diesel, the warm engine compartment can still be remembered…

After waving farewell to Sammy, who was at Dover to collect fish from France for his return journey to Glasgow, we travelled by ferry across to Calais. We were old hands at this by now, having travelled abroad most summers in the family VW camper to France, Belgium, Holland and Germany. Once we reached Calais we headed for the outskirts, and soon had obtained a lift taking us south. This was the first of many lifts, as they tended to be for short distances – or perhaps we had just been spoiled by Sammy’s generosity and it would be difficult to match a 500 mile single lift. The weather was scorching, and I recall on reaching Paris, Martin and I spent time running repeatedly through a spray from a hose-pipe in the middle of a roundabout full of flower beds to cool us down. Mad Scotsmen out in the midday sun!

We then found it difficult to obtain a lift, and we walked for miles in the blazing heat into the outskirts of Paris. We ended up on a long tree-lined road heading south, and after a lengthy walk we spotted a roadside bar at the bottom of a steep hill. What a relief it was to sit down at last, as we enjoyed cokes and dad gratefully emptied a long cold glass of beer. However, this was soon spoiled as we detected the smell as the French lorry driver’s devoured huge bowls of tripe and onions. We left the delights of tripe behind, and continued to obtain numerous lifts as we travelled south.

On the outskirts of the city of Lyon, a large car stopped for us, and the gentleman explained he was the president of Lyon Sporting Club, which comprised the football team as well as basketball, tennis, rugby, hockey teams etc. He enquired if we had eaten, and was therefore delighted to take us back to the boardroom of the Sporting Club, where he ordered the chef to prepare us a meal of steaks. How could we refuse such generosity when these pieces of meat oozing blood in the French style were presented to us with all the accompaniments – it was a struggle for Martin and I to finish our meal, as we had never tasted half-cooked meat like this before. We left the beautiful city of Lyon after spending time walking along the riverside, watching the continuous traffic of the barges as they transported goods up and down the river, and were soon in St Etienne.

As usual the Celtic support had taken over yet another town square and were conversing in pidgin-English as they mixed with and toasted the locals. We spent some time there, and were asked by a local photographer and journalist for our story of why we were there, where we came from etc, and this article duly appeared in the local paper. We were even taken to the paper to see how they made up the story (pre-computer) and part of the article which went into the pressing in the metal plate was presented to us as a souvenir of our trip.

Dad then took us to the team hotel, and we were in awe as we spent time walking between Jimmy Johnstone, Bertie Auld, Bobby Lennox, John Clark, Billy McNeill and the rest of the Lions, gathering autographs and chatting, as well as meeting the manager Jock Stein. Dad spoke to one of the Lions, whom he knew from attending dances in Glasgow, and he enquired where we were staying that night. Dad replied we would head off soon and find a cheap bed and breakfast nearby, but we were told not to be silly, return in a few hours after eating an evening meal, and search the player out in the resident’s lounge. This we did and were told to head up in the lift to a certain room on the 3rd floor. This we did and we were let into the room by another player who was sharing as they always did in pairs on trips abroad.

What then happened was the players shared one double bed, my brother and I shared the other, and dad slept on the floor in one of our sleeping bags. In the morning, we three were ushered into the bathroom as the maid arrived with double breakfasts, as the players had phoned room service to explain they were hungrier than usual. All 5 of us then shared the breakfasts between us as we chatted about football. How this act of generosity has stayed in our memories, and we are grateful that players used to living well could treat ordinary fans in such a kind way.

We travelled that evening to the game, and enjoyed ourselves before heading back on the return journey, this time without incident.

Many years later my wife and I were in Majorca, and I was sitting at the edge of the pool at our apartment in Santa Ponsa. The Lisbon Lion who had invited us to stay in his room swam by me, and taken by surprise I simply said hello, and he replied. I then spotted his wife and children sitting with friends, so I decided not to annoy him. I thought this was one of his first few days there, and that there was plenty of time to introduce myself and offer to buy him a beer and explain the reason why. However, I never saw him again there, and on explaining this situation with his friend the next afternoon, he said the ex-player had been staying in a villa along the coast, and had left that morning to return home.

25 years later I introduced myself to a guest speaker (one of the 2 Lisbon lions who offered hospitality in St Etienne) at Stirling golf club Speakers Night. I handed over this printed extract from the St Etienne trip to the Lisbon Lion in person. He recalled knowing my dad and indeed a brief summary of the unforgettable trip from my childhood. 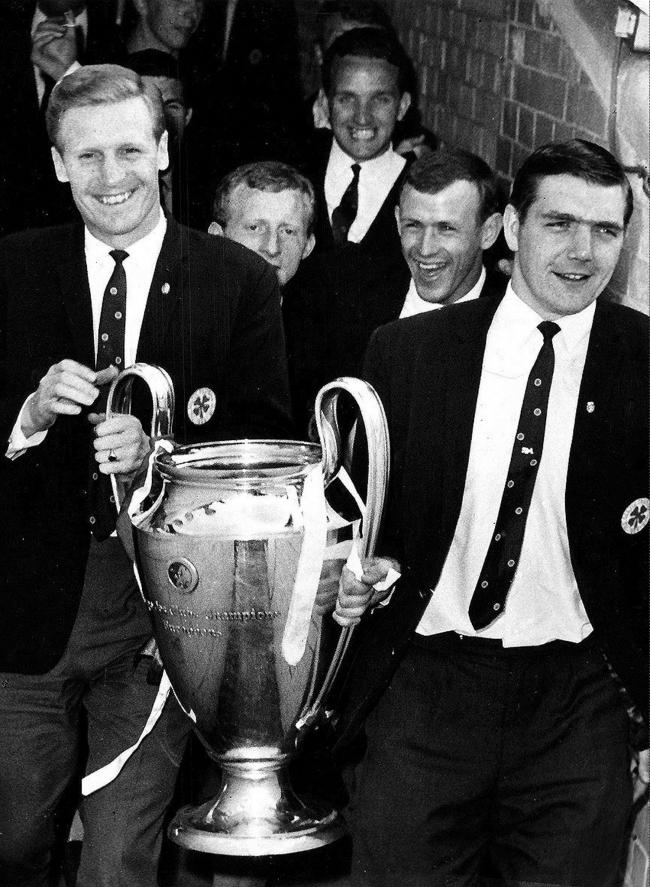 Grateful thanks to Billy “Cesar” McNeill, our captain & leader and his defensive stalwart and pal John “Luggy” Clark for the memory of a lifetime. Hail hail 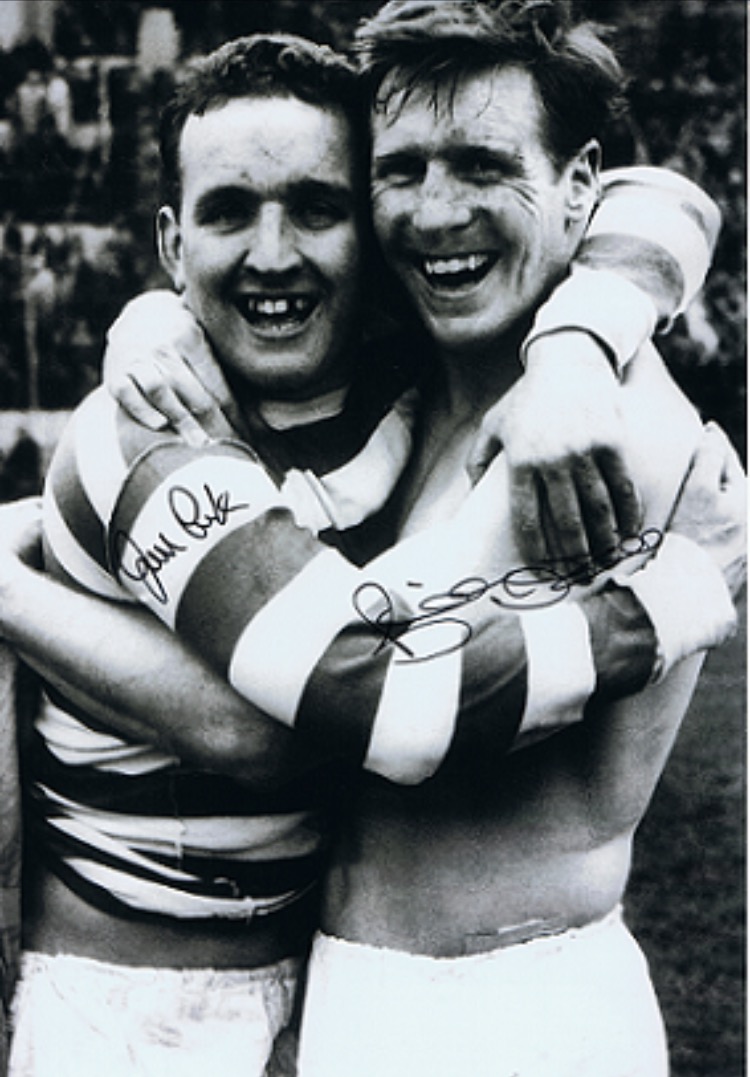 Wonderful read Baillieston, A couple of things, you are a lucky bassa, I well remember the French local’s, having visited those lovely French cities, with my young family, a great time. Well done and H.H. to Sammy, your da and brother and well done to el Presidenty. The French love the Scots and it is so obvious by the warmth of their welcome. But to meet and be greeted by that wonderful team and Manager, just once again proves the humility of those wonderful and talented players, no wonder that they are loved so much by so many people. I… Read more »

A joy to read this story….